Metaphorically Sleeping with the Enemy 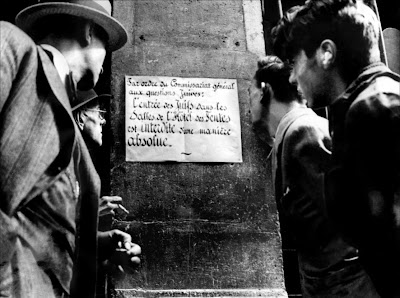 I alluded to this when I watched Hotel Terminus: Marcel Ophuls has a one-track mind. As a Jewish survivor of World War II, Ophuls naturally has a deep and abiding hatred for the Nazis. However, his true wrath is reserved for those who assisted them without being members of the party. In Hotel Terminus he explored those who assisted Nazis fleeing from Germany after the war. In Le Chagrin et la Pitie (The Sorrow and the Pity), his ire and frustration are reserved for those French citizens who collaborated with their conquerors.

To make his point, Ophuls mixes interviews with resistance fighters, former German soldiers, and in particular a French soldier who fought on the Eastern front in a German uniform and a great deal of archival footage from the war. The points and comments made through the interviews are thus enhanced by these flashes back into the past.

Ophuls’s goal, evidently, is not simply to expose the collaborators for what they were, nor is it to allow them to justify their actions. What Ophuls really wants is to discover the reason that a French person would decide to assist those who had invaded his or her country and further the ends of a military that has proven itself to be hostile. Why, he wants to know, would any Frenchman don a German uniform and fight for the enemy of France? Could such an action be justified? Could there be a legitimate reason for abandoning France in this way?

The answers are both interesting and disturbing, and like the Nazis themselves, speak to the baser, uglier side of human nature. Most of the reasons cited are anti-Semitism, xenophobia, fear, a desire to survive, an assumption that German occupation was inevitable and could not be fought, and anti-communism. A few of these reasons—namely fear and a desire to survive—are treated with a bit more understanding than the others, and truly these are reasons that are a bit easier to understand.

It seems that in this film, unlike Hotel Terminus, the goal of Ophuls is less to point the finger and accuse and more to gain understanding of the how and why collaboration could have and did happen. The idea is less to condemn (although Ophuls appears to be unable to breathe without finding someone to blame) and more to understand the why. Ophuls allows people, particularly the collaborators, the opportunity to justify their actions during the war, and thus in many ways to blame and accuse themselves.

Undoubtedly, a vast amount of footage was created to construct this documentary, since it appears in two distinct parts, each lasting longer than two hours. Additional proof is that Ophuls shot the bulk of his interview footage in 1969 and the film was not released until 1971, indicating a long and involved editing process. What I honestly wonder as a viewer was if Ophuls couldn’t have made his legitimate points in something a bit shorter. Was it necessary to have more than four hours of interview and archival footage to explain the actions of the collaborators? Ultimately, the actions come down to those who wanted to guarantee their own survival and those who were more worried about Bolsheviks and Jews than they were about an oppressive regime from over the border. The tendency is to look at the first group as cowardly and the second group as something approaching inhuman. The first can be understood, if derided. The second does seem to warrant a bug-under-a-microscope sort of scrutiny. But even this sort of study isn’t that difficult in the conclusion: it all boils down to fear. Some people fear for their lives; other people fear anything different. Close curtain. In fact, in the first section, one of the interview subjects says flat out that anti-Semitism became a point of agreement between many Frenchmen and Germans.

Ophuls spends a good deal of time discussing the film Jud Suss (as near as I can figure, the translation is Suss the Jew) and many other German propaganda films of the day. These films naturally support the idea of the Reich and also tend to make further villains of the Jews. It’s an interesting film based on the clips, simply because it really looks like the Jew is the most sympathetic character in the film. We’re told that most of the French stayed away from the propaganda films, but those who saw their own biases reinforced tended to go to this and other movies from Germany. A part of the attraction was that while the films were German, many of the actors were French.

Le Chagrin et la Pitie is an interesting film, but it feels too long by a half. Ophuls certainly has a point, but in the end, he’s not beating a dead horse, but jumping up and down on a damp patch where a dead horse used to be.

Why to watch Le Chagrin et la Pitie: Some history shouldn’t be forgotten.
Why not to watch: While Ophuls is right, does he need another four hours to prove it?
Posted by SJHoneywell at 11:13 PM