I've done a little re-arranging, adding a new page here for movies that aren't on any list but that I've watched because they were recommended. I'm still working on that and it should be finished soon. I've got so many recommendations for the last few years that it felt like I needed a separate page for them. This only applies to full reviews, not the ones I've posted on recaps like this one. Anyway, here are the last few I picked up in January.
Read more »
Posted by SJHoneywell at 7:02 AM 5 comments:

Email ThisBlogThis!Share to TwitterShare to FacebookShare to Pinterest
Labels: Sky High, The Doors, The Pale Blue Eye, The Way Back, What I’ve Caught Up With

I said last month that I was going to try to put more reviews up and watch more movies, and I think I've done that so far. In fact, I caught up with so many movies in January that I can't fit all of the names in the labels section, forcing me to split this post in two. There will be another chunk of movies tomorrow. It honestly feels right and good to feel back in the saddle here and watching movies again. There were a few dark months last year, but I feel like I'm back in a lot of respects. Tune in tomorrow for some additional catch-ups.
Read more »
Posted by SJHoneywell at 1:40 PM 5 comments:

Email ThisBlogThis!Share to TwitterShare to FacebookShare to Pinterest
Labels: Doctor Strange in the Multiverse of Madness, Hitch, Kick-Ass, Mrs. Palfrey at the Claremont, The Darjeeling Limited, Tumbling Tumbleweeds, What I’ve Caught Up With

Email ThisBlogThis!Share to TwitterShare to FacebookShare to Pinterest
Labels: 2021, Being the Ricardos, Best Actor, King Richard, Oscar Fucked Up, The Power of the Dog, The Tragedy of Macbeth, tick…tick…BOOM!

Return to the Danger Zone

I’m not going to lie; Top Gun: Maverick had a real uphill climb for me. I’m not a fan of the original film at all. I don’t care that the original Top Gun is the gayest thing I’ve ever seen, and that includes Brokeback Mountain and Cruising. My problem with Top Gun is that you could not ask for a better advertisement for the military-industrial complex. Want a collection of young kids you can send off to war? Show ‘em Top Gun and get ‘em ramped up on patriotism and the desire to go fast, and you’ve got your lambs for the slaughter.

Top Gun: Maverick picks up multiple decades after the first movie—as the original took place when it was filmed, so too does this sequel. Our boy Peter “Maverick” Mitchell (Tom Cruise) is still flying for the Navy, and still at the rank of captain since his frequent insubordination keeps him from getting further promoted. His old friendly rival Tom “Iceman” Kazansky (Val Kilmer) now commands the entire Pacific fleet, and is the only thing that keeps Maverick still flying. 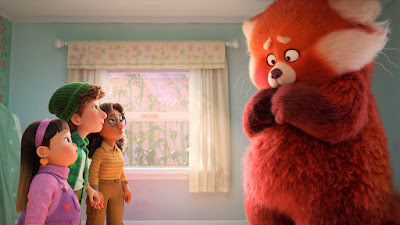 I knew when it was released that Turning Red was going to be nominated for Best Animated Feature. I had all sorts of good intentions about watching it before the Oscar nominations were announced, but I found it more and more difficult to watch movies toward the end of last year. So, here we are and I’ve finally gotten around to watching it. All I knew going in was that it was controversial, mainly because it dealt with (gasp) a bodily function that women go through. The horrors of kids finding out about the menstrual cycle.

And, honestly, that ends up being one of the most meta moments of Turning Red. A substantial plot point in the film is that our main character Meilin (voiced by Rosalie Chiang) deals with a terribly overbearing mother, Ming (Sandra Oh). A large part of the plot happens specifically because Ming is a helicopter mom, desperate to keep Meilin from anything that might possibly hurt her…and the main objection to the film by the conservative wing of Americans is that it includes a topic that they don’t want their kids to know about.

Giving Someone the Finger 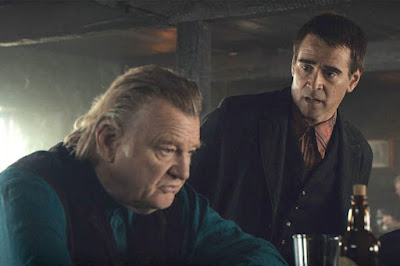 The Banshees of Inisherin has attracted a great deal of attention this award season, including nine Oscar noms, with four of those in acting categories. I went into it with some worries, though, because of two of the actors. Colin Ferrell has been nominated for Best Actor. I’ve learned to appreciate Farrell, but I find him really hit (After Yang, In Bruges) and miss (The Killing of a Sacred Deer, The Lobster). Possibly because my first encounter with him was Sacred Deer, I am not too keen on Barry Keoghan, one of the film’s two Best Supporting Actor nominees. So, I was hopeful, but a bit trepidatious.

This seems like a very simple film on the surface. In the years between World War I and II, on the island of Inisherin off the west coast of Ireland, life is simple and unassuming. Pádraic Súilleabháin (Colin Farrell) supplies milk to the local market and spends his afternoons drinking with his best friend folk musician Colm Doherty (Brendan Gleeson, also nominated for Best Supporting Actor). And then, one day Colm announces that he no longer wishes to spend any time with Pádraic.

Email ThisBlogThis!Share to TwitterShare to FacebookShare to Pinterest
Labels: 2021, Being the Ricardos, Best Actress, Oscar Got It Wrong, Parallel Mothers, Spencer, The Eyes of Tammy Faye, The Lost Daughter
Older Posts Home
Subscribe to: Posts (Atom)