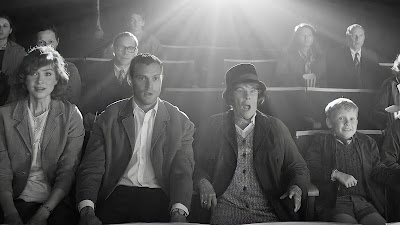 Year 13 is in the books. Thirteen years. Amazing.

So I wasn’t particularly productive for much of this year, and especially in the last couple of months, I haven’t watched much in the way of movies. I’ve spent a lot more time in the world of television these days, rewatching Burn Notice, M*A*S*H, and watching The X Files for the first time.

And so, as tends to be the case, I’m looking to revamp in 2023. I’ve got a couple of Oscar films to watch from last year, and will finish up just in time for award season. I’m setting 400 movies as a goal for this coming year, finishing up as much of the recommended movies list as I can as well as finishing up as much of the horror movies list as I am able.

Posted by SJHoneywell at 1:27 PM 6 comments: 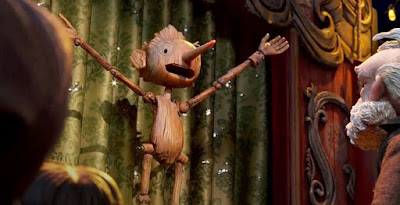 It was always going to be a case of “when” when it came to Guillermo del Toro’s Pinocchio. I will watch anything that del Toro does, and at the very least, I needed to keep my streak of seeing everything the man has written or directed alive. I also knew that this has been a passion project of del Toro for years, and if nothing else, that’s going to make it worth seeing.

On the surface, this version of Pinocchio would seem to be just another version of the story that everyone knows. That truth doesn’t go beyond the surface, though. This is a complete reimagining of the basic Pinocchio story. The basics are still the same—an old man carves a wooden puppet that, through some magical means, the puppet is granted life. Through a series of Cmisadventures, and guided in some respects by a cricket that acts as his conscience, the puppet learns life lessons on his way to becoming a real boy.

This has been a difficult year in a lot of respects. Over the past couple of months, I’ve had a hard time getting here, thanks to a lot of other things going on. Work has been a bit of a crusher, too—I’ve had three different managers in 2022, so it feels like constant upheaval and chaos. I’m hoping for some more normalcy in 2023. Lord, 2023—when I was a kid I never really though I would make it to a year with this number on it. It wasn’t that I thought I would die before I hit this age. It was more that a year with this number was just inconceivable. Anyway, it’s a tradition that I suggest 10 movies for the 1001 Movies list every year. I could say that since there was no new book this year I could skip it, but sometimes one tradition needs to keep going.
Read more »
Posted by SJHoneywell at 7:36 PM 8 comments: 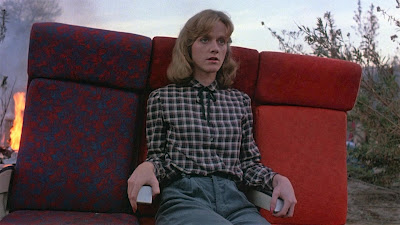 Sometimes, someone comes up with a really good idea for a story. Sole Survivor is like that. It’s a really solid premise for a movie and it plays out really well. It’s a good enough idea that it spawned an entire franchise a decade and a half later. In a lot of obvious respects—and this is not a secret--Sole Survivor is the ur-version of the Final Destination series. If you go into this without knowing, it would be really obvious once you get the premise, and even more obvious once the movie starts.

There are some differences, of course. In the Final Destination movies, our heroes avoid the tragedy that happens or would have happened because of a premonition. That doesn’t happen here. For starters, the premonition comes to Carla Davis (Caren Larkey), a washed-up actress of old beach party movies, who has been hired for a decaf coffee ad. Her premonition is about the producer for that ad, Denise Watson (Anita Skinner). All she knows is that something bad is going to happen, but that Denise will survive.

November was a rough month for me, mostly because of work. I didn't watch a lot of movies in general--in fact, I went almost two weks without watching anything because of work. I've got a couple more weeks of that, and then life returns to normal, or more normal anyway. I managed five movies off the list, which is honestly a bit disappointing. A lot of my viewing time has been spent on things like The X Files and a rewatch of M*A*S*H more or less as background noise. Fingers crossed for December.
Read more »
Posted by SJHoneywell at 4:10 PM 6 comments:

Email ThisBlogThis!Share to TwitterShare to FacebookShare to Pinterest
Labels: C’mon C’mon, Crank, Enchanted, Love and Death, The Big Clock, What I’ve Caught Up With 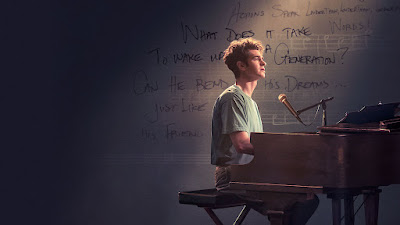 When I was an undergrad, I was an English lit major, and a lot of the people I hung around with were also English lit majors. There are few students at any college more pretentious and up their own ass than English majors. Once, at a party, a poet friend of mine had a fight with his girlfriend, and when she stormed out, I watched him count on his fingers for the right aesthetic moment to chase after her, into the snow barefoot, without his coat. I also dabbled in theater for a semester and even acted in a play. I say this to show that there are students who are more up their own ass than English majors; they’re all in theater. This is important, because tick, tick…BOOM! is very much about theater people.

I also need to say that when I started this blog a really long time ago, I was not shy about the fact that I’m not a huge fan of musicals as a genre. It’s probably still my least favorite genre of film in general, although I have mellowed on them in general. There is a subgenre of musical that I really don’t like a lot, though, and that’s musicals about musicals. This is important, because tick, tick…BOOM! is absolutely that.