The Levee's Going to Break 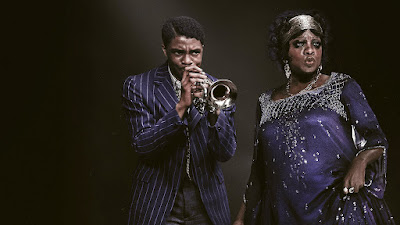 Sometimes you can tell that a movie isn’t merely based on a play but hasn’t done a great deal to separate itself from its staged roots. That was definitely the case with Fences from a couple of years ago; I knew that was a stage play within a few minutes despite not knowing it was a play. I experienced the same thing with Ma Rainey’s Black Bottom. And, with a little digging, it makes sense. Denzel Washington is the producer of this film, and it’s the second film he’s worked on from playwright August Wilson; Washington’s goal is to produce all ten of his Century Cycle. In that respect, the two movies are closely related.

Ma Rainey’s Black Bottom takes place in Chicago on a single day in July of 1927. Blues singer Ma Rainey (Viola Davis, who is almost completely unrecognizable) has been contracted to make a couple of records for a producer in Chicago by her manager Irvin (Jeremy Shamos). Her main trio of players, trombonist Cutler (Colman Domingo), bassist Slow Drag (Michael Potts), and pianist Toledo (Glynn Turman) arrive on time. Hot shot trumpeter Levee (Chadwick Boseman in his final role) shows up shortly thereafter sporting a new pair of very expensive shoes. Levee isn’t in Ma Rainey’s group for the long haul. He has been promised by studio executive Mel Sturdyvant (Jonny Coyne) that he can record some of his own music in the near future. 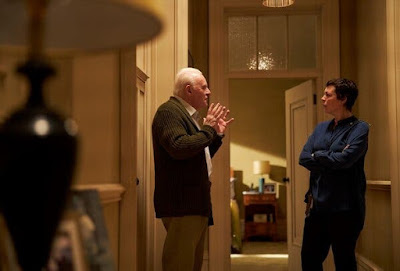 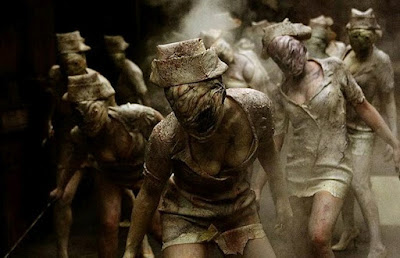 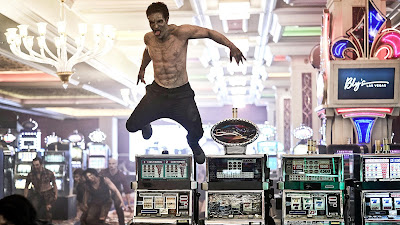 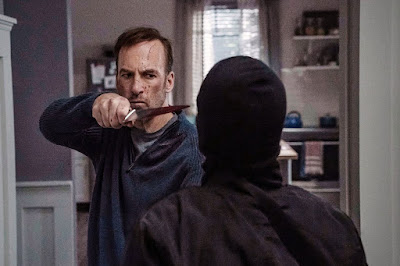 Before I talk about Nobody in detail, I want to talk in general about action movies as a genre. We live in a world that has a huge number of problems, many of which seem completely unsolvable. But whatever our problems, we have solved the issue of making action movies. Over the last number of years, movies that would qualify as close as we’re likely to get to perfection. John Wick, the Raid movies, Fury Road, Kingsmen, much of the MCU, and a few others are better than anything from the past other than what we’re going to remember based on nostalgia.

For good or ill, Nobody is going to join that company. Everything I have to say that is positive about this film is something that could equally be said in the negative. It is the same perfection of those films listed above, but that’s just it—it’s the same perfection. Aside from the details, there isn’t anything you haven’t seen before here. And that’s both good and a little disappointing.

Email ThisBlogThis!Share to TwitterShare to FacebookShare to Pinterest
Labels: action, Ilya Naishuller, Nobody 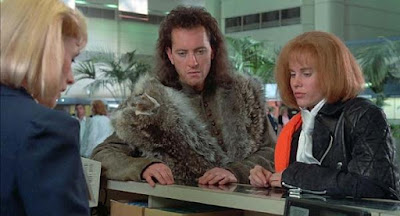 There are times when I think I’ve seen something before, but I’m not sure until a particular point in the movie. That was definitely the case with Warlock. I was almost certain that I had seen it before, but I didn’t have any real solid memory of it until about halfway through it. There are a couple of moments are surprisingly memorable. A couple for good reasons and one or two because Warlock has some effects that are almost embarrassing, even for 1989.

Warlock is a hard movie to place in terms of its target audience. There are some odd similarities to movies like The Terminator and Time After Time. Essentially, we have a, well, warlock (Julian Sands) several centuries past who is looking to complete a tome of power called the Grand Grimoire. The book has the power to, in the parlance of the time, unmake the world. But the warlock is foiled by Giles Redferne (Richard E. Grant). Still, being a warlock means having some powerful allies. He manages to free himself with the assistance of Satan himself, who whisks him a few centuries into the future to the film’s present. Redferne manages to follow and shows up in the present as well.

It's What's Inside That Counts

Films: Inside (A L’interieur)
Format: DVD borrowed from a friend on rockin’ flatscreen 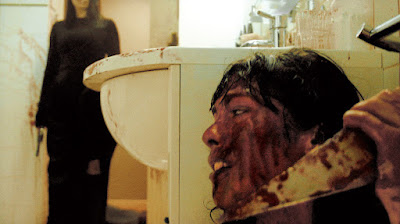 There are plenty of films that I don’t want to watch, and some of them I’ve managed to sit through. There are a few on the They Shoot Zombies list I’m guessing I will never see, not because I can’t find them but because I don’t want to sit through them. A film right on the edge of that line is Inside (or A L’Interieur if you prefer the French, since this is French Extremity). This film has an 82 minute run time and, depending on how you count things, somewhere between seven and 10 deaths. Seven of those are unbelievably brutal. This is a film that is absolutely painted in blood over the last hour or so.

I’m going to keep this simple, because this is not a film I can say that I enjoyed. We start with photographer Sarah (Alysson Paradis) who gets into a terrible car accident while five months pregnant. The accident kills her husband and the people in the other car.

In August, my wife and I became empty nesters. Kid #2 has headed off to college, and naturally that came with a few days of heavy lifting, moving, and dealing with COVID in crowds larger than I’ve become accustomed to. I also spent some time watching a few weird Ozploitation films like Turkey Shoot and Harlequin that weren’t on any lists. I’ve also been trying to gear up for Halloween, since I traditionally post 40 reviews over the last 10 days of October, and that requires a lot of advanced planning (I have 23 reviews ready, so I’m getting there). That being the case, it’s just a trio this month.
Read more »
Posted by SJHoneywell at 8:59 AM 8 comments:

Email ThisBlogThis!Share to TwitterShare to FacebookShare to Pinterest
Labels: American Gangster, Harlem Nights, The Seven Year Itch, What I’ve Caught Up With

I’ve always had a bit of a warm fuzzy for Aardman animation. I was introduced to Wallace and Gromit more than a couple of decades ago, and I’ve had a soft spot for them ever since. That said, I am less entranced with the Shaun the Sheep projects. If you don’t know the history, Shaun the Sheep is what we would have called a spin-off back in the day. He was a character in a Wallace and Gromit short called A Close Shave, and much like Snoopy in Peanuts cartoons, he soon became the focus. Shaun has his own television show, and now has two movies, the latest being A Shaun the Sheep Movie: Farmageddon.

The thing to know going into this is that Shaun the Sheep doesn’t talk. He laughs and makes a lot of vocal noises, but he doesn’t actually talk. None of the characters talk. I don’t know if this is the case for the television show, but for this movie and the previous Shaun movie (called, unimaginatively Shaun the Sheep Movie), the plot plays out in large respect like a silent comedy. Basically, everyone is Gromit in that respect.