The Key of L Sharp

I have to admit that I didn’t expect a great deal out of Studio 666. This is clearly something that Dave Grohl wanted to do and figured he could. In that respect, Dave Grohl is a lot like Snoop Dogg. Both of them have essentially won life and are now just playing through the side quests. So why not make a horror movie?

Of course that’s what Studio 666 is. With that name could it really be anything else? It’s going to feature the members of Grohl’s band Foo Fighters as movie versions of themselves, more or less. I honestly don’t know enough about them to know how much their portrayals are exaggerated for the film. I imagine, like many instances like this, that these are intensifications of who they are.

Horror movies have always been sort of the red-headed stepchild of movies. While some are certainly as good as you’ll get, as a genre, it’s looked down on in general. That’s even the case when you have an actor like Boris Karloff who is far classier than the genre would have you believe. The Black Room is a film that was billed as a horror movie, although there’s not a lot here that would qualify it as horror today. It’s much more of a thriller than anything else. It’s also a dandy little film that could really stand another 15 minutes of screen time. That said, it really does a fine job of tying everything up in its short little package.

We start with a twin birth near the start of the 18th century. The twins, Gregor and Anton, have been born to the local baron. But the fact that they are twins is bad news for the family. The family history started with twins, and the younger killing the older in the black room of the family castle. The room is sealed off, but not before a prophecy is laid. The family will end as it began, with twins and the younger one killing the older one. 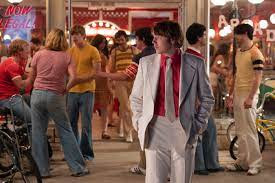 I looked forward to Licorice Pizza for some time, so when I saw it on the shelf at the local library, I snatched it up. I expected a great deal from this movie and the reviews would seem to back up that expectation. Four stars is by far the most popular review on Letterboxd, and the IMDb average rating is above 7 out of 10. Well, I’ve watched Licorice Pizza now, and I genuinely wonder what everyone sees in it. I don’t seek out movies where I disagree with almost everyone else. Sometimes, though, it just happens.

I’m probably not going to do a significant rundown of the plot of this movie because there really isn’t a great deal of plot. It’s very similar to a character study, except that it’s not a character study for one person but a relationship. A great deal happens in Licorice Pizza, but it all feels episodic. We’re looking at a series of unrelated events over the course of a year or so in the life and relationship of a couple of people.

More than a Bit of Barney 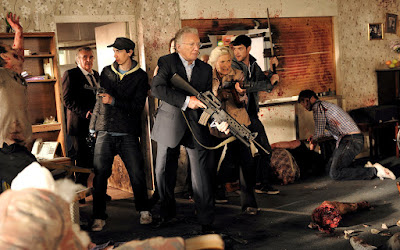 There’s a reason that zombie movies make really good fodder for comedy. It’s because zombies—the slow ones—are very easily made comedic. What makes zombies such fantastic monsters is exactly that. One zombie is at least potentially funny. It’s slow and clumsy. A horde of zombies is terrifying, though. As the numbers get bigger, the ability to fight them off is reduced. It’s easy to go from comedy to horror and back again. And that is the premise of Cockneys vs. Zombies.

On the surface, Cockneys vs. Zombies looks very much like its trying to capitalize on Shaun of the Dead and Zombieland, and honestly that’s not a bad thought. It very clearly is made in the same vein and is at least in part trying to do something very similar. The difference here is that we’re not looking at slackers dealing with zombies or the Odd Couple after the apocalypse, but Guy Ritchie meets Dawn of the Dead. What that means is that we’re going to be dealing with a bank heist that happens right around the same time that the zombies show up. 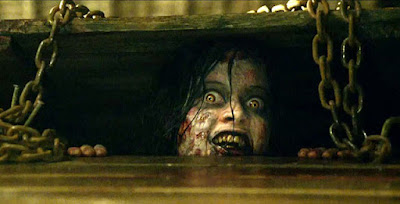 This is honestly probably the first time I’ve watched an entire movie on my phone. Why would I do that, you might ask. Well, since my run-in with COVID, I’ve decided that I need to get back into the gym. The place I go has very nice treadmills and such; they come with screens that show you wooded paths and the like. You can also stream things on NetFlix and a few other services. But they don’t do Tubi, and I had a hankering to watch the 2013 remake of Evil Dead. It was an interesting experience, watching a brutal horror movie in public. It was also an interesting experience seeing people attacked in the woods while walking on a treadmill with visions of a lovely wooded walk scrolled by.

This version of Evil Dead takes some license with the original story. Of course, it almost had to. The first Evil Dead is essentially the ur-version of a cabin in the woods story (okay, the original Night of the Living Dead might have a little to say about that, but I think the point stands). The plot of the original film is, essentially, five people go to a cabin in the woods. While there, they find recordings of someone reading from an ancient cursed book, and the recordings release demons into the world. So, it’s not like we were starting from a place of rich and deep storytelling.

May wasn't my best month personally. If you're wondering how long I would survive in a zombie apocalypse, it's two years and two months. I say this because last month, I got COVID. As predicted, I was killed by my family; my daughter came home from college with it. Get vaccinated if you're not--it wasn't nearly as bad as it could have been. I took eight movies off the list in May. Three of those I reviewed fully--Antlers, Ghostbusters: Afterlife, and Swan Song (the Udo Kier version). The other five are the ones listed below.
Read more »
Posted by SJHoneywell at 2:09 PM 8 comments: