If You Go Carryin' Pictures of Chairman Mao... 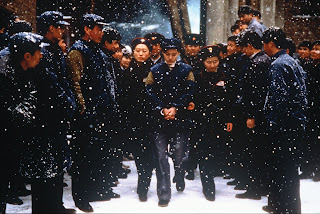 When one watches films only from one’s own cultural perspective, it results in an insular, narrow view of the wider world. Films like Lan Feng Zheng thus become important as a way to connect with the broader history of the world. I’m not old enough to know much about Mao’s reign in China; most of what I know comes from The Last Emperor, and it’s been years since I’ve seen that. Lan Feng Zheng takes place during three major Chinese revolutions and shows specifically how these affected the lives of the common people, or at least the lives of one particular family.

The film is told through the perspective of Tietou (Xiaoman Chang as a teen and narrator; Wenyao Zhang as a child; Tian Yi as a toddler). We start with the marriage of his parents, which happens just after the revolution that brought Mao and communism to power in China. Shortly after the revolution came the Hundred Flowers Campaign, which encouraged people to express their opinions of the Party, ostensibly with an eye toward improvement. In truth, it was a ploy by Mao to get critics to expose themselves. Those who severely criticized the Party were rounded up and sent to labor camps.

One of the most poignant and terrifying scenes comes in this section. Tietou’s father Lin Shaolong (Cunxin Pu) is in a meeting with colleagues and excuses himself to use the bathroom. When he has returned, the group has turned on him. They know that they must meet a particular quota of people to send away as traitors, and his departure from the meeting made him an obvious sacrificial victim. We also meet other members of the family, including Tietou’s mother Chen Shujuan (Liping Lu), her brother (Quanzhong Chu), who is a former pilot losing his eyesight, and his girlfriend Zhu Ying (Hong Zhang). Everyone seems to run afoul of the Party, eventually leaving the family much smaller and in hard times. Each is tragic and terrible in its own way. Zhu Ying leaves the Chinese Army in disgrace. As a dancer in the army troupe, she was essentially forced into becoming an unofficial prostitute for the Party brass.

The eventual death of Lin Shaolong leaves Shujuan desperate. She eventually marries his former colleague Li (Xuejian Li). This happens during the Great Leap Forward, one of the most disastrous economic policies in world history. The urge toward industrialization and collectivism cause a massive drop in productivity and, especially, food production, which led to mass starvation in China and Mao’s marginalization. Li is one of the victims, forcing the family on hard times once again. It’s of critical importance that we learn Li was the cause of Shaolong’s departure and eventual death—it’s more important the he tells Shujuan and that she already knew.

In the third and final part of the film, Chen Shujuan is forced into a third marriage, this time of necessity rather than of love or convenience. This coincides with the Cultural Revolution in which teachers, artists, and Party members were accused of Western thoughts and ideas and with wanting a return to capitalism. While this brought Mao back into power, it may have ultimately been far more destructive than the Great Leap Forward in the costs of destruction of Chinese culture and history. Naturally, the family’s luck holds steady on “terrible.” This new father figure for Tietou, called Step-Father (Baochang Guo) is one of those who is seen as being non-orthodox, and thus subject to terrible scrutiny and oppression.

It’s not typical that I have to spend as much time researching what a film is about to understand what the film is about. I blame my education for focusing almost entirely on Western history and events. But I wanted very much to understand this film. I needed to get not just the fact that these people were being terribly oppressed but the cause of the oppression. It’s important to know not just that the ideas are bad, but what it is that makes them bad. Not surprisingly, this makes Lan Feng Zheng a textbook film about the evils and dangers of communism. Little wonder that it was banned in its native China immediately upon its release.

This is a smart film, smart enough that it contains enough characters who stand on all sides of the issue. Chen Shujuan’s sister (Xiaoying Song) is a dedicated communist, thinking every action that supports whatever is going on in the Party is the right action and always looking out for any unorthodoxy in everyone she sees, including her family members. While she may be the minority opinion in the film, she is a necessary character here as a face to the oppressive society.

My biggest issue with Lan Feng Zheng is that we never truly discover Tietou’s ultimate fate. I understand the artistic decision here; it makes sense that we don’t know everything that happens to him, but it feels unfinished, or without resolution. After spending this much time with him and learning of the troubles he lived through, knowing how he ended up would give us the sense of closure the film lacks.

Even without this closure, this is a moving and important film, and it’s worth doing the research to understand the times to better understand the film.

Why to watch Lan Feng Zheng: Oppression always makes for great drama.
Why not to watch: Lack of a final catharsis.