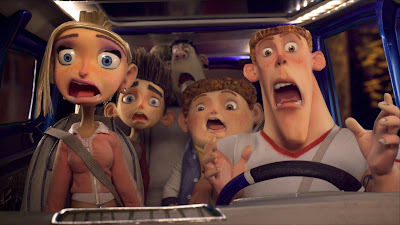 A couple of weeks ago, I ran a poll here to determine what new category of Oscar films I should add to the blog list. Best Animated Feature won in a close race, which turned out to be something of a relief—a few of those categories were pretty large. In the interests of getting things started, though, I figured I’d knock out ParaNorman, a recent film from Laika. I expected a pretty standard “scary” kids’ movie, which is not at all what I got.

Norman Babcock (Kodi Smit-McPhee) can see dead people. He can also talk to them. Since he’s the only person around who can do that, it’s no surprise that he is constantly bullied and harassed at school. It’s a little more of a shock that he’s bullied at home by his father (Jeff Garlin) and his sister Courtney (Anna Kendrick). His mother (Leslie Mann) is more sympathetic but still doesn’t much understand him, which makes his real support network the ghost of his dead grandmother (Elaine Stritch).

Norman lives in a town that has a claim to fame—they once had a witch who was executed there and who passed a curse on to the town. And it happens that the curse is coming up for its yearly checkup. Up to this point, it has been prevented from taking effect by the town kook, Norman’s uncle Prenderghast (John Goodman). When Prenderghast dies on the eve of the witch’s death, saving the town falls to Norman, who may not be up for the job.

Of course, as always happens in films like this, Norman attempts to do what he’s been asked, but fails through no fault of his own. This causes the zombies of the seven town elders who sentenced the witch to death to rise as zombies, causing no end to the panic in the town. Norman is aided by his reluctant sister, fellow outcast Neil (Tucker Albrizzi), Neil’s older brother Mitch (Casey Affleck), and the local bully Alvin (Christopher Mintz-Plasse) in stopping the zombie invaders and putting the curse to bed. And of course the curse is much more complicated than we are first led to believe, and in discovering how to end it, Norman will be forced to demonstrate courage, fortitude, and a great deal of empathy and introspection.

There’s a lot of ground to cover with ParaNorman in terms of fitting it into the pantheon of films made specifically for a younger audience. First, and importantly, ParaNorman is far scarier in places than most films like this. “Scary” kid film is a difficult line to walk, because it’s easy to be so scary that kids can’t watch it and even easier to not be scary at all and lose the audience. ParaNorman leans toward the first, particularly at the end when Norman confronts the witch (Jodelle Ferland). Even before that, there’s some pretty disturbing stuff and some seriously disturbing implications when we learn about who the witch really was and what happened to her.

Second, while there are certainly some homages to many earlier horror films, it is the mob mentality of Frankenstein that is the most frightening and the most realistic. That it’s frustrating for the characters and the viewers only makes these scenes more powerful.

What I like the best, though, is something that I can’t talk about in detail. One of the characters mentioned above reveals something at the end of the film that, in virtually any other film, aimed at children or at adults, would be a central theme of the film. Here, it’s a throwaway line that isn’t a commentary on the character or on anyone else. It’s left as something that’s just there and isn’t at all important or defining of the character we’ve spent time with. It’s brilliant, particularly in a film that is at least in part about tolerance.

More than anything, more than the parts that are scary, more than the overall attitude of the film, I was surprised at how dark this gets in places. There’s more than just scary stuff here—there are some deep and intense issues for the viewers to handle throughout the film. There’s significant bullying, borderline child abuse, and of course the execution of someone who was, after all, innocent. When the witch’s identity is revealed, the actions become all the more dark and shocking. It’s a lot for kids to process, and the ending, at least the ending of the main plot, is something far more satisfying and real than the traditional “everyone lives happily” ending that we might expect.

These factors may also be what doomed ParaNorman to be a one-off film. I’m certain it’s more than made back its money thanks to DVD sales and rentals by now, but it didn’t make back its budget at the box office. That’s sad, because there are a number of things here that are genuinely worth exploring in future films.

I see I’ve gotten this far without mentioning the animation itself. That’s an oversight on my part, because the animation is beautiful. This is stop-motion work, but it’s about the best I’ve seen. It’s on a par with the best work from Aardman, and that’s saying a lot. I didn’t realize it was a stop-motion/Claymation film until the end, after the credits. It looks like a computer-generated version of a stop-motion film. It’s impressive as hell, and it’s as good a reason as any to see this. Just make sure that any kids in the room can really handle some good scares.

Why to watch ParaNorman: Genuinely kid-friendly and genuinely scary in places. It’s the best of both worlds.
Why not to watch: It’s surprisingly dark for a children’s movie.