This is the tenth in a series of twelve movies selected by Chip Lary at Tips from Chip. 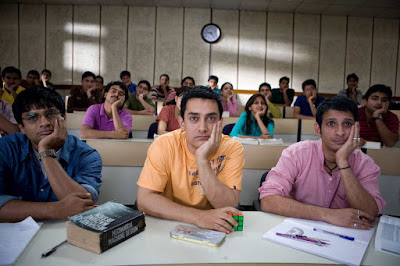 Twice this year, Chip Lary has given me tasks of epic length coupled with subtitles. The first was the Jean de Florette/Manon des Sources double-feature from a few months ago and 3 Idiots, today’s film. If I’m honest, in both cases, my lizard brain recoiled from these choices, this one more than the double-feature. It’s a big commitment. On the other hand, 3 Idiots was on my NetFlix queue for more than a year before Chip suggested it to me, so I can’t really complain too much that he finally made me watch it.

The bulk of 3 Idiots is told in flashback. Two former college friends, Farhan (R. Madhavan) and Raju (Sharman Joshi) are contacted by a third former classmate named Chatur Ramalingam (Omi Vaidya). Chatur tells them he has located their friend Rancho (Aamir Khan). Farhan, who is on a plane taking off, fakes a seizure to be returned to the ground. Raju is so excited that he runs out of the house without his pants. What they find is Chatur, their old nemesis, gloating about his success in the 10 years since college. Rancho is nowhere to be found, but Chatur claims he knows where he is. As it happens, Chatur and Rancho had a bet—to return in 10 years to see who had become more successful, and Rancho hasn’t shown up.

Chatur, Farhan, and Raju head off to where Chatur claims Rancho is in hiding. As they drive, Farhan thinks back to his time in college, and we get the story of these young men in engineering school, a reverie that essentially lasts until the closing 20 minutes of the film except for a critical moment in the middle of the film and another at the start of the third act.

Since 3 Idiots runs close to 3 hours long, a complete rundown of the plot is more than this blog is willing to bear. We’ll go quick and dirty. Farhan is becoming an engineer specifically because his father wants him to. His real passion is wildlife photography. Raju is in school because his parents hope that his getting an engineering job will alleviate the crushing poverty of his family. Farhan’s indifference to the material and the constant pressure on Raju put both of them at the bottom of the class.

Battling for the top position are Chatur and Rancho. Chatur is a classic grind, memorizing everything and working entirely by the book, exactly as is desired by the school’s director, Viru “Virus” Sahastrabudhhe (Boman Irani). Rancho is much more interested in the actual material, wanting to learn rather than simply be able to recite facts. The two different philosophies clash constantly. Rancho comes out on top, but Chatur has the backing of Virus.

Rancho’s character arc happens because of Pia (Kareena Kapoor), Virus’s daughter. After a meet-cute or two, the pair fall for each other (this is a Bollywood film, after all), but the pressures of school and life constantly come between them. Rancho also seems to be hiding a secret—we learn very little of his life until that return to the present at the end of the first act, and from that we get only more questions. Rancho, it turns out, isn’t really Rancho.

I’m not going to spoil the film at all. It takes a dark turn in the second act, although it’s one where we can surmise something like the outcome. A great deal of the film’s throughline concerns the suicide epidemic of Indian students. There is, evidently, a real problem in Indian colleges where the constant pressure and intensity cause students to simply blow out emotionally and kill themselves. Three specific suicides are either shown or discussed during the course of the film, a fairly heavy topic for what is otherwise a pretty lighthearted and entertaining romp, a sort of toned-down Animal House meets Real Genius with romance frosting.

There are some great comic moments here as well. The wedding crash scene, Chatur’s memorized Hindi speech, Rancho’s confession of love to the wrong sister...there’s enough comedy here in enough places that despite the heaviness of suicides, family tragedies and other strife, 3 Idiots is far more funny than it is anything else.

This is not my first run-in with Aamir Khan. It’s been probably a decade since I’ve seen Lagaan, but I recognized him immediately. It’s surprising that he was 36 in this, since he doesn’t look it at all. In fact, the principle cast has that rare quality of looking age-appropriate in both the present scenes and the 10-year previous flashback bulk of the film. Khan is immediately likeable on screen, as is Kareena Kapoor. Actually, that’s true of the four main sympathetic characters. Both Virus and Chatur are immediately unlikeable, and that’s precisely what they are supposed to be.

If there’s a fault here, 3 Idiots runs a little too long. The version I found clocks in at 2:51, which is probably 20 minutes more than is needed. Surprisingly, I’d suggest cuts in places other than the musical numbers. They aren’t really a part of the narrative specifically, but they break up the film beautifully, and I get that it’s all a part of the style. No, there are a few spots where 3 Idiots could use a trim, but even here, I’m not terribly adamant that it needs it. Actually, the only real fault is that we get two pieces of critical information in the first return to the present. Those two pieces of information give away the main thrust of the ending, which is a little sad. That said, getting to that ending is still worth the trip even if the destination is known 90 minutes early.

Chip was not the first person to suggest I watch 3 Idiots; he’s merely the most recent. But it also took me being essentially commanded to watch it to get me to sit down with it. Chip and everyone else who told me to watch this were right; it’s a joy and worth the three hours, one for each idiot. Chip, you’re 9.5 for 10.

Why to watch 3 Idiots: A great entrance into the world of Bollywood.
Why not to watch: The ending is too telegraphed.