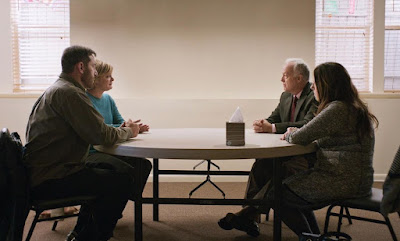 I’m not going to talk a great deal about Mass in the first two paragraphs of this. I’ll talk only in generalities. The reason is that the link to the full review comes after the first two paragraphs, and Mass is a rare movie that needs to be seen with as little knowledge as possible. If you came here via direct link and haven’t seen this, I’d recommend backing out now. I’ll warn you enough to say that this is not a lighthearted or even a fun movie. It’s like being repeatedly punched in the stomach. But it is an incredibly important movie, and one that demands to be seen and taken seriously.

It's also the directorial debut of Fran Kranz, who will always be the stoned joker character from The Cabin in the Woods to me. It’s hard to reconcile the reality of this, a film of deadly seriousness, with that character, but here we are. It’s a reminder that everyone, or most everyone, has depths that can be plumbed.

Mass is a conversation between four people that takes place in the back room of an Episcopal church. We have two married couples who arrive independently. The first are the Perrys, Jay (Jason Isaacs) and Gail (Martha Plimpton). The second couple to arrive are Richard (Reed Birney) and Linda (Ann Dowd), whose last name is never given. The four sit down in a back room that has been carefully arranged for them, out of earshot of ongoing piano lessons and the eventual choir practice.

Pleasantries are exchanged for a bit, and, organically, we discover what this is about. About half a dozen years earlier, Hayden, the son of Richard and Linda, committed a mass shooting at a school. One of his victims was Evan, the son of Jay and Gail. And that’s what this conversation is going to be about and it’s what we’re suddenly strapped into. If you’ve come this far, you’ve seen the movie and know what happens in this conversation or you’ve read on anyway. That possibility being the case, I’m not going to talk about what happens in that conversation. Either you already know or you should discover it for yourself.

I do want to discuss my own minor connection to this horrible American legacy. In 2008, there was a mass shooting at Northern Illinois University on Valentine’s Day. The shooting took place about two miles from my house, and about a block and a half from the daycare my younger daughter was in at the time. It’s a bizarre and terrible day when you see your house on television from the perspective of news helicopters. Had it happened two years earlier, my office on campus would have overlooked the scene of the shooting; the English department secretaries did triage for the wounded, who came pouring into the English building from the tragedy one building over. The NIU shooting is often overlooked these days, since it was literally 10 years to the day before the much more bloody and terrible Parkland shooting.

I also have a friend with a terrible connection to a school shooting, and one that is perhaps much more relevant to the situation in Mass. Her children survived a school shooting a few years back. Waiting to discover if her children were safe, she ended up talking with another parent, also looking for news. As it happened, that other parent was the shooter’s mother; he had taken the weapon from his parents’ closet. My friend held the hair of the woman as she threw up upon discovering it was her son who was the shooter.

As you would expect, Mass is unrelenting. It is a brutal and terrible picture of what is too often the reality in this country—a reality that we have the ability to change but for the rampant greed and stupidity of many of our politicians and citizens. It is also, as would be expected, a sort of sermon on the idea of grief. Jay and Gail are still mourning the loss of their son and his senseless death. Richard and Linda mourn not only the loss of their own son, but all of the lives that he took as well. For them, there is not only grief but terrible guilt. What more could they have done? What could they have done differently? And how much responsibility do they bear for the deaths caused by their son?

Mass, perhaps because it was released in a mere four theaters nationwide, perhaps because of its subject matter, flew under the radar for many. It certainly flew under the radar of the Academy come Oscar time. I’ve said many times before that my Oscar wrap-ups are not a celebration of the award but a reckoning. The fact that this cast and this screenplay were routinely ignored is not merely wrong but an indictment of the process. Jason Isaacs at the very least, should have “Oscar nominee” next to his name because of this film, and I think the same might well be true of Ann Dowd and Martha Plimpton. Kranz should have gotten a nomination for his screenplay as well. I fully expect that within the next year this will be performed on stage—it would move naturally to that venue and would be successful there as well.

Look, no one is going to watch Mass because they want to be entertained. It is a film that demands attention, though, and for a terrible reason.

This film ought to be required viewing for anyone who believes the rights of firearms take precedence over the lives of our children.

Why to watch Mass: Few movies are as important in theme and story.
Why not to watch: It’s not a gut punch, but a series of gut punches, over and over.

Posted by SJHoneywell at 5:03 PM