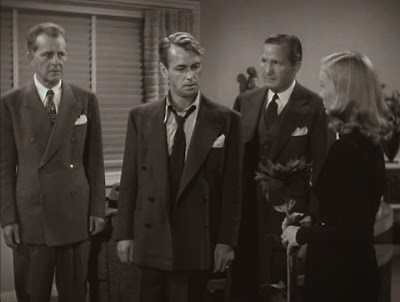 Like most people who appreciate films from the 1940s and 1950s, I’m a fan of the film noir style. The Blue Dahlia has the pedigree as the only original screenplay written by the great Raymond Chandler. What makes it interesting, at least from my perspective, is that it’s missing several of the elements of the classic noir, particularly in the femme fatale department. The real femme fatale here dies in the first reel, which makes what follows pretty unusual.

Johnny Morrison (Alan Ladd) is a Navy pilot put on leave along with two of his friends, George Copeland (Hugh Beaumont) and Buzz Wanchek (William Bendix). Buzz suffered a serious injury in the line of duty and has a metal plate in his head. Because of this, he gets frequent headaches, particularly from jazz music, and loses his temper quickly. Johnny goes home to his wife Helen (Doris Dowling) only to discover some ugly truths. Helen hasn’t been pining away waiting for Johnny’s return. Instead, she’s been living it up in a hotel with a group of rowdy friends and her new man, Eddie Harwood (Howard Da Silva).

Johnny kicks everyone out of Helen’s place and attempts to restore his marriage to its original, upright position. Helen’s not having it though. Their argument is interrupted by the hotel detective “Dad” Newell (Will Wright). Worse, Helen confesses that their young son didn’t die of diphtheria, but in a car accident she caused by driving drunk. Johnny threatens her with a gun, but he tosses it on a chair and walks out, telling her that she’s not worth killing. Helen calls Buzz, who tells her that he’ll do his best to get Johnny to come back. But Johnny doesn’t show up at Buzz’s and George’s place, so Buzz goes to Helen’s hotel where he meets her in the bar without knowing who she is.

Johnny winds up attempting to leave town, getting a ride from Joyce (Veronica Lake). This turns out to be a good thing, because the next morning, Helen is found murdered in her hotel room, and Johnny is the immediate suspect, naturally enough. It’s also a tremendous coincidence, because Joyce happens to be Joyce Harwood, the wife of Helen’s boyfriend Eddie.

The rest of the film is a weaving and unweaving of the various threads that we are presented in the first reel of the film. Johnny is on the run since he’s being pursued by the police. Joyce appears to be helping him, but in Johnny’s mind, she’s married to the most likely killer. This becomes cemented in Johnny’s mind when he discovers that Eddie Harwood is actually (no lie on this one, folks) Eddie Bauer, and wanted for murder in New Jersey—something Helen discovered and wrote down as an insurance policy on the back of a picture of her dead son. And what happened when Buzz went back to Helen’s room with her?

The Blue Dahlia, is engaging completely for the first two acts and into the third one. We run into some pretty tough characters who don’t have Johnny’s best interests at heart, and Buzz becomes more and more unhinged, dealing with his headaches and everyone’s evident love of jazz, since that seems to trigger his bad moods. The third act, though, suffers from a very hasty ending put together to appease the U.S. Navy, who didn’t want veterans depicted as homicidal maniacs, particularly that soon after World War II. In fact, the Navy went so far as to say that if the film went with Chandler’s original ending, the studio would never again receive any help whatsoever from that branch of the military. It makes the changes completely understandable, but these are changes that really don’t help the film at all.

I like Alan Ladd well enough, but he’s nothing particularly special here. He’s serviceable, more or less. Anyone would be able to handle this role just as well as he did. Seriously, switch him with Hugh Beaumont, and you have essentially the same movie, albeit with less star power at the top. It’s William Bendix who steals the show more than anyone else, and that’s entirely a function of the character he’s playing.

Sadly, Veronica Lake doesn’t seem to come across with the same charm and joie de vivre that made her so engaging in Sullivan’s Travels. She’s set up for us as a femme fatale, but she doesn’t have the right stage presence to pull off that sort of role, and it seems like she doesn’t even try. Plenty of other Golden Age actresses could have made a meal of the role. Lake simply picks at it and takes most of it home in a doggie bag.

With the ending Chandler wanted, this would be remembered as one of the better-written noirs of the decade. Sadly, the punked out ending makes it little more than a curiosity. That’s too bad, because it really could have been something special. I probably like it more than I should, but not nearly as much as I wanted to.

An interesting side note: Elizabeth Short was nicknamed "the Black Dahlia" by a bartender who got the name of this film wrong. Not long after its release, Short was murdered in one of the most grisly murders in Hollywood history. The Black Dahlia case, which got its name essentially from this film, is still unsolved.

Why to watch The Blue Dahlia: Raymond Chandler’s only story written directly for the screen.
Why not to watch: It punks the ending.