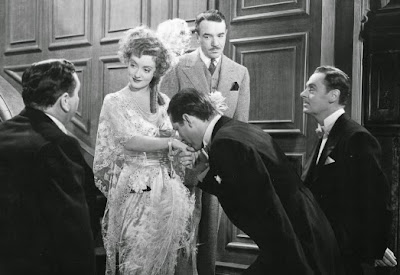 I’m always curious and a little excited when I locate a piece of Bette Davis’s filmography that I haven’t seen. Sometimes you get Now, Voyager or Jezebel. Then again, sometimes you get Mr. Skeffington. I chose those two films to mention here in comparison with Mr. Skeffington with reason. I bring up the brilliant Now, Voyager because, like today’s film, it co-stars the great Claude Rains. I referred to Jezebel because the character played by Bette Davis in that has a lot of resonance with the character she plays here. The problem is that both of those films are vastly better than this one.

Fanny Trellis (Davis) is the socialite to end all socialites. As the film starts, she is hosting a dinner party to which a group of suitors individually show up early in the hopes of some alone time with her. The only person she’s really interested in seeing is her cousin George (Walter Abel). The person she is not expecting is Job Skeffington (Claude Rains), who happens to be the boss of her brother, Trippy (yes, he goes by Trippy, and is played by Richard Waring). It seems that Trippy has not only burned through the Trellis family fortune in a matter of a couple of years, he’s also managed to embezzle some $24,000 from Skeffington, which is a large chunk of change, especially a hundred years ago, when this takes place.

Eventually, Fanny marries Job Skeffington in large part to prevent Trippy from going to jail. It doesn’t hurt that Job is rich as hell, and it turns Trippy’s embezzling into a retroactive bad loan to a family member. Marriage for Fanny is a minor inconvenience for her lifestyle. In fact, she manages to still spend a good deal of time with her various former suitors and also gets a bunch of new ones, all demanding that she divorce her husband and marry her. Job deals with this with the patience of, well, Job, and is eventually satisfied enough that his wife gives birth to their one and only child, also named Fanny. Trippy, disgusted by all of this, goes off to fight in World War I in the Lafayette Escadrille. Fanny the elder keeps up her social life, ignores her daughter and husband, and spends as much time with other men as she can.

Eventually, she catches her husband out with his secretary and divorces him, completely unfazed by the obvious hypocrisy of finding no fault in her own infidelity but being offended terribly by his. Once the divorce goes through, Job heads to Europe despite the growing climate of hatred for Jews and takes young Fanny (played at this point by Sylvia Arslan) with him. Fanny manages to keep up her youthful appearance and social calendar until she comes down with diphtheria, which nearly kills her and ravages her face. And thus reality comes crashing down, and as the film winds to a close, Fanny Skeffington is given a chance to be noble and redeem herself in the eyes of the audience and the world.

Right off the bat here, the biggest issue is the character of Fanny Skeffington. I don’t know if anyone could have pulled off this role as well as Davis—she’s the New York equivalent of Scarlett O’Hara—but she is a truly awful human being. She’s selfish, vain, and completely vapid, and gets away with it for the bulk of the film because of her beauty (and, for a part of the time because of her wealth). Admittedly, we’re not supposed to like her. We’re supposed to be somewhat disgusted by her, and we are. But the redemption at the end feels entirely forced and completely dishonest. It’s supposed to tug at our heartstrings and instead it just claws at the gut for being completely unearned.

I’m also mildly puzzled by the Oscar nomination for Claude Rains here. Don’t get wrong; I like Claude Rains as much or more than I like most actors in general, but here he’s only serviceable. Now, serviceably Claude Rains is better than you’re going to get from 90% of Hollywood, but aside from a scene or two, there’s nothing that magnificent about his performance. It pains me to say this about Bette Davis, too, but here she’s merely good, and not the Bette Davis of her truly great films.

Sadly, Rains and Davis are the main reason to spend any time with Mr. Skeffington. Oh, Walter Abel is certainly good in his role as Fanny’s conscience and the younger Fanny (played as an adult by Marjorie Riordan) has a nice moment where she dresses her mother down toward the end, but the story isn’t worth your time, especially when it requires much more than two hours to get to the tacked-on redemptive end.

Davis had a lot of great performances, and she is always worth watching. It’s just that there are a lot of times where she’s more worth watching than others, and Mr. Skeffington comes in pretty low in the ranks in terms of what she does with the role and what the role has to offer.

Why to watch Mr. Skeffington: Because Bette Davis and Claude Rains are worth watching.
Why not to watch: You spend more than two hours with a vapid socialite.