Films: My Sister Eileen
Format: DVD from NetFlix on The New Portable. 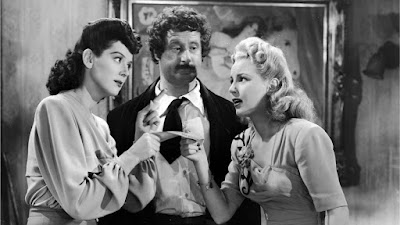 So my several months from hell are finally coming to a close, and it feels like I might actually come close to finishing my Oscar lists by the end of this year. At this point, virtually everything I watch is the last thing I need to see for a given year. That’s the case with My Sister Eileen, a film that wasn’t always available on NetFlix and then was. It’s apparently playing on TCM this month, too. If I’d known, I probably would have requested something else.

This is a film that has a great deal in common with His Girl Friday. What I mean by that is that it stars Rosalind Russell and that she is (at least initially) a newspaper reporter. When the film starts, Ruth Sherwood (Russell) is finishing up the last bit on a drama review for the newspaper in Columbus, OH. As it happens, she hasn’t seen the play yet, but she gives a glowing review to the star, her kid sister Eileen (Janet Blair). The review talking about the new acting sensation Eileen Sherwood goes out that night. It’s too bad that Eileen gets bumped from the role. Due to the embarrassment, Ruth is fired and Eileen feels she can’t show her face in town. With nothing else to do, the sisters decide to try their luck in New York. They’re sent on their way by their grandmother (Elizabeth Patterson) and given $100 by their father (Grant Mitchell).

So here’s what you really need to know, and since this is a screwball comedy, it’s literally all you need to know. Ruth wants to write; Eileen wants to act. There’s going to be wacky hijinks a-plenty until the last ten minutes or so of the film and everything is going to turn out just fine. Eileen will clearly have a future in the theater and Ruth will be championed as a new writing sensation. I’d have warned you with a spoiler alert, but again, this is a screwball comedy. The minute you know that, you know that everything is going to turn out fine.

There are a couple of stories going on here, of course. Ruth’s story is that she tries to break in at a magazine and ends up impressing the editor, Bob Baker (Brian Aherne), but not the publisher (Clyde Fillmore). Eventually, Bob quits/is fired over Ruth’s stories, which is a plot we’ll have to resolve. What Bob really wants from Ruth is for her to write about her crazy life, centered on her sister.

Eileen, we’re led to believe, is irresistible to men. And this is where My Sister Eileen fails for a modern audience. Every guy who sees Eileen, with the exceptions of Bob Baker and “Wreck” Loomis (Gordon Jones), a married neighbor, immediately forces himself on Eileen. I don’t mean that he tries to date her. I mean that he physically attacks her. This includes a press agent who sends Ruth out on a wild goose chase story so he can literally assault Eileen in the apartment, the landlord, and six sailors from the Portuguese Merchant Marine. “Wreck” being married keeps him in the clear. As for Bob Baker, the roles are reversed and in their one scene together, Eileen all but takes his pants off. By the end of the film, she’s making a play for Bob’s publisher, who is at least three times her age.

So here’s the thing: My Sister Eileen has some very good moments, and Roz Russell is the absolute champ of this sort of film. She has the pained facial expressions, the deadpan reactions, and the comic timing to make anything like this work. And in 1942, there probably was a market for this sort of thing. Drunken middle-aged men leering in through the apartment windows of two young women might well have been the height of comedy. But now? This just comes off as painful and gross.

It’s a good reminder that comedy doesn’t always translate. I had hopes for this, but it paints everyone as awful. Only Roz comes out with anything like her dignity intact. Oh, I supposed Bob Baker does as well, but that’s it. Everyone else is either a cartoon wolf when Eileen is around or, when Eileen spots a man she thinks can help her, a gold digger.

Even the ending cameo from the Three Stooges and the uncredited appearance by Arnold Stang at the start can't stop this from feeling pretty skeevy by today’s standards.

Why to watch My Sister Eileen: Roz Russell is always worth a watch.
Why not to watch: The sexual politics have aged about as well as the average banana.