Films: The Grudge (2004)
Format: DVD from Cortland Public Library on The New Portable. 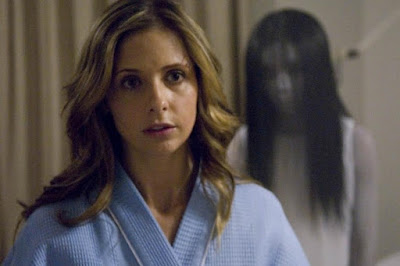 There’s no shame in having these holes in the viewing history. There are so many movies out there that no one can see them all, and there are always new people becoming movie fans who suddenly have worlds to discover. I no longer shame people on the movies they haven’t seen. That said, though, I am going to say something that will piss some people off. The “Blindspot” lists are something that are pretty popular on many film blogs. I think that’s cool, but you all need to start crediting the right person for coming up with the idea. The first person that I know who did Blindspot lists—and did multiple versions of them that were dozens of movies long—was Nick Jobe.

The American remake of The Grudge, produced by Sam Raimi, has an interesting pedigree. There are plenty of movies where an American production company picks up a well-received Japanese horror movie and remakes it for an American audience that refuses to read subtitles. Every now and then, you get a remake like The Ring that turns out decently. Most of the time, you get something watered down and stupid. The Grudge, thankfully, is more in the first vein. There are a few important reasons for that.

Another smart move is keeping the film in Japan. We’re going to have a series of American actors who are playing expatriate characters of one stripe or another, but we’re clearly in Japan. This is important, because The Grudge deals with a sort of ghost called an onryo, which is very specifically a cultural meme in Japan, a ghost that can cause actual harm in the living world.

The Grudge takes a page from Shirley Jackson’s “The Haunting of Hill House,” which purports that it’s possible for a house to be “born bad.” The house in question in The Grudge isn’t so much born that way, but made that way. The conceit here is that people who die either while enraged or in the deepest sorrow can essentially leave a stain on the place, a sort of echo that relives itself over and over and taints whomever comes into contact with this place.

And that’s where we’re going to be for The Grudge. While most of the film takes place in something like the film’s present, we’re going to get a series of flashbacks that are in more or less reverse chronological order to show us the rest of the story. In the present, exchange student Karen (Sarah Michelle Gellar) is living in Tokyo with her boyfriend Doug (Jason Behr). She works as a sort of caregiver under the guidance of Alex (Ted Raimi). Karen is sent to visit a catatonic woman named Emma (Grace Zabriskie), since Emma’s normal caregiver Yoko (Yoko Maki) has gone missing. And from this point on, nothing will be the same for Karen, as there is clearly something in the house.

As the movie continues, the story tracks further and further back into the past, showing us Emma’s son (William Mapother) and his wife (Clea Duvall), and their terrible fate. We also get the previous owners, who are the three people who seem to be the what the entire curse is focused on. I’m not going to go into detail here, because it’s worth seeing how this unfolds. How it does includes a small role for Bill Pullman as an American professor in Japan.

There are some good scares in The Grudge. Some of those are jump scares, which really are the cheapest type of scare, but there are some others that work in much different ways. One of the better moments of the film is seeing Emma’s daughter Susan (KaDee Strickland) attacked at her place of business. Watching one of the ghosts manifest out of the shadows through a video camera feed is incredibly scary. Shortly after this, Susan returns to her apartment building, and as the elevator climbs, we see the young child ghost (Yuya Ozeki) show up on each floor as the elevator climbs. It’s a subtle thing, but it works so well to create the mood and a real sense of dread.

I didn’t expect a lot from The Grudge, but was pleasantly surprised. It does feel disjointed at times, like it wants to build something like a mythology here but can’t quite get the bat off its shoulder. Nonetheless, it’s pretty solid.

Why to watch The Grudge (2004): It does a lot of things right.
Why not to watch: Don’t fear subtitles.