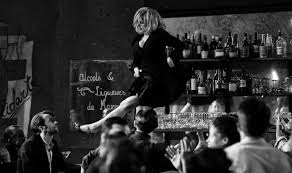 I went into Cold War (also called Zimna Wojna) completely cold. In fact, I had no plans to watch this today until I discovered it at my local library just waiting to be checked out. It’s great when the library grabs a film like this one, since it’s one that isn’t necessarily going to get a lot of play in a small town like mine, at least not before the students come back for the spring term at the local university. Anyway, knowing that I don’t have a great many more films to watch to complete the Oscars as much as I can (and that will change in a month), it seemed like a good idea to knock this one out, sneaking it in before the end of the year.

I don’t know what I expected with Cold War, but I definitely didn’t expect a movie about musicians in Poland under the Soviet regime. That, however, is what I got. More specifically, this is the story of a very tempestuous relationship between a composer and arranger named Wiktor (Tomasz Kot) and a singer named Zula (Joanna Kulig). This love affair will take them out of the Eastern Bloc, through multiple relationships, and back again under the shadow of communism.

To avoid the blow-by-blow of the couplings and uncouplings, betrayals and falling together of Wiktor and Zula, their marriages and affairs with other people, and the interference of Kaczmarek (Boris Szyc) who wants Zula for himself, suffice it to say that Wiktor defects, hoping to have Zula with him. She eventually marries to leave Poland and runs away to be with him, but it all falls through. Eventually, they both wind up back in Poland with her again marrying to rescue him from years of hard labor that come from his being accused of espionage because of his earlier defection. It’s a love affair where the pain and misery far outweighs those few moments of bliss. Part of that is the oppressive system and the world working against them, but part of it is their own actions.

Don’t get me wrong—I’m a sucker for star-crossed lovers dealing with the injustices of the world and pining for each other, hoping to capture just a moment or a day of happiness in a life of painful separation. But for me, that works best when that separation happens because of forces beyond the lovers’ control. That’s simply not the case with Cold War. A lot of the problems that Wiktor and Zula experience happen almost specifically because Zula is kind of an awful person. She’s the one who decides not to defect initially without telling Wiktor. She’s the one who has affairs outside of their relationship (beyond the one with Wiktor himself outside of her marriage). She’s the one who heads back to Poland when things aren’t exactly how she wants them. And she’s the one who ends up dealing with her pain and guilt by diving head-first into a bottle.

Because of this, as much as I want to be sympathetic to what is happening on the screen, it’s not that easy. Zula makes it hard for me to want these two to end up together. Wiktor, who seems to walk blindly into all of Zula’s insanity, doesn’t seem to be worth a lot more sympathy, because a lot of what happens to him happens because he doesn’t make any good choices, either. I understand that love will cause people to do some really stupid things, but that doesn’t mean I’m going to do more than shake my head at the people in question.

I don’t want to give the wrong impression here: Cold War is an interesting film, and I very much appreciate the fact that it tells the story quickly, cleanly, and without a lot of frills. The movie runs a tight 89 minutes, and that’s with a significant set of final credits. Cold War is streamlined to tell the story it wants to without any fat or unnecessary exposition or scenes. It’s taut in that respect, and in a world where superhero movies are regularly topping the two-hour mark and many stretch well into three (like Avengers: End Game), having a story be both this complete and this efficient is refreshing.

I don’t know how much I like Cold War more than I respect it and what director Pawel Pawlikowski did with it. I’m not sure I want to watch it again, but I do want to see some more of his movies, and that probably says it all.

Why to watch Cold War: The story is unique in many ways.
Why not to watch: It feels like the same sort of fatalism that came from the Eastern Bloc in the 1980s.