Films: Pieces of a Woman
Format: Streaming video from NetFlix on Fire! 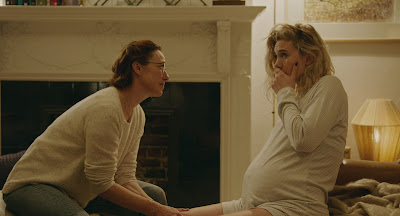 When I found out what Pieces of a Woman was about, I figured it was going to end up being one of the last movies I watched for the 2020 crop of Oscar nominations. There’s a great deal I will put up with when it comes to a movie, but I’ve never been a fan of a movie that features the deaths of children. This is not a spoiler, by the way. All of this happens before the title of the film drops, although admittedly that happens a good distance into the film.

That is, in fact, what this film is about. Martha (Vanessa Kirby) and partner Sean (Shia LeBeouf) are preparing for the arrival of their daughter. Everything seems to be fine, so when Martha starts into labor, both are prepared. The problem is that Martha’s midwife is in the middle of a difficult labor and sends a backup, Eva (Molly Parker). There are complications in the delivery, and Sean is instructed to call for an ambulance. The baby is born and everything seems fine, but the baby goes into cardiac arrest and dies.

The rest of the film is, essentially, the fallout from this event. What we’re going to see is Martha attempting to put her life back together, Sean attempting to deal with what has happened and reconciling it with his past, and the unwanted input of Martha’s mother Elizabeth (Ellen Burstyn), who plays an important role in everything that happens between Martha and Sean. And while Sean’s personal demons are a large part of the second act of the film and Elizabeth’s meddling in how Martha approaches her life after this event, it is really a film about how Martha attempts to come to terms with what has happened and to how she starts to put her life back together in some semblance of a new normal, as terrible as it may be.

One of the major conflicts that happens here is the power struggle between Elizabeth and Sean. There is no love lost there, and much of Elizabeth’s motivation throughout the film is an attempt to demonstrate that Sean is inferior in many ways. This is in part because he does not have the wealth Elizabeth does (she buys the couple a minivan at the start of the film) and in part because he is a blue-collar worker. Some of it, thought, is because Sean is a former addict, although as the film starts, he is more than six years clean.

A good percentage of the film is spent on the disintegrating relationship between Martha and Sean. There are several moments where, in isolation, Sean does not come off well, and a moment or two that are generally inexcusable. But there are moments that demonstrate the depth of his pain and his anguish. It’s easy to write off Sean in the same way that Elizabeth does, but there are also moments where he is clearly attempting to salvage the relationship with Martha, and where Martha is the one who is failing the relationship.

But this is Martha’s story more than anyone else’s and because of this, we’re going to spend the bulk of our time with Vanessa Kirby. What she goes through is a long, emotional journey. She seems almost detached from everything, but also frequently seems like her detachment is a defense mechanism, because letting in the reality of what happened would simply be too much for her. There is a great deal of pain, but also a search for things to make sense. Her dealing with the death of her infant comes to a head when Eva, the midwife, is put on trial for a number of counts including involuntary manslaughter.

There’s a lot that is done right here. Pieces of a Woman was nominated for a single Oscar—Vanessa Kirby—but it may well have been given short shrift in a couple of other places. Shia LeBeouf is surprisingly good in this, albeit not really Oscar-worthy. He often is pretty good; I shouldn’t be shocked when he is, but I generally am. Ellen Burstyn steals a few scenes, though, and I am genuinely surprised at her lack of a nomination in a supporting role. I think it’s clear that the Academy doesn’t like Shia, but Ellen is an Academy darling.

Are there negatives here? Sure. Jokingly, one negative is that Shia LeBeouf does something very close to full-frontal in one scene. If you’ve ever wanted to see the tip of Shia’s tonker wiggling under his shirt, I have some great news for you: it’s in this film. Beyond that, and much more seriously, this is not a film to take lightly. Not a lot happens here that is good for anyone; not until the final few minutes, at least.

This isn’t one I’m likely to watch again. It’s not a bad movie; I just really hate dealing with movies that involve the death of a child.

Why to watch Pieces of a Woman: It’s important in a real way.
Why not to watch: Shia LeBeouf goes full frontal.