Films: Censor
Format: Streaming video from Hulu Plus on Fire! 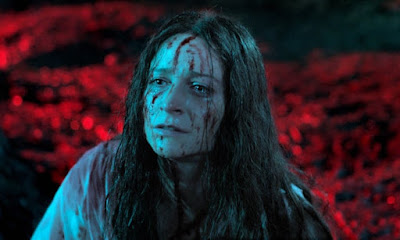 I got a lot of suggestions of 2021 movies to watch since I am constantly 18 months or so behind on new stuff. I figured that now, pre-Oscar nominations, I would get through some of them just for fun. A movie like Censor isn’t going to raise a lot of eyebrows or get a lot of votes come Oscar time, but it looked interesting, so I figured I’d give it a shot. While I won’t be watching 2021 movies exclusively, a couple a week seems like a pretty good goal.

Censor is a horror movie about horror movies, kind of. Specifically, it concerns Enid (Niamh Algar), who works as a censor. To really understand this, you need to know about the Video Nasties. Essentially, during the 1980s, the UK had censor who would restrict or ban movies that were particularly nasty or violent. Enid is one of the censors. She spends her days watching the worst and most horrifying of mid-80s movies, suggesting cuts or simply deciding that something needs to be banned.

We also find out that years before, Enid had a sister named Nina. Something, we’re never really told exactly what, happened to Nina when they were very young, and Nina disappeared. Enid’s parents have decided to finally have Nina declared legally dead, but Enid resists this step. She is convinced that Nina was abducted and is still alive somewhere.

A few things happen essentially one on top of the other. First, there is a news story that a man has killed his family in a way that is reminiscent of a movie that was passed by the video nasty crew. Specifically, it is somehow leaked that Enid is one of the censors who watched and passed the film. Second, a producer named Doug Smart (Michael Smiley) shows up at the censorship office and tells Enid that a long-time horror director Frederick North (Adrian Schiller) has specifically requested that she screen one of his old films, Don’t Go in the Church. Enid discovers that the film has parallels to what she remembers from her sister’s disappearance.

Third, and arguably most important, Enid does some investigation into North and acquires a copy of one of his banned films. She discovers that the lead from that film, Alice Lee (Sophia La Porta) looks exactly (to her) like what her sister Nina would look like aged up. And so, naturally, Enid becomes something like obsessed with locating Alice Lee. This becomes even more imperative for her when she is told that the upcoming sequel to Don’t Go in the Church will be Alice Lee’s last film. Enid becomes convinced that the reason for this is that Alice will be killed, perhaps even on screen.

I’m going to stop here in terms of the plot rundown, because the third act is going to go places that are kind of expected, but it’s going to go a lot further and get there in ways that are not expected. There are going to be shades of films like 8MM and Thesis here, but I was also reminded in part of Saint Maud at the end. If you’ve seen Saint Maud, that’s going to mean something, but you’re going to be wrong.

Censor is a difficult film to watch in parts. It’s going to start with some clips from classic horror movies of the day, and we’re going to end in a place where reality isn’t quite accessible and is essentially what we decide to make it, or perhaps what Enid has decided to make of it. The last 10 minutes or so require a great deal of attention to understand exactly what is happening…and what isn’t happening.

Censor seems like a lot of what modern horror is becoming. A great deal of modern horror seems to be more and more about seeing how we can move away from reality, both in terms of what the characters experience and what the audience sees. A big part of the horror is not merely what we see on the screen, but trying to determine exactly what is really happening is a big part of the horror. We lose touch with reality because the characters have lost touch with reality as well, and we don’t just have an unreliable narrator, but an unreliable everything.

There are some ideas I liked in Censor, but the very hard left turn down a wormhole comes out of nowhere. Sometimes that works really well. In this case, I found it jarring and a bit disappointing after an interesting first couple of acts. Censor is good enough, but not enough to be anything more than just good.

Why to watch Censor: This is what modern horror looks like.
Why not to watch: The third act doesn’t make a great deal of sense if not ready for it.