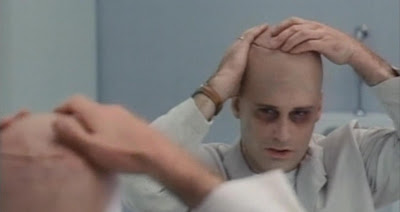 It’s a minor tragedy that David Keith and Keith David have not done a film together, at least to my knowledge. However, there is a single film that includes the talents of the frequently mistaken for each other Bill Pullman and Bill Paxton. That movie is 1990’s Brain Dead. This movie is a bit of a bait-and-switch. Anywhere you look for this movie, you’ll find pictures of a weird face stretched across a screen (see the picture below). And that face appears in the first couple of minutes of the film and never comes back. It’s on the damn cover art, and it’s not anything that actually matters to the film.

Anyway, the face thing is actually being used to test what parts of the face react when a disembodied brain is prodded with an electrode. This is being done under the supervision of Dr. Rex Martin (Bill Pullman), a brain researcher who is researching physical causes of mental illness. Rex has a strange attachment to all of the brains in glass jars on the shelves in his office.

We’re soon introduced to Jim Reston (Bill Paxton), Rex’s friend from high school, who is now a successful executive at Eunice, a massive “fingers in every pie” corporation. His hope is that Dr. Martin can help him with the case of John Halsey (Bud Cort), a mathematician who has slipped into paranoid delusions right at the point of a great breakthrough. Eunice, who it turns out also funds Rex’s research, would like him to operate on Halsey and either get him to recall the numbers from a missing formula or have all of his knowledge essentially burned out of his brain. Shortly after this meeting, Dr. Martin is in an accident where he is hit by a car and his head smashes the windshield.

And from this point forward, we are in the land of an unreliable narrator. What happens is not something I am going to attempt to describe in any detail. Suffice it to say that we have a series of what appear to be dreams and shifting reality. Martin is convinced that he has killed his wife and Jim after being told that Halsey killed his wife and children. Or perhaps Martin is actually Halsey himself. Is Jim having an affair with his wife? Did he murder them both with an ice pick? Is he actually a mathematician?

The entire point of Brain Dead is that we as the audience generally have no idea of what is going on at any time. Once the car accident happens, anything and everything could be reality, hallucination, memory, fantasy, or pure delusion. And, in fact, in most scenes, any of these possibilities could be what is happening, and what is happening could shift from moment to moment. We are very soon in a world were we have nothing we can fully understand and no one who is reliable enough to tell us what is going on in a way that can be believed. Everyone is unreliable, most especially Rex himself. Brain Dead is kind of fascinating in spite of itself. It purposefully sets out to make a film that is largely incoherent, or at least largely not attempting to make a great deal of sense. Everything that happens is suspect, and so for a good deal of the film’s running time, we have no legitimate way to honestly tell what is going on. We do have a narrative and it’s a narrative that works, after a fashion.

Brain Dead is not a great movie by any stretch, but it is an interesting one and perhaps a clever one. “Better lucky than good” is a phrase that pops up every now and again. In this case, the truth is more “better crazy than crafty.” The reason Brain Dead is worth watching is the very reason that a lot of people will hate it—it’s hard to make sense of, hard to follow, and that’s exactly the intended reaction.

But is it good? I’m not sure. It’s kind of fascinating in a way. There’s a lot going on in the plot in one way or another to make the whole thing work, and in that sense, it is a carefully constructed Rube Goldberg machine that gets us to where it wants us to go. I’d like the ending tied off with a better bow or ribbon. A lot of working this in terms of keeping the plot just on the “okay” side of reality.

Why to watch Brain Dead: It goes where other movies only threaten to go.
Why not to watch: The stretched out face thing has nothing to do with the plot.
Posted by SJHoneywell at 11:42 PM