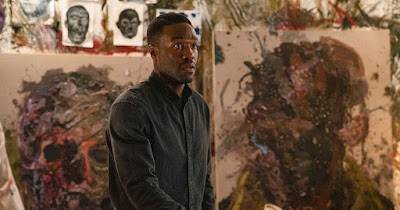 There’s a moment in Candyman, the spiritual sequel of the classic horror movie, where our main character walks through a library to do some research. This is not specifically worth mentioning except for the fact that that is not a library in Chicago but in DeKalb, IL. It is, in fact, Founders Memorial Library at Northern Illinois University. I know this because I worked at that library as an undergraduate. This has nothing to do with a review of Candyman; I just think it’s cool. DeKalb County, IL doesn’t have a lot of connections to movies, so when one shows up, I feel like it’s worth commenting on.

I wasn’t sure what to think about Candyman. I thought going in that it was going to be a remake of the classic, but it’s not; it’s very much a sequel that builds a great deal on the original movie in terms of how the legend builds and works. Much like Halloween from 2018 pretends that the sequels and remakes didn’t exist, Candyman pretends the sequels don’t exist. Instead, we’re just multiple decades in the future where our original Candyman seems to have been forgotten, destroyed along with the projects at Cabrini-Green that were so central to the feel and racial injustice of the original.

The big change, or what appears to be the biggest change in connection to the original story, is that our Candyman in Cabrini is Sherman Fields (Michael Hargrove), possessed of a hook for a right and with a penchant for fur-lined coats, was beaten to death by police after being falsely accused of putting razor blades in candy, a crime for which he was posthumously cleared.

Decades into the future, Cabrini-Green has been leveled and the neighborhood gentrified. Living in the area is artist in a slump Anthony McCoy (Yahya Abdul-Mateen II), who lives with his girlfriend Brianna Cartwright (Teyonah Parris). Brianna works as the director of a gallery and is supporting Anthony at the moment while he is searching for inspiration. He gains that inspiration from Troy Cartwright (Nathan Stewart-Jarrett), Brianna’s brother when he and his partner Grady (Kyle Kaminsky) have dinner with the couple. Intrigued, Anthony does some investigation in the Cabrini neighborhood and, after being stung by a bee, meets Billy Burke (Colman Domingo), a Cabrini resident who confirms a great deal of the story of Helen Lyle (Virginia Madsen from the 1992 film) and introduces Anthony to the legend of the Candyman. The crux of the legend is saying “Candyman” in a mirror five times summons the spirit of Sherman Fields, who will then kill the summoner.

This becomes the theme of Anthony’s entry at a gallery show. It is initially panned by art critic Finley Stephens (Rebecca Spence) as being essentially more of the same—gentrification, violence, and racism. But, that night, Brianna’s partner Clive (Brian King) and his girlfriend Jerrica (Miriam Moss) are killed when Jerrica says “Candyman” in the mirror on Anthony’s piece five times. And thus the murders begin, baffling the police. We, as the audience, get the privilege of seeing the murders take place, and they are quite inventive. Why inventive? Because the summoners can see the Candyman but he essentially lives inside the mirror, but his actions take place in the real world.

You know where this is going, right? Anthony digs deeper and Candyman kills people foolish enough to summon him. Meanwhile, that bee sting that Anthony got starts to do some upsetting things to his body. We also discover that there are connections between Anthony’s story and the first film, with Helen Lyle, and more. And, more importantly, we learn that there is a much deeper connection between Anthony, Sherman Fields, and the original Candyman, Daniel Robitaille (Tony Todd in the original film, and for a moment or two in this one).

There’s a great deal to like with this revamped and updated version of Candyman. There is a very clear attempt to connect this not just to the original 1992 movie but to the idea of legend and legend building, and of the cyclical nature of abuse, death, social ills, generational violence, and more. Much of the legend is told with gorgeous and detailed shadow puppets a la The Adventures of Prince Achmed, and these moments are truly beautiful.

The problem is that Candyman wants to absolutely cement the connection between this film, the previous film, and the entire legend that is being built. For as good as a great deal of this film is, this is very clumsy and doesn’t work as well as it should.

Still, this is a solid attempt at making the Candyman idea and character relevant to a new audience, and it is a story that should be relevant. Many of the ideas of race and racism of gentrification and of generational trauma not only still exist but have become prevalent and much more exposed in the last few years. It’s worth seeing for this regardless of how disappointing the third act is. The original is still better, but this is a solid follow-up.

And, y’know, there’s a cool library in it.

Why to watch Candyman (2021): This is a movie with something to say.
Why not to watch: It doesn’t live up to the original.