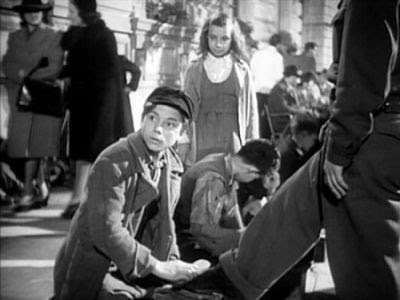 I said recently that there seems to be a reason that I have avoided certain films in the Oscar list for this long. I haven’t always known why, but for the last couple of months, the films have been ones that I haven’t enjoyed a great deal for one reason or another. In the case of Shoeshine (or Sciuscia, if you prefer the Italian), the reason was clear. Vittorio De Sica doesn’t make happy films, and I have to be in a particular mood to want to see a solidly depressing drama. Couple this with the fact that foreign films require a focus and concentration I’m not always capable of providing, and there’s a reason that it’s taken me half a decade to get here.

Two boys, Giuseppe (Rinaldo Smordoni) and Pasquale (Franco Interlenghi) shine shoes to make money and are otherwise saving up to buy themselves a horse. They’re close to having enough, and every day they do what they can to get a little closer to their goal. Their goal finally falls into their lap when Giuseppe’s brother Attilio (completely uncredited) asks the two to perform a small task. They are to take a couple of American blankets to a fortune teller and sell them to her. This will net them a cool 500 lira, edging them closer.

The two go and get the fortune teller to buy the blankets, but her house is soon raided by the “police.” In truth, the raid is conducted by Attilio and his friends, who take the opportunity to rob the woman blind. Wanting to keep the two boys quiet, he tells them to keep the money from the blankets and gives them additional cash. And so they go and buy their horse, and everything is right with the world for a few short hours.

Of course it’s not going ot stay like that. After all, this is a Vittorio De Sica film, and he doesn’t do much in the way of happy. No, the two boys are going to be accused of the theft and are going to be sent to prison to confess. Giuseppe holds firm, but the prison officials trick Pasquale, making him think that Giuseppe is being beaten senseless and forcing him to confess. This confession sets the two boys against each other, a theme that the film follows to its natural and terrible conclusion.

I don’t want to sound like a total downer here, but Shoeshine really is a total downer. I understand that this probably was what the post-war years looked like in Italy, with millions of people on the street looking for anything to stave off hunger and death for one more day. I get it and I understand that this is an important and even a great movie. But do I need to see that on my screen every moment? Like I said, I get it, but enough is enough.

And so I find it kind of hard to judge Shoeshine. It is a genuinely great movie in pretty much every objective aspect you can think of. It’s beautifully shot and has a clear and serious purpose. In fact, it has everything there to make it a classic of its era, country of origin, and style.

So what’s wrong? Nothing, except for the fact that it is monumentally depressing. Things aren’t merely bad in Shoeshine, they are consistently bad and they consistently get worse as the film goes on. People get in trouble and compound that trouble as they attempt to dig their way out from under it. De Sica’s work is ever thus. It is technically excellent and depressing as all hell.

Shoeshine is no exception to these parameters. It’s a good movie—even a great one. It is perhaps De Sica’s most important film and certainly the one that gave him a great deal of impetus in his career and is his first important film. And I don’t think I want to watch it again.

Why to watch Shoeshine: If you don’t know Italian neorealism, do you know film?
Why not to watch: Good things don’t happen in De sica films.