Films: The ‘Burbs
Format: DVD from Cortland Public Library on The New Portable. 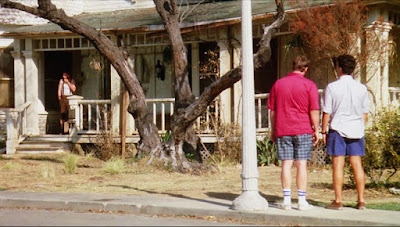 There’s a certain mindset needed to pull off horror-comedy well. This is something I have railed about in the past. Most filmmakers, when faced with the challenge of a film that combines elements of both comedy and horror will side much more on the comedy side instead of the horror side. Even the ones that are well done--Shaun of the Dead, Slither, Dead Alive and a host of others are far more likely to lean harder on the comedy than the horror. What horror we get will often be of the gross-out variety because, well, it’s easy to blend that with comedy. In the case of The ‘Burbs, we’re not getting a great deal of horror and, honestly, not a great deal of comedy.

What I mean by that in this case is not that this is a Scary Movie-style spoof, but that it is very much a movie comedy before it is anything like the thriller it is pretending to be. Specifically, that means that The ‘Burbs is going to be filled with the sorts of characters that exist only in comedy movies. I might even go so far as to say that the characters here are specific to comedy films of the 1980s.

This isn’t a plot that requires a great deal of thought. Ray Peterson (Tom Hanks) lives in a cul-de-sac of pretty standard suburban homes where he is plagued by his crazy neighbors. His newest neighbors, the Klopeks, are his biggest worry. See, the Klopeks are reclusive and evidently foreign, and so everyone distrusts them. This distrust starts off as relatively mild, just another annoyance on the cul-de-sac, like dogs pooping on other people’s lawns and the like.

Ray’s crazy neighbors include Mark Rumsfield (Bruce Dern), a Vietnam vet who is still a little too close to the war and Art Weingartner (Rick Ducommun), who appears to be more or less an idiot. Mark is feuding with Walter Seznick (Gale Gordon), since Walter’s dog poops on his lawn all the time. Observing this from his front porch is Ricky Butler (Corey Feldman), who seems to be more or less amused by the antics of all of the adults. As the film begins, Ray is taking a week off work, with no real plans except to lie around the house. Art’s wife is away, which leads him to start pestering Ray about the Klopeks, since none of them know anything about them.

What’s going to follow for most of the rest of the film is that Art and Mark are going to act in extreme ways because they are movie characters. Ray is going to alternately think they are idiots and agree with them and their insane plans. All of these plans are designed to figure out exactly what is going on inside the Klopek house, especially because circumstantial evidence makes it look like the Klopeks (played by Courtney Gains, Henry Gibson, and Brother Theodore) are serial killing psychopaths.

The truth is that I don’t actually have a great deal to say about The ‘Burbs because there isn’t a great deal to say about it. It’s honestly “funny” in the way that not very smart comedies from this era are “funny.” If you enjoy watching dumb people do dumb things and then pay for the consequences of their stupidity through something painful happening to them, well, this movie was made for you.

In fact, I feel a little odd calling this a horror movie because it isn’t. IMDb lists it as a thriller, and it’s not that, either. It’s a failed comedy and not much more. The best part of it is Carrie Fisher as Ray’s wife, and she’s out of the movie for a good percentage of it.

I’d say this is disappointing, but it’s not. There’s a weird little subgenre of horror-like films that take place in suburbia and play specifically with those sensibilities. Blue Velvet, Poltergeist and others are what make that genre click. The ‘Burbs wants to be in that group and, like the kid pushing on the pull door in that Far Side cartoon, isn’t nearly smart enough to make it in the door.

As a final note, I've just realized that this is the second Corey Feldman movie I've reviewed in as many Wednesdays. I'm thinking I should watch Bordello of Blood next week and complete the trifecta.

Why to watch The ‘Burbs: Carrie Fisher?
Why not to watch: It’s really dumb. No, really.