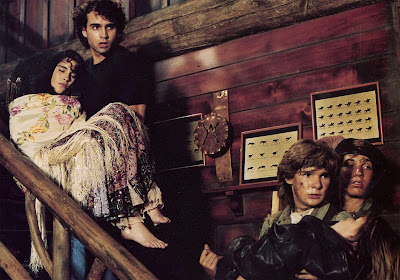 There are certain movies that define particular points in time. There are, for instance, movies that feel like they belong to specific decades. With that in mind, I present to you The Lost Boys, arguably the most 1980s film in the history of movies. If it’s not the most 1980s film ever, it almost certainly is the most ineffably 1980s horror film, and I say this as someone who loves both Fright Night and Night of the Comet. Seriously, what other horror movie has a shirtless saxophone player?

Recently-divorced Lucy Emerson (Dianne Wiest) moves herself and her two boys Michael (Jason Patric) and Sam (Corey Haim) to the California beach town of Santa Carla to move in with her father (Barnard Hughes). The boys are less than enamored with the move, while Lucy starts looking for work on the boardwalk. She picks up a job at a video store (See! Pure ‘80s!) run by Max (Ed Herrmann) while the boys try to figure out how to fit in. For Sam, this means hanging out at the local comic book store where he meets the Frog Brothers, Edgar (Corey Feldman) and Alan (Jamison Newlander). For Michael, it means pursuing Star (Jami Gertz), who he sees on the boardwalk.

Now, what happens here is supposed to be a surprise, but it’s really not. Star is kind of the bait for a gang of vampires led by David (Kiefer Sutherland). Star is a half-vampire, meaning that she has been sort of initiated into the group by drinking vampire blood, but has not yet killed anyone. Michael is her intended first kill, but she likes him, and so he is soon a half-vampire himself. Meanwhile, the Frog Brothers are filling up Sam’s head with ideas about vampires in the town, ideas that turn out to be surprisingly true.

What follows is essentially what you expect: a battle for Michael’s soul, which turns out to be a battle for Star’s soul as well. The vampire gang—the J.M. Barrie-esque Lost Boys of the title—do what they can to attract Michael into the group while Sam does what he can to keep Michael as human as possible. There’s a good amount of comedy here, much coming from the grandpa character and a good amount from the Frogs as well. And, of course, it as the 1980s ending you fully expect it to have, concluding with one of the great final lines in ‘80s film history.

I have a couple of things to say about The Lost Boys, one of which is something I’ve thought for a long time and one being something that just occurred to me. Years ago, I played a game with some coworkers. The idea was to come up with someone who had been in at least five films and had never been in a good one. Ed Wood, for instance, might jump to mind, but some of his movies are campily entertaining. While The Goonies and Stand By Me could redeem Corey Feldman, it takes The Lost Boys to keep Corey Haim from having a career filled with shame and ignominy (okay…Murphy’s Romance probably saves him, too).

The second thing here is that the Lost Boys was one half of one of those Hollywood coincidences where two films with almost identical plots are released very close in time to each other. In this case, The Lost Boys was released about six months before Near Dark, which follows essentially the same plot minus all of the humor. I don’t know why I never noticed that before.

I love The Lost Boys. I love everything about it. I love Kiefer Sutherland in vampire makeup. I love that one of the vampires is played by Alex Winter. I love 1980s adorable Dianne Wiest and how weird the grandpa character is. I love Corey Haim’s awful ‘80s wardrobe and Jason Patric’s ‘80s sunglasses and earring. I love how serious Corey Feldman is saying goofy vampire-related dialogue. There’s nothing about this movie that isn’t wildly entertaining and that doesn’t recall hours spent looking through new releases at the local video store.

I’m not ashamed of my love for this movie. It’s damn-near perfect, and while there are sequels that came out eventually, I’d have loved for this to be an actual franchise. It was good enough and it deserved it.

Why to watch The Lost Boys: There may not be a more ‘80s thing in existence.
Why not to watch: No good reason. Seriously, it’s pretty great.