Off Script: From Hell

Films: From Hell
Format: DVD from Cortland Public Library on The New Portable. 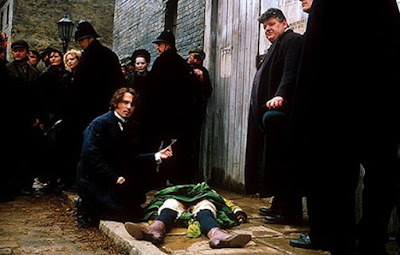 It seems like when it comes to movie adaptations, Alan Moore just can’t catch a break. Those films that got something like an endorsement from Moore turned out to be pretty uniformly terrible. The ones that he decided not to endorse (like V for Vendetta) generally turned out to be pretty credible versions of his stories. From Hell was the first feature-length adaptation of a Moore graphic novel, and I can imagine that Moore’s expectations were high. A Jack the Ripper movie starring 2001 Johnny Depp? Sign me up.

What makes From Hell different from what might be expected in a Jack the Ripper story is that this one is going to spend a surprising amount of time in the higher ranks of society. From Hell posits that the Ripper, while clearly ghoulish, was committing his crimes for a much higher purpose that involved the Royal Family. It’s a hell of an interesting conspiracy theory, and given the sort of space that it really needs to be explored (like in, say, a graphic novel), it’s one that could easily be made compelling.

Sadly, that’s not going to be the case with From Hell. What we’re going to have is a series of stories that are going to collide with a lot of murder happening. In one story, we have a group of prostitutes who are clearly going to be Jack’s victims. If you know your Jack the Ripper lore at all, you’ll recognize the names. The prostitute that we’re going to be concerned with the most is Mary Kelly (Heather Graham). Mary and her group are currently in trouble with a local gang, who are demanding exorbitant fees from the women to continue working. Naturally, since the Ripper is beginning his reign of terror, this puts them in danger by forcing them to work.

Also going on at the same time is the story of Ann Crook (Joanna Page), a former prostitute who has just had a child and has apparently gotten married to a well-to-do young man and had his child. The women see Ann kidnapped with no explanation, and around the same time, the Ripper attacks begin. Are these events connected? Of course they are.

Our third thread here will be concerning the investigation of the crimes. This will be headed by Police Inspector Frederick Abberline (Johnny Depp), who claims to solve crimes in part because of visions. Abberline is “troubled” in the sense that he has at least a few things in common with Sherlock Holmes. The big thing is that when he doesn’t have something to turn his mind to, he resorts to drugging himself. Holmes was a cocaine addict; Inspector Abberline likes heading to opium dens and chasing the dragon.

One of the problems with a film like From Hell is that there isn’t enough space or enough characters to give us a variety of choices in potential suspects. We’re very limited to the number of people who could legitimately be the Ripper here, so when the reveal actually happens, it’s not really that much of a shock. It’s a nice cast, at least. In addition to those already mentioned, the cast includes Ian Holm as a doctor and Robbie Coltrane as a police sergeant and Abberline’s able assistant.

The problems with From Hell are rife. The accents, for a start, are pretty inconsistent. The idea that Abberline’s M.O. is to use psychic visions rather than solid detective work is troubling as well. The characters of the prostitutes in particular are uniformly dumb. Time after time, one of them walks into the clutches of the Ripper without a single thought that their actions are likely to turn them into worm buffet.

And all of that could be dealt with. I could live with Depp’s face-first dive into an accent that he clearly hasn’t earned. The problem is that From Hell commits the one cardinal sin I can think of: it’s boring. This is a film about probably the most famous serial killer in history, and From Hell plays out as the story of a bunch of very unintelligent prostitutes touching tangentially on a very boring police procedural.

Why to watch From Hell: A different kind of Jack the Ripper story.
Why not to watch: It’s just not that good.