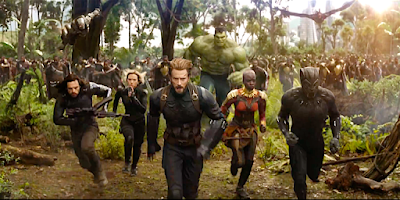 I have to say that I’m a little surprised at the inclusion of Avengers: Infinity War in the latest edition of the 1001 Movies. Up to this point, the only superhero movies that have made it in are a few Batman films and Black Panther, which I think only got in because they realized just how much the editors missed the MCU bandwagon. Truthfully, not all of the MCU movies deserve to be in the list, but some of them did. I’d cite Iron Man, the film that started the MCU and made it viable is one that belongs. At this point, including Infinity War feels like a bit of a sop, like they’re trying to claim a street cred they don’t have and haven’t earned.

From my standpoint, there’s far too much to go into for what I normally talk about with these posts. If you were to watch the entire MCU not in the order the films were made but in the order they happen, we’re talking about the 21st movie in the series. That means there are 20 movies worth of backstory that need to be understood, from Captain America: The First Avenger to Ant-Man and the Wasp to get through. Admittedly, since Ant-Man doesn’t appear in this film, you could probably skip those two, but otherwise, there’s a lot of history to catch up on to fully understand everything that happens here and all of the characters. There’s a shitload of characters here.

That being the case, I’m not going to attempt a blow-by-blow breakdown of the story. I’d be here writing all night and you’d be reading all day were I to even attempt to do that. Suffice it to say that Thanos (Josh Brolin), intergalactic badass and tyrant, has developed something he calls the Infinity Gauntlet. This device will allow him to house the six infinity stones created during the Big Bang, each one allowing control over one of the aspects of time, space, and reality. As the film starts, he has the Power stone and acquires the Space stone from the tesseract that has been a part of so many previous MCU films. We then learn that Doctor Strange’s (Benedict Cumberbatch) amulet is a third (the Time stone) and the gem that powers the Vision (Paul Bettany) is a fourth (the Mind stone). The Soul stone and the Reality stone are elsewhere.

What ensues, then, is a collecting of all of the disparate characters from the MCU, leaving out Ant-Man, the Wasp, and Captain Marvel. Pretty much the rest of them, if they’ve been mentioned and are still alive, are going to be here somewhere. It’s a lot of various plot lines and character arcs flying together. If I sat down and counted off the top of my head, there’s probably a good two dozen superheroes with and additional dozen or so characters like Shuri, Wong, and Pepper Potts who are in the neighborhood but don’t get their own movies.

What these collective MCU movies do well is give each character a little bit of time. Naturally, some are going to be featured more than others—Tony Stark (Robert Downey Jr.) tends to always be a lead character. This film in particular gives a good amount of time to Vision and the Scarlet Witch (Elizabeth Olson) as well as Thor (Chris Hemsworth). Additionally, because she is the putative daughter of Thanos, we get a continuing storyline with Gamora (Zoe Saldana). The other characters, even the beloved ones like Black Panther (Chadwick Boseman) and Captain American (Chris Evans) are on screen a decent amount but don’t really have a story arc to them. They’re just there because they’re Avengers, and this is the movie that pulls most them together.

I haven’t yet seen End Game, but I imagine that the 1001 Movies will slot it in to the upcoming volume next year. While it’s not the final MCU movie by a long shot, it is the final MCU movie in this particular arc for the characters. I expect it to be here next year, although I’ve been wrong about such things before.

On the one hand, I appreciate that The Book has started adding a superhero film or two to the repertoire. Like them or not, they are important for understanding the current state of the film industry. I can’t help but think, though, that something like Spider-Man: Into the Spider-Verse would have given us a deserving superhero movie and added to The Book’s ridiculously small collection of animated films.

I suppose in retrospect it’s a good thing that I’ve seen most of the MCU movies before I got to this one (I’m still missing a couple, like Iron Man 3). If I hadn’t, I can’t imagine how much longer it would have taken to put up this review.

Why to watch Avengers: Infinity War: It sets up one of the largest conclusions in cinematic history.
Why not to watch: You really need most of the backstory to have a hope of understanding who everyone is.

Posted by SJHoneywell at 1:46 PM