Films: May
Format: DVD from Rockford Public Library on The New Portable. 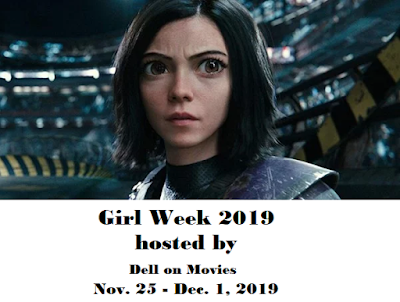 Every year, Dell over at Dell on Movies has a week dedicated to women in film. I don’t generally do a lot of blogathon-type things, but I like this one and thought I’d join in. Dell’s Girl Week is dedicated to women both in front of and behind the camera—women as directors and/or women as the main focus of the film. Since Wednesday is my horror movie day, I figured I’d add something to Dell’s event in the horror vein. That’s why I watched May, a modern and fairly upsetting take on the Frankenstein myth. 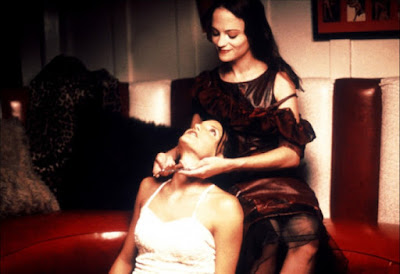 Don’t get me wrong, I don’t mind that it’s upsetting. It takes a long time for us to get where we’re going to go with May, but it’s also smart enough to slowly ramp up the crazy getting us there, so we’re not just waiting around for things to get out of control. We’re introduced to our title character, May Canady (Angela Bettis, but initially played by Chandler Riley Hecht), a friendless young girl who is cursed with a lazy eye. The initial cure is an eyepatch which causes her to be an outcast. Unable to make friends, she is given a doll named Susie that is encased in glass. Susie becomes May’s only real friend.

Flash forward to May as an adult, still friendless aside from Susie. Lonely and looking for attention, May finds herself attracted to Adam (Jeremy Sisto), particularly because of his hands. She is also mildly attracted to Polly (Anna Faris), her clearly lesbian coworker at a veterinarian clinic. This is an exciting new world for May, and sadly it’s not going to last very long. She manages to weird both Adam and Polly out with her clingy and bizarre behavior. Soon enough, Adam has moved on, as has Polly.

What we get as a slow build through this is the fact that May is not merely sad and lonely, but psychotic. It’s not clear initially, but May is under the impression that Susie is alive and speaks to her. When, through a series of accidents and misunderstandings the glass case that Susie lives in breaks (shattering the doll as well), May decides to live up to her mother’s motto of, “If you can’t find a friend, make one” in a very literal sense.

As mentioned above, this is a Frankenstein story, so what May is going to do is fairly obvious. It’s enhanced by the fact that throughout the movie, much of her interaction with other people is her commenting on a particular body part that she finds attractive in that other person. Adam’s hands, Polly’s neck, a random punk’s tattooed arm, etc. Once we reach that point in the film, May is clearly shopping for pieces to make a perfect whole.

May’s psychosis explains a great deal of what happens here. She is clearly the lens through whom we see the film, which means that many of the stranger parts of the film can be taken as coming from her particular non-reliable psychosis. That being said, I have a significant problem with the story—the source for May’s loneliness and isolation. I don’t buy the idea that having a lazy eye would make her friendless. She’s not depicted as strange or weird as a child at all—she just has a lazy eye and thus wears an eyepatch. And for that, she’s ostracized.

I don’t buy this because I knew kids with a lazy eye or something similar when I was a kid. I wasn’t a particularly nice kid in any respect, and I realize that plenty of kids are cruel about differences like this, but I don’t recall those kids being particularly disliked or shunned because of a lazy eye. Sure, some kids were mean, but not all of them. We can assume that perhaps May has other problems here that lead to this behavior, but that’s never brought out in the movie. All we have as a reason for her psychosis is her being ignored and shunned, and the only reason we are given for that is the eyepatch she had to wear.

Seriously, though, that’s my only real complaint here. May takes some time to set itself up to running, but once it gets going, it charges full speed ahead. Movies like Starry Eyes followed this basic idea in terms of the slow, steady build to an intense series of really upsetting and awful moments.

There are echoes of other films in May, stretching back to films like Eyes Without a Face and even schlock like The Brain that Wouldn’t Die to others like Re-Animator (and more specifically Bride of Re-animator). There are also indications here of films like American Mary and Excision to come.

May is disturbing in the best ways. It could stand a little work in the set up, but once we accept the odd premise, it’s relentless.

Why to watch May: An interesting take on the Frankenstein story.
Why not to watch: The premise doesn’t really wash.

Email ThisBlogThis!Share to TwitterShare to FacebookShare to Pinterest
Labels: horror, Lucky McKee, May