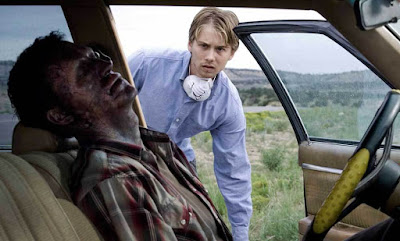 Plagues are inherently scary, I think. When it comes to movie monsters, in most cases, or at least some of them, it feels like you can fight back against them. Sure, most of us are going to be dropped pretty quickly by a vampire, but with a sharpened stake, at least you’ve got a chance. Someone’s gonna end up being the final girl, after all. But with plagues, it feels like there’s not much that can be done. With the coronavirus now moving through the world, the idea of a killing pandemic is especially terrifying. So, naturally, I watched Carriers, a film about a virulent plague that more or less wipes out the entire planet.

We’re not going to see a lot of the plague here in terms of masses of people dying. Carriers starts with the unnamed plague having more or less wiped out most of the human population. We have four people driving in a car to start with. These are Brian (Chris Pine), his girlfriend Bobby (Piper Perabo), his brother Danny (Lou Taylor Pucci), and Danny’s putative girlfriend Kate (Emily VanCamp). We learn about the plague more or less from a bit of exposition right before the title card drops. The plague is highly contagious and anyone coming into contact with a plague carrier needs to disinfect anything that that person has touched in the last 24 hours. Plague carriers are also highly contagious themselves, as the contagion is airborne.

The four are on their way to a beach where Brian and Danny use to go in the summer, with Bobby and Kate coming along as the only people still around. As the film starts, the quartet is confronted by a man named Frank (Chris Meloni) and his daughter Jodie (Kiernan Shipka), who is infected. He wants gas, but the group avoids him and drives on, but are pulled up short a few miles down the road when their car breaks down and they are forced to return. After a stalemate, a sort of truce is worked out. Frank and Jodie are walled off in the back of the vehicle while the rest of the group sits up front after having washed everything down with bleach. Frank has heard of a place that might have a cure for the contagion, and demands that the group head there.

Of course there’s no answer to the plague there, and things go from bad to worse as Jodie inadvertently infects Bobby just before Brian abandons her and her father. Eventually, the group finds a golf community and spends the day there, not realizing that it is the home base for a group of survivalists out scouting the area for supplies.

In a lot of respects, Carriers plays a lot like 28 Days Later with a very different type of infected. These aren’t mindless attackers that attempt to infect others, but true victims, most of whom are already dead once the film starts. In that respect, it also feels a bit like The Stand, or at least the first episode of the miniseries/first 250 pages of the book. The idea is an interesting one. Plague stories are always compelling because of how they work and because of how vulnerable it feels like we always are. In that respect, Carriers is no different from any other film with the same basic theme. Where I think the movie falls short requires a spoiler tag.

At the end of the movie, with Bobby infected and left behind, Brian eventually kills a couple of people for additional gas. Danny protests, and Brian—fully knowing he is almost certainly infected from Bobby—gets right in his brother’s face, breathes on him, and probably spits on him, too. This is despite knowing exactly how the plague is transmitted and knowing that he is almost certainly infected. That’s just…not the way someone this geared toward survival would work.

While what is under the spoiler tag is a problem for me, it’s not a deal breaker. What is is the fact that the virus seems to be a very different experience for different people. One person is fine for a couple of days after infection, another person is almost immediately made infirm after becoming infected. It’s evidently a disease that responds to plot necessity.

Carriers wants to be an interesting film, and I think it wants to have something to say about the human condition. But the film was released in 2009 after the success of Chris Pine’s first Star Trek film. It was actually made and left on a shelf from 2006. I leave it to you to figure out why this would be the case.

Why to watch Carriers: Plagues are scary.
Why not to watch: The people in this movie aren’t that bright.