I Heard You Paint Houses

Films: The Irishman
Format: Streaming video from NetFlix on the new internet machine. 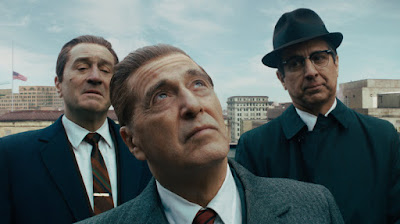 While I’ve never shirked from long movies in the past, I can’t say that I’m always geared up for them. The Irishman is far and away the longest movie on the latest batch of Oscars, so when I had a spare day to watch it, I did. Kind of. I watched about 2 ½ hours of it and finished it up in the morning. Seriously, it’s a long friggin’ movie. It’s also very much a return to Scorsese’s roots, as well as the roots of much of his main cast. It was probably a foregone conclusion that The Irishman would score a slew of nominations, and now that I’ve seen the movie, I can understand why.

This is the story of Frank Sheeran (Robert De Niro), a simple Teamster who ran a route delivering meat. Through a series of chance meetings and coincidences, Frank became involved in the Pennsylvania Bufalino crime family headed by Russell Bufalino (Joe Pesci). Through additional connections, Frank eventually becomes an enforcer and semi-bodyguard for Jimmy Hoffa (Al Pacino). Frank, we quickly learn, has no qualms about killing, something he learned in Italy in World War II. As it happens, this turns out to be a very useful skill.

Early on, Frank does little more than run errands for people. In fact, much of his early involvement with crime is selling sides of beef to a club owner known as Skinny Razor (Bobby Canavale). When he is eventually accused of theft, the Teamster lawyer is Bill Bufalino (Ray Romano), who successfully defends Frank in court. This serves more or less as Frank’s formal introduction into the family, and from this point forward, Frank does what he can for Russell. When he takes on extra side work that turns out to be an attack on Russell’s friend Angelo Bruno (Harvey Keitel), Frank learns to clean up his own mess, including the man who hired him. From this point forward, Frank is indebted to Russell, and starts to perform a number of services for him, including hits, referred to in the trade as “painting houses.”

The real meat of the story comes when Frank is introduced to Hoffa and becomes involved in a number of Hoffa’s dealings. Frank often stays in Hoffa’s hotel rooms, not because there is an immediate camaraderie between them (although there is) but because doing so leaves no trace of Frank having been wherever the two are. This means that Frank is able to work at anti-union busting, performing a number of illegal actions to support Hoffa and the Teamsters.

The bulk of The Irishman is told in a sort of double flashback. In the film’s present, Frank is an old man in a nursing home. In the film’s main flashback, he and Russell, along with their wives, are driving to a wedding, conducting some of Russell’s business along the way. From this main flashback, we go back further in to Frank’s early years with the Mob and with Hoffa.

There’s a lot to talk about with The Irishman. The thing that got all of the attention, of course, was the de-aging work done by ILM. There were plenty of complaints about it, but to be honest, it didn’t bother me at all.

Beyond that, it feels like The Irishman was the movie that Martin Scorsese was born to make. This is everything his career has been building toward. Talk all you want about how Scorsese makes mob films and not much else, there’s a reason that people remember his gangster films so well. It’s a lot to say that this is Scorsese’s best film, but it ranks pretty high up there for me. It is of truly epic length, and yet I never really noticed it and I was never bored by it.

It’s also the best thing its main cast has done in a decade or more. De Niro is flawless as Frank Sheeran. He’s not terribly bright, but he’s a good soldier and does what he’s told. He’s not always happy about the results of what he does, either, but he knows what his job is and he does it without complaint. De Niro has rarely been better. The same is true of Pacino, who, under Scorsese’s firm hand, is kept under control and in character. Pacino has been in self-parody mode for what seems like a decade or more, and this is a return to what Pacino can do with a great role and a great director.

It’s also worth talking about Joe Pesci. I think it’s easy to remember Pesci for a lot of his comedic roles more than his serious ones. Think of Pesci, and you get Home Alone or My Cousin Vinny or even the Lethal Weapon franchise. This is a good reminder that Pesci is a damn good dramatic actor when he needs to be. He inhabits Russell Bufalino like a suit of clothing. Pesci came out of retirement to play this role, and it was worth it. He’s as good as De Niro and Pacino.

In short, I enjoyed the hell out of this. It is a major ask to spend 210 minutes in front of a screen, but as I said, I was never bored and never really concerned about how much was left in the film. If any of the three main actors or Scorsese himself end their career on this film, they’d be going out on a very, very high note.

Why to watch The Irishman: This is the kind of thing Scorsese and his cast were born to do.
Why not to watch: Three-and-a-half hours? C’mon, Marty!