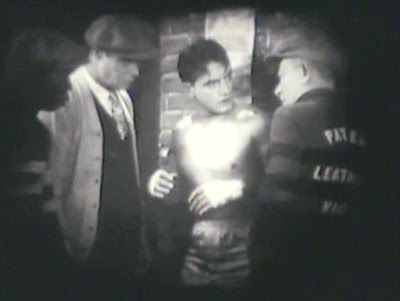 I’ve said in the past that I have difficulty with silent dramas. They don’t hold up nearly as well as silent comedies and silent horror movies. The reason is pretty simple. Silent comedies still work because a guy falling on his butt is funny whether you can hear it or not. Silent horror movies still work because good horror relies on things like atmosphere, and silent movies are loaded with that. Dramas from the silent era tend to involve a great deal of overacting and a great deal of melodrama, though, and so that’s a much harder sell. That said, I didn’t really know anything about The Patent Leather Kid other than it earned Richard Barthelmess one of his two Best Actor nominations for the first Oscars.

The Patent Leather Kid is a movie of three very literal acts. When it begins, the Patent Leather Kid (Barthelmess) is a boxer who has a particular reputation. Most boxing fans aren’t fans of his because of his attitude. Most of them want someone to knock a little humility into him. The second act concerns the Kid dealing with fallout of his own opinion against going to war when the U.S. enters World War I. He’s eventually drafted and deals with boot camp. The third act has him going to war and dealing with his own reticence at being in combat, overcoming that, and (of course) being wounded.

In the first act, we get a few fights, which are not very convincing, but aren’t specifically less convincing than a lot of movie boxing. We also meet the other people who are important in the Kid’s life. His manager, Jake Stuke (Matthew Betz); his trainer, Jimmy (Arthur Stone); and his sparring partner who is Black and literally named Molasses (Ray Turner) seem to initially be the only ones on his side. Eventually, he does a little verbal sparring with Curley Boyle (Molly O’Day), who eventually becomes his girlfriend.

And then the war starts. Curley wants to support her man, but the Kid doesn’t want to fight without getting paid for it. She heads off the Europe to entertain the troops and eventually the kid gets drafted and ends up with Jimmy. He also ends up being trained by Hugo Breen (Lawford Davidson), who was Curley’s main squeeze before she hooked up with the Kid.

Once they get to Europe, the Kid gets in trouble with Breen, finds Curley and argues with her, and realizes that in combat, he’s a coward. Naturally this is going to play out before the end of the picture, and it’s going to play out in exactly the way you are assuming it will. I’m going to spoil this, so be warned.

Jimmy gets shot up on an attack, and suddenly the Kid finds his courage. He attacks a German position, but is wounded in the process when the building the German snipers were in collapses on him. Sent to the hospital, he naturally turns in up in Curley’s ward, since she is now working as a nurse. He pulls through, but appears to be completely paralyzed.

We get a reunion with Molasses, who is covered in medals. Just when you think The Patent Leather Kid might not be extremely racist, it turns out that Molasses wasn’t actually awarded any of those medals; he won them in craps games. Anyway, eventually, the Kid is sitting in his wheelchair with Curley behind him when a flag is raised. He is so inspired and filled with patriotism that he overcomes his paralysis and stands up and salutes. Pure glurge.

I didn’t hate The Patent Leather Kid, but I didn’t love it, either. It does have all of the problems of most silent dramas. It’s too long, includes too much that could have been ignored, and is far too melodramatic, particularly in the last 20 minutes or so. It’s interesting for what it is, and it’s also interesting to see that Oscar’s love of boxing and boxing movies started very early.

As for Barthelmess, he’s fine. It’s a stylized performance, of course, but it’s also consistent with most performances of the time. Is it anything special? Not really.

Why to watch The Patent Leather Kid: An introduction to Oscar’s love of boxing.
Why not to watch: Boy, if you’re not a fan of war, the ending is really going to piss you off.