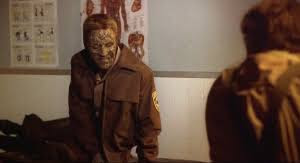 When I first put up the horror movie lists, I’m not sure when that was, but it was a considerably long time ago, I knew there would likely be a few that were hard to find. This was particularly true of the Fangoria list, since it was specifically a list of movies that were underseen in general. A couple of those movies have proven very difficult to track down, but I did finally manage to locate Shadow Builder (also known as Bram Stoker’s Shadow Builder). If you thought Stoker only wrote “Dracula,” you’d be wrong. But the short story of “Shadow Builder” is an odd one, reading in a lot of ways like the work of H.P. Lovecraft. But I was excited to see this, not the least of reasons being that it features Tony Todd and has Michael Rooker starring as a bad-ass priest.

We start with something along the lines of a satanic ritual that brings forth a demon set to destroy the world. A priest named Jacob Vassey (Rooker) breaks up the ritual, but not before it is completed—the creature has been summoned. Soon enough, the creature begins killing—and it does so by turning its victims into something like a solid shadow. Any victim of the creature touched by light is essentially dispersed. The creature itself, eventually called Shadowbuilder (Andrew Jackson), is also damaged by light, but as it acquires more and more souls, it becomes less able to be damaged by light sources. The goal of the creature is to sacrifice a particular child on an altar during a solar eclipse.

That child is 12-year-old Chris Hatcher (Kevin Zegers), who seems like an entirely normal kid aside from the fact that when he was baptized he manifested the stigmata. The Shadowbuilder needs to strengthen itself to be able to be immune to the effects of light and also needs to get close to Chris so that he can be captured and sacrificed at the right moment.

It’s the getting there that is going to be interesting. Chris currently lives with his aunt, a veterinarian named Jenny (Leslie Hope), who is currently involved with the local sheriff, Sam Logan (Shawn Thompson). Sam is dealing with the sudden deaths of one of his deputies as well as the local coroner (who is killed by that dead deputy when he reanimates on the table in one of the film’s better sequences). Father Vassey shows up to help, and Jenny will also eventually enlist the support of Evert Covey (Tony Todd), the local weirdo who does seem to know quite a bit about the Shadowbuilder.

Shadow Builder works for a couple of reasons that are surprisingly subtle. The first is that as the Shadowbuilder gains in strength, he begins to affect the people around him. The whole small town starts going insane in strange and violent ways. A elderly man and his wife return from a game of badminton and, on a whim, he kills her with an axe. Why? Because the Shadowbuilder is beginning to influence people. Much of this manifests itself in people destroying lights, allowing the creature more freedom of movement. But it also manifests in some zombie-like behavior. It’s reminiscent in a lot of ways of a film like The Crazies. In one of the more disturbing sequences, we see a number of small children playing with dolls. It soon becomes evident that the kids are not playing with them, but are instead dismembering them. Later, that night, we discover that the doll parts have been laid in a pentagram.

It’s this kind of subtlety that makes Shadow Builder what it is. It doesn’t go for any gore at all, but instead goes for a sense of the disturbing, of the real, normal world being tilted a few degrees to one side so that things are just off enough to be disturbing. It’s not particularly scary in many places, and the ending is sadly predictable, but I appreciate that it gets there honestly.

There’s a great deal of Stephen King in this story—it’s not anything like a clear adaptation of the original Bram Stoker story. It has a lot of similarities to something like “Needful Things” in the way that the townspeople end up behaving, although The Crazies (or a zombie film of your choice) is probably closer to the truth, laced as it is with a large helping of The Prophecy. Still, there is a sense of a sort of underlying normal reality here. Shadow Builder feels set in something like the real world, and that’s largely in its favor.

The effects are interesting in places, but don’t always hold up. Beyond that, I enjoyed this quite a bit, far more than I expected to. It uses its influences well and creates something that, while it doesn’t entirely avoid all of the tropes of the genre, at least attempts to do something fun with them. And where else are you going to see Michael Rooker as a priest wearing a leather jacket and sporting twin 9mm hand cannons?

Why to watch Shadow Builder: It’s surprisingly entertaining.
Why not to watch: Not all of the effects have survived that well.