Working in a Coal Mine 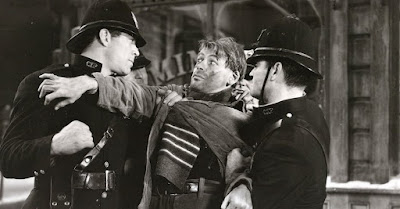 In the early days of Oscar, at least for a couple of years, voters were allowed to write in candidates for particular awards. This is why Paul Muni, who was not officially nominated for Black Fury in 1935, came in second to Victor McLaglen and ahead of all three nominated actors from Mutiny on the Bounty. This was an ability that was taken away from the voters after the next year. Anyway, it’s a film that really rises and falls on Paul Muni—something often true of Paul Muni’s films in general.

Honestly, I was kind of hoping for a gangster film along the lines of Scarface: The Shame of a Nation. Instead, I got something much closer to The Angry Silence that I watched a couple of days ago. Yes, this is a union picture involving strikes and scabs and corrupt officials. It’s called Black Fury not because of race or the “color” of someone’s nefarious deeds, but because it’s about coal miners, and one assumes that Black Lung Fury didn’t really sell in Peoria.

We’re quickly introduced to our characters. Our main guy will be Joe Radek (Muni), a thick-accented Slav who lives for the coal mine. Joe speaks like Russian who just learn English! That coal be there for him! Everyone like Joe Radek! Joe is convinced that he’ll soon have enough to buy a small farm, whereupon he’ll marry his girlfriend Anna (Karen Morley) and raise kids and pigs. Sadly for Joe, Anna isn’t looking to marry him. She wants out of the company town, and sees Slim (William Gargan), a company police officer, as her ticket out. Slim is being sent to Pittsburgh, and Anna insists on going with him. When Joe discovers that Anna is gone, he gets extremely drunk and crashes into a union meeting.

At that meeting, some of the workers want to hold steady with the union’s current tactics while another group wants to fight for more concessions. Joe, drunk as he is, advocates for fighting. He’s immediately latched onto by a radical group that is essentially looking to cause problems so that a Pinkerton-style organization can be brought in to keep the peace. In short, it’s a manufactured strike, with Joe as the unwitting leader.

Of course, things soon go south for Joe as the company is brought in to keep the peace and protect any scabs that are brought in to work the mine as well. Joe immediately loses all of his friends, since the people who are striking are now being forced out of the mining town for not being able to make their rent. The new workers and especially the new cops start lording their power over everyone, which leads to a difficult situation. Sophie (Sara Haden), the daughter of Joe’s former best friend Mike (John Qualen) is harassed by one of the cops. Mike goes to defend her honor, as does Joe. In the melee, Mike is killed by a cop named McGee (Barton MacLane) and Joe is laid up in the hospital.

For the third act, Anna is going to return and try to patch things up with Joe. For his part, Joe realizes that if the strike ends, the miners will lose all of the advancements they’ve made for a couple of decades, so he devises a plan to take a bunch of dynamite into the mine and hold out there, using it strategically to blow up entrances and threatening to take the whole mine down unless management gives in to his demands. And, of course, he’s going to have a showdown with McGee.

Black Fury defines the term “Hollywood Ending.” In the real world, there’s no way we would have anything close to the resolution that we’re given here. It’s a little bit ridiculous, honestly.

The truth is that Black Fury isn’t that great. Muni turns in a fine performance, but that’s pretty standard for Paul Muni. It’s not one of his best, though, and much of that comes from the very thick accent he’s decided to use for Joe Radek. It’s clear that Joe is not much of a thinker—he likes his beer and Anna and coal mining, and that’s pretty much it. To have him talk as if he’s translated from Russian into English via a third language just feels cruel.

Still, he’s the best thing in the film. I mean, I’m all for workers’ rights, but this one takes a very extreme position on what workers should be able to get away with. More realism here would be appreciated, but that’s not really what we tended to get from films in 1935, is it?

Why to watch Black Fury: Paul Muni really was the greatest actor of his generation.
Why not to watch: The story defies belief.