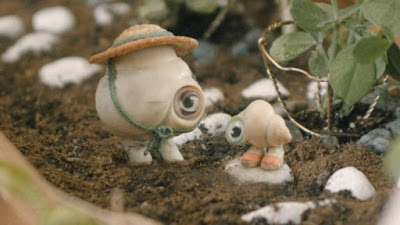 I’m winding up my week in St. Louis dog/housesitting for my daughter, so last night I gave myself a rare treat: I went to the movies. I saw Marcel the Shell with Shoes On because I knew it would never open within 30 miles of the corn town I live in. The theater, sadly, was mostly empty, although that did mean that I had a great choice of seats. But I have to say that I think I know a part of the reason the theater was so empty—it was $14.54 for a ticket to a 5:00 show. Sure, the seat was nice and everything, but that’s an insane price for a ticket.

Anyway, Marcel (which is how I will refer to this now—the full name is long enough that typing it out fully is tedious) is the story of a tiny inch-high seashell with a single eye, shoes, and an animated mouth. Marcel (voiced by Jenny Slate) and his grandmother Connie (voiced by Isabella Rossellini) live together in a huge house that is used as an Air B&B. Amateur filmmaker Dean (actual director and ex-husband of Jenny Slate Dean Fleischer-Camp) moves into the house during a separation with his wife where he encounters Marcel and decides to make a documentary about him.

Much of the movie initially is about how Marcel and Nana Connie live. We are told that a shell society needs at least 20 shells to be functional and something happened in the past to isolate Marcel and Connie. They have created a number of workarounds to survive, using a variety of household items to automate necessary tasks. Marcel gets around the house by travelling inside a tennis ball and climbs walls by making his shoes stick with honey. Despite being lonely and missing his family and friends, Marcel is upbeat about his life.

And then, Dean’s films about Marcel catch on and Marcel becomes a viral sensation. With this new platform, he asks for any help regarding locating his family—his clues are the people who lived there before, who had a big fight one night. He and Connie were watching 60 Minutes (their favorite show) when the shell community sounded the alarm because of the argument. When that happened, the plan was to go to the sock drawer. The man left, presumably with the contents of the sock drawer…and all of Marcel’s and Connie’s community.

The problem is that Marcel soon discovers internet fame doesn’t mean getting help for anything. His celebrity status is shallow because many of his fans are more interested in finding his house than they are in helping him find his family. That is, until he is contacted by 60 Minutes to appear on the program. However, just before this, Connie suffers an accident caused by the people searching for Marcel in his house, and Marcel doesn’t want to go on the show until Connie is healthier. Not even the prospect of meeting Lesley Stahl will shake him of this.

Marcel is a frustrating movie for a reason that is partly its fault and partly the fault of the way the movie industry works. It is a small movie, and while the stop-motion animation is fun, it’s not the kind of thing that necessarily wows an audience. Because of this, and because it’s a combination of stop-motion animation and live actors, this is going to get ignored over and over again. This will miss out completely come award season because 1) it’s a small kid-oriented movie that has grossed less than $4 million after more than a week, and 2) no one will know how to classify it.

This is incredibly frustrating, because this is one of the purest and most joyful films I have seen in a long time. This is what movies can and should be. For any film that is trying to be more than just entertainment, there should be something that moves us and touches us, that makes us come more into contact with who and what we are. Films are an artform and too often they are just a money grab instead. Marcel is sweet and touching, heartfelt and warm. It’s a lovely experience, and while the actual film runs a little more than 80 minutes (it’s just under 90 with extensive credits), it is everything it needs to be. I could have spent another half hour with Marcel happily, but I didn’t need to. The film is exactly what it should be.

We live in a world where there are terrible things happening. We exist on a climatic knife edge, freedoms are being sucked away from us, and there are times when I feel like 2024 might be the last fully free election of my lifetime. It’s easy to be frustrated, and to forget that there are still reasons to fight for the world we want. Marcel the Shell with Shoes On is a reminder that there can still be beauty and joy in the world, no matter how terrible it might be.

Why to watch Marcel the Shell with Shoes On: It’s ridiculously cute.
Why not to watch: This is going to get ignored come award season.

Posted by SJHoneywell at 9:36 AM

Email ThisBlogThis!Share to TwitterShare to FacebookShare to Pinterest
Labels: animation, comedy, Dean Fleischer-Camp, drama, Marcel the Shell with Shoes On