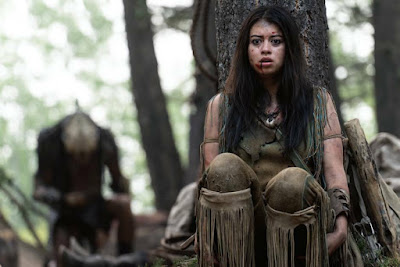 The original Predator movie is formative for science fiction/action films. Movies that have come after it are in one way or another either a reaction to it or attempting to distance themselves from it. I’ve seen the first sequel (years ago) but none of the others, and haven’t bothered with the AvP films that are tangential but clearly related. Prey, though, is one that interested me. Alien invasion movies are a dime a dozen, but we don’t get a lot where the aliens are showing up before the advent of modern technology. At the very least, the idea is a great one.

Prey takes place in the early 18th century somewhere on the Great Plains of North America (west of the Mississippi, east of the Rocky Mountains). A young Comanche woman named Naru (Amber Midthunder) believes she is ready to become a hunger despite her being trained as a healer. Her brother Taabe (Dakota Beavers) is good natured about this, both supportive of her desire to hunt but also enjoys teasing her as an older sibling. Naru believes that she has seen a thunderbird in the sky and that this means she is ready for a solo hunt, hunting something that is also hunting her, called a Kühtaamia.

Of course, it isn’t a thunderbird; it’s the predator’s ship, dropping off a hunter on Earth for a little sport. If you’re not aware of the basic Predator story, essentially, the predators (played here by Dane DiLiegro) are a race of hunters who arrive on planet and seek out the most dangerous foes they can. They have a bunch of advantages, of course. Much of this is their technology, which includes the ability to become essentially invisible (the design of the original predator was to look like a chrome man in a room of mirrors). There is some honor among them, though; they won’t attack something that doesn’t have the ability to fight back. It’s an unfair fight, of course. The predator has a number of high-tech weapons, while the most advanced human technology of the day is a flintlock.

So, it doesn’t take a lot of guessing to figure out that Naru’s hunt will be the predator. There are going to be any number of Comanche warriors who will battle it as well, vainly, of course, for the sake of the narrative. We’re also going to run into a large group of French trappers working the plains who are also going to run very much afoul of our visitor from space.

Prey is a film that doesn’t have a great deal of plot. It doesn’t need more than it has, though. This is a story about Naru’s journey, her coming of age story. Most of the other Comanche, aside from her mother (Michele Thrush) and Taabe, are really here as essentially fodder for the predator and for a way for Naru to learn about its weapons and skills. In truth, this is no different from the other Predator films, which functioned in much the same way.

What is so interesting about Prey is the setting. We don’t get a lot of action movies set in this time period or in this place. Last of the Mohicans is probably the closest we get to it, and much of that story is focused on the white guy. Native American stories are pretty thin on the ground, so this adds a great deal to the film. Action films are action films, after all, and horror is horror, so putting this in a place that we’re not used to seeing does make the experience a different one.

Of course, the moment Prey was announced and the basic idea was known, there were plenty of people stomping around about it being a film with an agenda. Why? Because the central character is both a woman and not white. As for me, I don’t really care at all. This is as good an action movie as you’re going to find and it would be as good if our central character were someone different. The fact that it’s a Comanche woman makes no serious difference to me—there’s a lot here to like. That said, this would be a very different movie if one of our trappers was the main character. It coming from a the perspective of a warrior culture is critically important to how the story works.

A big part of what makes all of this work is just how much we buy into what happens. Amber Midthunder is what makes this film work in every way that it does. She is compelling on screen and easily holds the camera’s attention. I believed her every minute she’s visible. It’s also worth noting that this is the first-ever role for Dakota Beavers, who has a rare sort of gravitas. Let’s get this guy in some more movies as quickly as possible.

As I said at the top, I haven’t seen all of the Predator franchise, but I can’t imagine that any of those I haven’t seen could rise to the level of this.

Why to watch Prey: This is what a Predator movie should be.
Why not to watch: You’re one of those people who thinks any movie that stars someone who isn’t a white male is somehow “woke.”

Posted by SJHoneywell at 4:34 PM