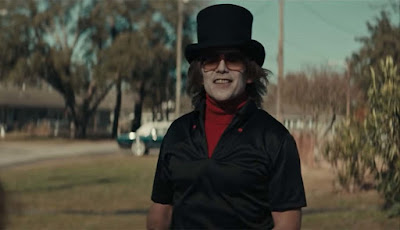 When The Black Phone came out, there was a good amount of hype regarding it, and as a horror fan, I knew it was one I would get to eventually. So, when I finally saw it pop up on the new acquisition shelf at the local library, I snatched it up. All I really knew about it was that Ethan Hawke is in it and that he was playing the killer/bad guy, and that the masks he was shown wearing were immediately being entered into the Horror Movie Creepy Mask Hall of Fame. Seriously, these are really good masks.

We’re going to start with a large bit of creepiness here, because it’s soon evident that the killer in this movie, given the name The Grabber (Ethan Hawke) by the local media, is someone who is targeting children. The person we’re going to spend most of our time with is Finney Blake (Mason Thames), which means that eventually, Finney is going to be, well, grabbed.

What we have set up early on is that The Grabber has been snatching pre-teen/early teen boys in a Denver suburb in the late 1970s. Finney and his sister Gwen (Madeleine McGraw) live with their alcoholic father (Jeremy Davies) in that town. We open on a baseball game where another local kid named Bruce (Tristan Pravong) takes Finney deep to win the game. We flash forward and learn that Bruce is one of the kids who is missing. Finney is a bullied kid who is protected by his friend Robin (Miguel Cazarez). Unfortunately for Finney, Robin is abducted as well.

There are two aspects of this story that dive into the supernatural. The first comes from Gwen, who we learn has prophetic dreams. She has “foreseen” some of the abductions, and this catches the attention of a couple of police detectives (E. Roger Mitchell and Tory Rudeseal), who are desperate for anything to help them with the case. It also earns her a couple of beatings from her father, simply because she was contacted by the police, and is therefore in trouble. When Finney is eventually abducted she starts having dreams about him that start showing more and more information.

The other supernatural aspect of this is much more directly supernatural. Finney ends up in a basement that is relatively barren. One of the things he finds is a black phone attached to the wall, which The Grabber tells him has been disconnected. However, the phone starts ringing for him, and the calls seem to be coming not from somewhere in town, but from wherever The Grabber’s murdered victims now are. Over the course of the film, Finney will speak to all of them.

The final wrench thrown into all of this is Max (James Ransone), The Grabber’s coke-using brother who has no idea that his brother is keeping young boys in his basement and murdering them. Over time, we learn bits and pieces from the voices on the phone while outside of the basement, Gwen deals with her brother being missing and trying to get anyone to take her seriously when she is talking about her prophetic dreams.

There’s a great deal to like in The Black Phone. This starts with Ethan Hawke, who is absolutely terrifying. Some of that comes from the series of masks he wears—some of which can be partially removed. Hawke’s performance is noteworthy in large part because for most of the film, he is acting with his face covered leaving him only his body and his eyes to do much in the way of acting. Equally up to the task are both Mason Thames and Madeleine McGraw, who offer solid and smart performances in their roles.

The biggest drawback are some plot holes that could be easily fixed. For instance, in one of his attempts to escape, Finney pulls a vent off the basement window, and in so doing causes some damage and leaves the window open and without any kind of shade. For a serial child murderer, leaving an open window into the spot where he is holding his current victim seems completely incompatible.

There is a similar problem when Finney actually does get out of the house at one point. The Grabber runs after him and catches him, and threatens to kill him if he makes any noise. Again, the serial killer here doesn’t take Finney home immediately and kill him despite him doing everything he could to get The Grabber caught. The Grabber seems needlessly casual for a guy who is going to get a life sentence at minimum if he’s caught.

Finally, I'm not sure how I feel about the alcoholic father. From a verisimilitude perspective, it works, and it does from a simple characterization perspective as well. But ultimately, it's not something that does a lot for the story. So, in terms of making The Black Phone a more real world, it does work, but since I don't see it doing much narratively, I'm not sure what the point was.

But all of this is minor. The Black Phone is a smart film with some very good performances as well as some creepy parts. Those masks are all-time horror movie great, too.

Why to watch The Black Phone: A genuinely solid thriller with a little supernatural kick.
Why not to watch: There are some odd little plot holes that don’t quite fit