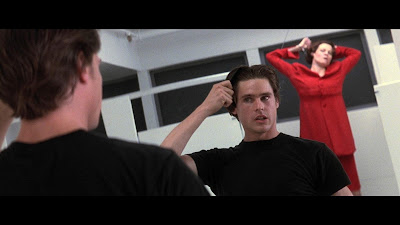 Pardon me for a minute while I gush. I’m not going to say that Copycat is an underrated movie. That word implies that I’ve found a particular value in a film that other people have not; it can be seen as an attempt to give myself a cache that I don’t have and didn’t earn. Instead, I’m going to say that Copycat is underknown and underappreciated. It’s a movie that I wish more people knew about. While it might be presumptuous to suggest that it belongs in the same sentence as The Silence of the Lambs, it’s not at all out of bounds to say that it belongs in the same paragraph.

In reality, Copycat probably isn’t quite as good as I think it is, but it’s got a couple of aspects that I find recommend it tremendously. The first is that it has a great cast, particularly Sigourney Weaver and Holly Hunter in roles that rank among my favorites for their careers. It also features Harry Connick Jr. as a serial killer, which turns out to be inspired casting. The other thing connects to the first; these are great characters. It would be easy to create these characters as one- or two-dimensional for the sort of “catch the serial killer” movie this is. Instead, we get characters that have real dimension and depth and history. I love that about Copycat and it makes the film so much better in my opinion.

So, at its heart, Copycat is little more than that “catch the serial killer” movie along the same lines as The Silence of the Lambs or perhaps Se7en from the same year. It’s a lot more similar to The Silence of the Lambs, though, since we’re going to have our investigators consulting after a fashion with a captured serial killer. The film starts not with the beginning of the killing spree but just as the San Francisco cops on the case come to the realization that there is a serial killer at work. M.J. Monahan (Holly Hunter) is taking the lead on the case, assisted by her partner Ruben Goetz (Dermot Mulroney) and more or less harassed by her former beau Nicoletti (Will Patton). The pair, particularly M.J., are advised by her boss, Lieutenant Quinn (J.E. Freeman), who worked the Zodiac case years previous.

The biggest twist in the film is the presence of Helen Hudson (Sigourney Weaver). Helen is a respected criminologist who specialized in serial killers but has retired and lives on the proceeds from her books. Her most celebrated case is Daryll Lee Cullum (Harry Connick Jr.), who she helped put away and put on death row. He is her most famous case because at one point he escaped from custody and attempted to kill her, getting as close as having her tied up in a public restroom. Because of this event, Helen is now a virtual prisoner in her spacious apartment, suffering from severe agoraphobia. Her contact with the outside world comes through her internet connection (circa 1995) and her assistant Andy (John Rothman).

Our killer (William McNamara) is not going to be a mystery, either. While we won’t know his name until the film is nearly over, we’ll know his identity early on. He’s another aspect of the film that is different from the norm. One of the main thrills of a good serial killer film is the killer’s M.O. In Copycat, as the name implies, our killer is duplicating crimes and crime scenes from the past. The first one we see is an almost picture-perfect version of a crime scene from Albert DeSalvo (the Boston Strangler); the next one is a duplicate of a crime scene of Hillside Stranglers Kenneth Bianchi and Angelo Buono.

To keep things interesting, we’re going to have our killer play the serial killer game of cat and mouse with the police. More specifically, though, he’s not going to bait M.J. and Ruben, but Helen, going so far as to breaking into her apartment more than once. And, of course, things are going to come to a very vicious and nasty head by the end.

One of the things I do have a problem with in Copycat is that I think there’s a death here that isn’t really necessary. While it works in terms of verisimilitude, it doesn’t actually play into the plot at all—it’s something that just happens (you can maybe force it into the plot based on something that happens at the end). I kind of get it, but it feels a bit like filler for a movie that runs just over two hours. Eliminate that 5-10 minutes at the end of the second act, and you don’t lose a great deal.

Beyond that, though, I don’t have a lot of complaints here. What we have is a lot of really smart characters playing a very deadly game with each other, and it works on just about every level. I love how fleshed out the characters are as well. These are people that feel real in a lot of ways. They have relatable beliefs and ideas. They aren’t “characters” in the sense that they are a collection of quirks, but people in the sense that we can guess at times how they would react to different situations. It’s worth noting that evidently this is one of Sigourney Weaver’s favorites of her own roles. It’s also my absolute favorite for Holly Hunter. I’m not always a huge Hunter fan, but I absolutely love her in this from the opening frame to the last one.

As I said above, I almost certainly like this a little more than it deserves, but I genuinely believe that more people should know it. Sadly, you’re on your own for finding it; NetFlix currently doesn’t have it, and you can’t have my copy, Cat.

Why to watch Copycat: It’s the natural child of The Silence of the Lambs.
Why not to watch: You don’t like things that are great.