Ten Days of Terror!: It Came from Outer Space 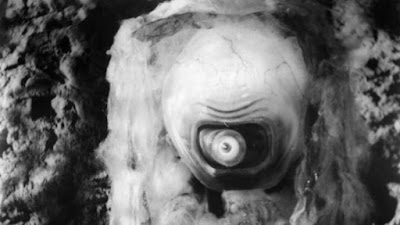 There’s a particular vibe when it comes to 1950s science fiction, specifically when it comes to alien invasion movies. While there are some rare exceptions, the vast majority of alien invasion films are going to feature aliens dead set on attacking, destroying, or enslaving the human race. I mean, I get it. On a visceral level, Independence Day is more interesting than E.T. the Extra-Terrestrial. Movies where the aliens aren’t evil are really rare. Movies where the aliens are neither evil nor good are vanishingly scares, but that’s what is on offer from It Came from Outer Space.

So, there’s a lot to cover here. We can start with the fact that It Came from Outer Space is based on a Ray Bradbury story, and that’s going to boost it a lot in my estimation. I’ve been a fan, perhaps even a fanboy, of Bradbury for a touch more than four decades. One of Bradbury’s many gifts was having a unique ear for dialogue. No one in the world really speaks like a Bradbury character, but the poetry of those lines is something really special. About half an hour into the movie, our hero, writer and amateur astronomer John Putnam (Richard Carlson) questions Frank Daylon (Joe Sawyer), a telephone lineman, about anything he might have seen. How Frank responds, talking about 15 years of working in the desert and the wind getting into the wires and talking is goddam beautiful even if no telephone lineman ever talked like that in the history of things.

But I’ve jumped ahead. It Came from Outer Space starts simply enough. John Putnam is entertaining local schoolteacher Ellen Fields (Barbara Rush). It’s soon evident that John is a transplant to this Arizona desert. He likes astronomy (she apparently likes astrology) and makes his living as a writer. That night, they see a meteor blaze through the sky and land nearby. Alerting a helicopter-flying neighbor, they head to the crash site. John climbs down and sees not a hot, glowing rock but a hexagonal hatch, indicating that this is no meteor, but a spaceship from beyond.

We’re going to get some contact from the aliens, and at least initially it’s not going to be that friendly. The aforementioned Frank, while driving down a desert highway with his assistant/coworker George (Russell Johnson! The Professor!), will be accosted by the creatures, which look like gigantic globe-y things with a large central eye. This will result in them appearing to be more or less mind controlled. As the audience, we’re going to see the truth. They aren’t mind controlled at all. In fact, the aliens are capable of replicating the appearance of humans. Because they need raw materials to fix their ship, they duplicate the appearances of Frank and George, keeping the real men safe in an abandoned mine where the ship has crashed.

I’m not going to go too much further into the plot here except to bring up the idea that It Came from Outer Space takes the unique position of not demanding that the aliens be either specifically malicious or benign. I suppose in one way of looking at it they are more or less benign, but the truth is that they are entirely neutral. They haven’t come to conquer Earth or to befriend humanity. They’ve crashed, and all they want to do is get off the planet and back on their way, and while they need some human technology, what they really want more than anything is to be left alone. It’s a fascinating take, closer perhaps to the writing of someone like Stanislaw Lem than more traditional Western science fiction authors. That said, it’s not out of the realm of possibility for Ray Bradbury.

It Came from Outer Space comes across as something like an indictment on humanity in a sense. This comes specifically from Sheriff Matt Warren (Charles Drake), who reacts in pretty much the way a stereotypical small-town sheriff in a Western town is going to react to what looks like an alien invasion. This is especially the case when the townspeople who are being duplicated by the aliens are shown as being essentially emotionless and far different or less than human in that respect. In fact, one of the real strengths of the film is that Sheriff Warren’s actions are completely understandable, and in 95% of alien contact movies, would make him the hero. In this case, it’s the information we have that he doesn’t that might cause us to think poorly of his actions.

In fact, the only thing I don’t really like about It Came from Outer Space is that the conclusion is a bit of a letdown. It’s a shame, too, because this does a lot to build up a disturbing and creepy atmosphere. The aliens are coldly nonhuman, switching from wanting to be left alone to being potentially murderous in a matter of moments. Give us a better ending, and this would be talked about like other classics (Forbidden Planet, The Day the Earth Stood Still) from the era.

Why to watch It Came from Outer Space: It does not go where you expect.
Why not to watch: The resolution is a big of a let-down.