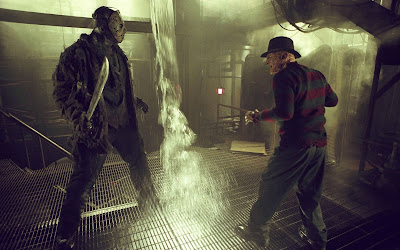 I suppose on some level Freddy vs. Jason was inevitable. We live in a world that gave us Alien vs. Predator and Dollman vs. Demonic Toys, so pitting two of the more popular supernatural killers against each other. Evidently, something like this was in the works for ages and wasn’t viable until New Line attained the rights to the Friday the 13th franchise. It is also alleged that the original treatment was to include Bruce Campbell’s Ash from the Evil Dead movies, but the rights couldn’t be acquired.

The conceit here is that Freddy Kruger is more or less forgotten on his old Elm Street haunts. The parents know about him, certainly, but the kids who are his victims no longer know or fear him. Since Freddy kills essentially through fear by infecting their dreams, there is no way for him to kill anymore. His plan, therefore, is to resurrect Jason Voorhees to instill the fear back into the Elm Street teens, which will then give him enough mojo to restart his own killing spree. I agree that this doesn’t make a great deal of sense. You kind of have to go with it.

What we’re going to get, more or less, is what you expect. Jason (Ken Kirzinger) is going to come back to life because Freddy Krueger (Robert Englund) imitates his mother and sends him not to Camp Crystal Lake but to Elm Street. Jason is going to start out at the very house where Nancy lived in the original A Nightmare on Elm Street. In this case, our resident is Lori (Monica Keena), who is spending the night alone while her widower father is out of town. Spending the night with her are Gibb (Katharine Isabelle) and Kia (Kelly Rowland). Gibb invites over her boyfriend Trey (Jesse Hutch) and his friend Blake (David Kopp). This means that eventually Gibb will run off with Trey for sex while Kia attempts to pair Lori up with Blake. This is despite Lori still carrying a torch for a former boyfriend.

And hey, Jason shows up and whacks Trey, then later on kills Blake and his father. The police show up, and naturally they are convinced that Freddy Krueger has returned, something they want to keep quiet. We will now get a little bit of a sidebar at a local asylum where we meet Will Rollins (Jason Ritter) and his friend Mark Davis (Brendan Fletcher), who have been her for years because they know about Freddy. They are institutionalized to protect the other kids on Elm Street. Oh, and Will is the guy that Lori is still pining for. And it turns out that the boys and others at the asylum are on a drug that prevents dreaming. We find out later that there are a number of people who have more or less overdosed on the drug, and for some reason, Lori’s father is responsible for this.

Long story short (too late), Freddy initially gets what he wants because his name starts being spoken in hushed tones. However, Jason keeps killing and stealing kills from Freddy. So eventually, they’re going to fight. This involves getting Jason back to Camp Crystal Lake and then somehow bringing Freddy out of the dream world and into the real world. And pretty much everybody is going to get killed.

There’s a lot here that, bluntly, is just dumb. The whole concept of somehow dragging Freddy Krueger into the real world doesn’t make any sense, for instance, or Freddy Krueger somehow being able to direct Jason Voorhees to target specific people at a specific time. In fact, the first kill here doesn’t make a great deal of sense. Jason stabs the shit out of a kid who has just had sex and then collapses the mattress on him so he’s bent in half backwards…and then he leaves. Jason leaves despite having four other victims right there.

In fact, pretty much everything here is uninspired. The deaths—and there are a lot of them—are pretty dull for the most part. The most disturbing part of the film comes at the start when we get the back story of Krueger. He was always a child killer in the mythos, but here he is very clearly torturing children and probably molesting them, and we’re supposed to root for him in some respect.

Now I admit that I’m not looking to Freddy vs. Jason for anything like political correctness, but there are moments here that seem gratuitous. Gay slurs, a racial slur or two, these aren’t necessary in a film from 2003. Again, I expect bad taste in places, but I don’t expect things that are aggressively antagonistic.

The biggest disappointment here, though, is the final confrontation between the two horror heavyweights. We don’t really get a final winner for one thing, which is no doubt done to pacify fans of both film series. The other problem is that Freddy and Jason don’t actually seem to use their abilities to fight each other. They just stand toe-to-toe and beat on each other with machete and knife glove until the film ends.

Freddy vs. Jason therefore commits the ultimate crime: it’s boring, and there’s no coming back from that.

Why to watch Freddy vs. Jason: Like it or not, it is a clash between a pair of horror icons.
Why not to watch: This film really wasn’t necessary.