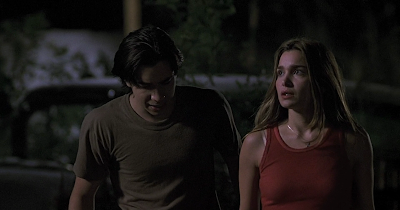 I go to strange places sometimes for this blog. There are times when I go places I really don’t want to. I mean, I did watch Salo, after all. With the They Shoot Zombies lists, there are some places I almost certainly won’t go; there are movies here that I desperately do not want to see. There are a number of reasons for that. In the case of Jeepers Creepers and its sequel, my reticence had nothing to do with the movie or its plot. It had everything to do with its director, Victor Salva.

The Me Too Movement has changed a lot of things and a lot of how we look at movies. Acclaimed actors and directors have had their careers ruined because of their past actions. Victor Salva is someone whose career legitimately could and should have been ended on these grounds. After his first film, Salva was accused and convicted of molesting one of the stars of his film. He served a year in prison for it. His first film afterward, Powder, could be seen as something like an attempt to explain or even excuse his behavior. So, with the Jeepers Creepers movies, I’m in the position of watching something made by a guy who admittedly molested a 12-year-old. Has he paid his debt to society? Does he get forgiven or even a second chance? I don’t know.

Jeepers Creepers is a film that starts really well. Brother and sister Darry (Justin Long) and Trish (Gina Philips) and driving through the middle of nowhere in Florida on their way home for spring break. While the road feels deserted, they are nearly run off of it by an ancient truck. Later, they catch up to the truck pulled over at an abandoned church. The driver of the truck appears to be dropping body-shaped canvas bundles down a pipe. The driver notices them and pursues, attempting to run them off the road a second time.

Eventually, Darry and Trish manage to get away, but Darry is plagued by guilt, convinced that what they saw was exactly what it looked like. He convinces Trish to go back to the church, and he investigates the pipe, eventually sliding down into it to discover a place of horror. Bodies festoon the walls, all with gaping wounds crudely stitched up. Our pair eventually get away pursued once again. The eventually reach a diner and call for help. It’s also here that they get a call warning them of what is to come for them.

I’ll cut to the chase here. What we learn eventually is that the driver of the truck and the evident owner of the horror mausoleum is a creature called the Creeper. Every 23 years, it emerges from something like hibernation and feeds for 23 days. Specifically, it feeds on people. More specifically, it seeks out people for particular qualities that it wants to incorporate into its own body. It does not kill indiscriminately; it chooses victims for specific body parts/reasons and pursues them mercilessly, ignoring everyone else unless it has no choice.

They are going to have a police escort that gets wacked and are eventually going to hook up with the psychic (Patricia Belcher) who called them in the diner. And through all of this, the Creeper will continue to chase them without mercy and without rest, relentless in his pursuit of Darry and Trish. The psychic seems to know everything that is going to happen, including the fact that only one of them is on the creature’s hit list, and that there will be no real possibility of escape.

In all honesty, Jeepers Creepers starts really well. I really like the relationship between Trish and Darry. They act like a real brother and sister would. There’s a sense of constant low-grade annoyance between the two of them until things get serious and then both of them are willing to do anything for the other. It’s worth saying that I don’t really consider Justin Long all that much when it comes to any sort of film in general and yet Jeepers Creepers demonstrates that he has a talent for looking believably terrified.

Where the movie goes off the rails is the moment that we actually see the face of the Creeper. Up to this point, there’s a great deal of mystery and some good scares because we don’t know what might be chasing after these two kids. We don’t know what is going on in that horror of a basement under the abandoned church. And then we see the monster and it turns out he’s just another boogeyman instead of this thing that we’ve been creating in our heads.

I find the ending unsatisfying as well, and more than a little creepy. It’s impossible for me not to look at a film like this in some respect as being analogous to the crimes for which Salva was convicted. Read that way, a monster that is implacable, feeds on the fear of its victims, and cannot be stopped from what it wants is truly horrifying. 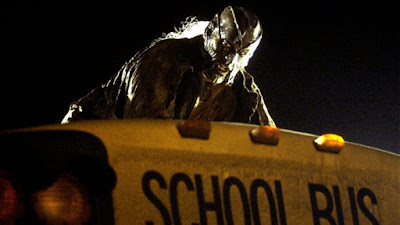 When it comes to Jeepers Creepers 2, I go into it with the same questions and reservations about the director that I had with the first film. That hasn’t changed and wouldn’t have changed years ago were I seeing this films when they were new. The problem for this film and for Victor Salva is that this time, I’m going in with the knowledge that the first film could be clearly read as an ugly allegory for being a predator. I’ve got the additional bias against the film because it’s a sequel, and horror sequels are rarely as good as the original film. This is also considerably longer than the original film, something that I don’t really see as a positive in many cases because increased length tends to happen because the director has “ideas” he wants to include. Finally, I know going into this film that I genuinely don’t like the monster. It’s much better as a faceless thing, and in Jeepers Creepers 2, we’re going to get a lot of its face.

Despite the two-year break between films, Jeepers Creepers 2 takes place just a couple of days after the first film. Truthfully, Jeepers Creepers kind of wrote everyone into a corner, since the mythology dictates that the Creeper is only active every 23 years. (It’s worth noting that there is in fact a third movie in the series, and it takes place between the first and second film. I mean, it’s a cool idea for a monster, but it makes sequels and follow-up films difficult when you have to wait 23 years for the next story.

In fact, Jeepers Creepers 2 kind of compounds the problem of needing to wait 23 years for the next film. This film takes place on essentially the last day of the Creeper’s reign of terror. The film starts with the Creeper flying off with young Billy Taggart (Shaun Fleming), an event witnessed by Shaun’s older brother Jack (Luke Edwards) and father Jack Sr. (Ray Wise). This will eventually become important, as both Jacks Taggart will be helping out eventually.

Once we’ve lost Billy Taggart, the Creeper’s attention is going to turn to a bus load of high school kids. These kids are on their way home from a basketball tournament where they evidently won. Along with the team there are a few cheerleaders, the coaches, and the bus driver. Because these will be our new victims, we need to find a way to strand them in the middle of nowhere so the Creeper can come pick off the ones that it has chosen. This happens with some homemade shuriken that are used to knock out the bus’s tires, leaving the bus stranded on that same deserted highway from the first movie and with evidently no phone service or contact on the bus’s radio.

And this is precisely where Jeepers Creepers 2 loses me. The Creeper shows up, gets rid of the adults, and then stalks the bus, clearly picking out about half a dozen victims that will be who he stalks for the rest of the film. The rest of the characters no longer matter unless they specifically get in its way. The exception to this rule is one of the cheerleaders who is granted visions of both Billy Taggart and Darry (Justin Long) from the first film and who somehow has all of the creature’s lore imparted to her—she knows about the 23 years/23 days thing and somehow understands that the 23 days are coming to an end. I’m not even going to bother naming the character because it doesn’t matter. None of them do.

That’s the problem with the mythology that is being created here. Jeepers Creepers in all of its varieties makes for good campfire stories, but it doesn’t really work as a film narrative. The idea that the creature is specifically targeting specific victims means we suddenly don’t have to worry about what happens to huge chunks of the cast, which means those members of the cast no longer matter. And since a huge part of the mythology that we learn is that nothing will prevent the Creeper from gathering its victims, the only mystery becomes how someone will be captured and killed, not if.

There are a couple of fun moments here. One happens when one of the alpha players wants everyone the Creeper has picked out to leave the bus only to be confronted with the fact that he was apparently chosen as well. There’s also a bit where the Creeper is attacked and impaled through its head. It rips the head off one of its victims, then tears off its own head and replaces it with the new one. That was fun.

Beyond that, though, there’s really nothing here. The creature is a lot less scary this time around because it’s now a known quantity. It picks out its victims, and suddenly we go from a bus full of potential fodder to about half a dozen with some characters that don’t matter added in. It’s a misfire on almost every level. I’m not disappointed that Jeepers Creepers 2 isn’t as good as the marginal first film. I honestly didn’t expect it to be. I’m disappointed that it’s so much more substantially worse.

Why to watch Jeepers Creepers: The first half is solid.
Why not to watch: Once you see the creature, it goes downhill.

Why to watch Jeepers Creepers 2: Ray Wise is pretty great.
Why not to watch: Any mystique or mythos created by the first film is more or less ruined here.