"Based on a True Story"

Film: The Conjuring
Format: DVD from Cortland Public Library on The New Portable. 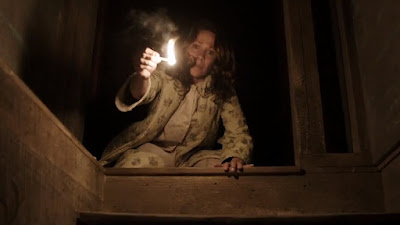 Say what you will about The Conjuring, the producers and director James Wan made something that is terrifying for people of a particular mindset. The story behind the production is that this was handed an R-rating by the MPAA immediately. When asked what could be done to bring the rating down to PG-13, they were told that there was nothing they could do. The film is simply too scary to ever be rated PG-13. There’s no gore, no real violence, not much language, and no nudity. It’s just too scary to be seen by kids without supervision.

So is that really the case? It kind of is. There are some supremely scary moments in The Conjuring, and I appreciate that a great deal. The problem for me is that so much of what makes this movie scary for many people is completely lost on me. The claim is that this story is based on the case files of Ed and Lorraine Warren, a pair of paranormal investigators who have claimed to be involved in real hauntings. Well, that’s fine, but I don’t buy into the supernatural. I don’t doubt that they’ve had some interesting experiences, but for me, things like demonic possession and the like is about as real as pixies and leprechauns. When you don’t have that basic belief, a great deal of the impact of this story is lost.

This is also the movie that gave us Annabelle, the evil possessed doll. It’s kind of strange, though, because Annabelle only figures into this movie a little bit. This is instead the story of a house possessed by an evil spirit and the family that eventually comes to the Warrens for help.

The Perrons, Roger (Ron Livingston) and Carolyn (Lili Taylor) move into a large farmhouse with their five children. That first night, the kids reveal a hidden basement while playing. Since you know this is a horror movie, finding the hidden basement isn’t going to bode well for the family. The weird and upsetting things start happening right away. These start slow (clocks stopping at 3:07 AM) and soon accelerate into being full-on evidence of a haunting. Noises, laughter, objects moving and being smashed, and a wonderful sequence where Carolyn gets locked in the basement with clear tangible evidence of the supernatural.

What follows from here is about what you expect is going to happen. The attacks keep going, and while there is some evidence that the kids are involved a bit, most of this focuses on Carolyn as the sort of weakest link/most potential for creating harm. And, because this is a film that involves them, Ed (Patrick Wilson) and Lorraine Warren (Vera Farmiga) are going to get involved.

I should say that I genuinely appreciate the fact that The Conjuring doesn’t spend a great deal of time ramping things up slowly. This is not a slow burn film; when the Warrens show up to the house, the evil is immediately present, powerful, incredibly malevolent, and active. While I like a good slow burn as much as the next person, there are times when it simply takes too long. We know where things are going, or at least where the story promises us things are going to go. Because of that, there are times when it just makes sense for us to go there without dancing around it.

What I find for myself here is a position that is interesting but not unfamiliar. In fact, it’s very much the reaction I had to The Exorcist in many ways. I feel very clinical watching a movie like The Conjuring in that I understand on an intellectual level why this movie is scary for people and I understand that it probably should be scary for me. But it’s not. It’s very well made. There is some reliance on the jump scare, but not all of the scares come this way. There are moments of real terror here, at least for most people watching it.

Because so much of the film’s power comes from the insistence that it is based on reality, a lot of that power is lost on me. In a way, that allows me to be a lot more objective about this film, and objectively, it’s very good. I love that it genuinely goes for real terror here and not the gross out. It wants to not merely upset the audience or metaphorically splash the audience with blood and body parts. It wants to keep people up at night, and wants to do this not by making them sick but by making them scared to close their eyes. For a great many people, The Conjuring is entirely successful.

Since that is the case, it’s kind of successful for me. I think it’s about as good in that respect it can be for me, and while I’d have loved for it to really scare me more than it did, I can appreciate that it goes for the scares with as much gusto as possible.

Why to watch The Conjuring: If possession stories freak you out, this one very much will freak you out.
Why not to watch: I just can’t make myself believe it.