Everything All at Once 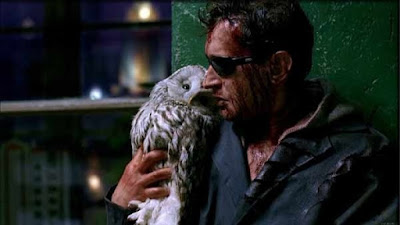 I have complained in the past about the fact that a lot of anime don’t have a great deal of exposition. I felt exactly the same way with Night Watch (also known as Nochnoy Dozor or Ночноы дозор if you prefer the Cyrillic), which is Russian and not Japanese. Night Watch is based on a novel, which is actually kind of reassuring. The problem with the movie is that it wants desperately to fit all of the material from the book in regardless of whether or not it has time to really help the audience understand it. A hell of a lot of concepts come flying out here right at the start and they aren’t fully explained except through a sort of osmosis.

So where do I start here? The basic premise of the movie is that there are forces of good and forces of evil in the world known as “Others.” The others are essentially human, but have a variety of powers and abilities like vampirism or being able to see future events. The “Light Others,” who are the good guys and the “Dark Others,” who are the bad guys have reached a truce. The truce is enforced by a group called the Night Watch (the good guys watching the bad guys) and a group called the Day Watch (the bad guys watching the good guys).

In Moscow, a man named Anton Gorodetsky (Konstantin Khabensky) pays a visit to a witch. Anton’s wife has run off with another man and he wants her back. The witch also tells him that his wife is pregnant, and the child isn’t his, and that the only way to get his wife back is to cause a miscarriage—which will require him to take responsibility for that death. He agrees and it turns out the witch is the real deal, but before she can finish her work, she is accosted by a couple of Others who can hide in plain sight, in something called “the Gloom.” Anton, it turns out, can see them, which means he’s an Other, and he is recruited to the Night Watch on the spot.

Now that we have Anton’s origin story out of the way, we can dive into the plot, which involves an ancient prophecy that a supremely powerful Other will be born and will eventually choose between light and dark and end the stalemate permanently. Anton, on the search for the child, comes across a nurse named Svetlana (Mariya Poroshina), who is a different part of the prophecy. Svetlana has been cursed by someone, so tragedy follows her. In fact, the curse is so powerful that she is followed by something called “the Vortex of Damnation.” Anton also finds a young boy named Yegor (Dmitriy Martynov), who appears to be a part of this as well.

In truth, I watched the first half of Night Watch and then went back and started over because I was so confused. This feels very much like a movie that was made for people who already know the source material and not someone like me who is walking in cold. In that respect, it reminds me a great deal of David Lynch’s version of Dune, which is incomprehensible for someone who doesn’t know the story. I may very well search out the original book and give it a go, and then watch this a second time and see if it makes more sense.

One of the problems with dealing with very dense material in the format of a movie is exactly what has happened with Night Watch. There’s so much going on here that isn’t really explained more than just a couple of throwaway comments or asides that the viewer is left in the position of needing to infer a great deal, and a lot of that is likely going to be incorrect. That’s a problem, especially for something that is potentially interesting, new, and creative.

What I’m trying to say is that Night Watch seems very much like the sort of story that lends itself more to a miniseries than a film. There’s a sequel (Day Watch), so a two-series show, perhaps 8-10 episodes each, would allow for a full discussion of the various concepts and ideas that are brought up in the story. We could have much more background on the Others, for instance. We could be given information on how the truce works, on the powers that people have, and a great deal more.

Truthfully, 8-10 episodes might be too much. I don’t know that the concepts here are hard, but there are a lot of them.

The bottom line is that Night Watch is interesting, but also completely opaque. I wanted to like this a lot more than I did because the ideas are good, but they are also so vaguely described that I’m not really sure I’ve understood everything.

Why to watch Night Watch: Cool ideas.
Why not to watch: Too many ideas for it to make sense.