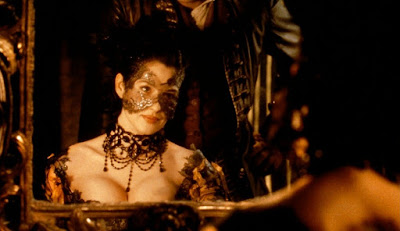 Silly me thought Brotherhood of the Wolf was going to be a werewolf movie. It’s not; as the title of this review would suggest, it’s a great deal closer to the old Sherlock Holmes story of the Hound of the Baskervilles. Our story is going to be told in the past tense, as a sort of reminiscence of a noble named Marquis Thomas d’Apcher (Jacques Perrin as an old man, Jeremie Renier through the bulk of the movie). The reflection he’s going to give us is of this event in his past, when the province of Gevaudan was held in the grip of terror by a marauding monster that killed more than 100 people.

Enter Gregoire de Fronsac (Samuel Le Bihan), a naturalist and taxidermist, who is exploring the flora and fauna of the area. He is intrigued by the stories of the creature and comes to investigate along with his Iroquois companion Mani (Mark Dacascos!). What he learns is that the creature is evidently wolf-like, but much, much larger. He also meets a number of the locals who are properly noble and stuffy. This is particularly true of weasel-faced Jean-Francois (Vincent Cassel), and decidedly untrue of Jean-Francois’s sister Marianne (Emilie Dequenne).

What’s going to happen, then, is a tale of betrayal, political intrigue, and double-dealing. Much of de Fronsac’s time will be spent mooning over Marianne, and an equal amount of time will be spent in the company of local high-priced courtesan Sylvia (Monica Bellucci). There’ll be racism a ’plenty when it comes to the “savage” Mani. And every now and then we’ll get some wolves being hunted and an occasional clue being dropped, like the metal fang of a large creature embedded in the body of a victim.

I’ve classified Brotherhood of the Wolf as a horror movie strictly because this appears on the They Shoot Zombies list of horror movies. While there are certainly some horror elements at work in this film, it is absolutely much more in line with a straight action movie. It’s less of a horror movie than something like Predator, for instance, and it has not only much the same action, but falls into some level of predictability. There are action movie beats here, not horror movie beats. This doesn’t damage to movie in any way, but it does make the viewing experience substantially different in a lot of ways.

What we also learn is that director Christophe Gans has a deep and abiding love of slow motion footage. I’d love to say I’m kidding, but I’m not; there’s a hell of a lot of slow motion in this film. A lot of the fight sequences feature slow motion of course, but that’s not the only place where it is used. We get slow motion horses walking, slow motion glances, everything that ain’t nailed down gets its slow motion glamor shot. Sans credits, Brotherhood of the Wolf tips in at roughly 137 minutes. If the slow motion footage were exchanged for footage shown at normal speed, we could be very close to getting this movie down to two hours.

Yes, that’s hyperbole, but only a little.

That said, I like this movie quite a bit. The characters are memorable and entertaining, and for all the use of slow motion footage the action sequences are pretty good. In truth, this is a story that owes a great deal to Sir Arthur Conan Doyle. In a lot of ways, it really is a new variation on the Hound of the Baskervilles, but in French before the Revolution rather than on some moors in the English countryside. I enjoy the way the politics plays out here as well. It’s a smart movie that places it’s fantasy monsters and events within the context of how the real world works rather than an idealized one.

I enjoyed this. It’s fun seeing actors like Mark Dacascos and Edith Scob show up in a film that doesn’t feel like it belongs to them at all. To be honest, as much as I did enjoy this, it could have used a little more (pardon the pun) teeth, but in a pandemic, you take what you can get from your movies, too.

Why to watch Brotherhood of the Wolf: It’s a fun take on a familiar story.
Why not to watch: The amount of slow motion footage probably makes the film 10 minutes longer than it needs to be.

Posted by SJHoneywell at 6:11 PM