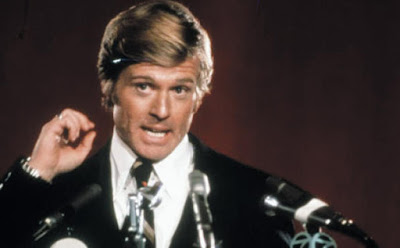 Think of any political campaign movie you’d like, scratch the surface, and you’re bound to find cynicism. In fact, in many of these films you don’t have the scratch the surface at all—the cynicism is right there for you to look at. That’s certainly the case with The Candidate, a film that is almost a retelling of All the King’s Men in more modern clothing. As the name of the film implies, this is the story of a political campaign, and specifically the story of a particular candidate as he goes from the early stages of his political career to a surprisingly hotly-contested race.

In California in the 1970s, posits the film, one of the state’s senators is a man named Crocker Jarman (Don Porter). Jarman has been a fixture in the Senate for California. He’s well-respected, well-liked, and a shoe-in to be re-elected. This is a problem for the Democrats, who don’t really have anyone they can run against him. Anyone they run is guaranteed to lose, so the campaign becomes not about winning but about putting their ideas out in front of the public. Marvin Lucas (Peter Boyle) needs someone to run, and having no better ideas, he taps Bill McKay (Robert Redford). Bill has several important things going for him. He’s idealistic, he’s photogenic, and he’s the son of former governor John J. McKay (Melvyn Douglas).

Bill is convinced to run because of the deal he’s offered. Since there isn’t much of a possibility of unseating Crocker Jarman, he’s given essentially a blank slate. He can say what he wants about any platform topic he likes, using this as an opportunity to spread his ideas and message to the people of California. With no serious opposition, he secures the nomination easily. This is where the trouble sets in, though. Current polling throughout the state doesn’t just have him losing, but being obliterated in the general election. No one expects him to win, but no one wants the party to be embarrassed by an overwhelming landslide, and Jarman’s 30+ point lead in the polls shows that’s exactly what is going to happen.

This is where the cynicism comes in. In an effort to make the race a little closer and not so embarrassing, Marvin and others on the campaign staff (notably Michael Lerner as Paul Corliss) slowly change the message that Bill is sending to the voters. He is carefully steered into positions that are a lot more mainstream and a lot vaguer than the ones he actually endorses. As Bill continues to compromise positions and is forced to speak on topics that he doesn’t care about—at all times specifically told to follow the party platform—his numbers start to rise in the polls. In fact, the further he gets away from his original ideas, the more the race starts to heat up.

The genius of The Candidate, and probably the reason it ultimately won the Oscar for Best Original Screenplay, is that none of this is obvious. As the audience, we need to pay attention to those small pieces of his soul that Bill McKay sells off to become more and more relevant to the people of California. It is subtle because it’s not until the final 15 or 20 minutes that even Bill himself seems to realize exactly what has happened to him. Promised the ability to run the campaign the way he wants to, he suddenly discovers himself having been managed into a place where he no longer believes what he’s saying because he’s not always sure what he’s saying.

Just like you can expect cynicism in a movie like this one, you can also expect relevance. The American political process has changed since 1972. It’s only gotten more and more like what is being depicted here. Art becomes reality in this sense, and it’s a huge benefit to the film. It could have very easily been something that lost any relevance to the modern world, but the problems that Bill McKay wants to talk about—race, poverty, unemployment—are still ones that plague us today. While the film may not have been trying to say that the political environment is more about the elections than what is done after them (and actually, it’s a good bet from the closing scene that that is exactly what it’s saying), it certainly seems to be hammering home that idea now.

If there’s a place where I’m surprised, it’s in the lack of love that Peter Boyle received for this film. Boyle was a wonderful character actor, capable in both comedies and dramas of being compelling on the screen. While it’s Redford who gets most of the attention here, it’s Boyle’s character who is movie and shaping him, subtly changing the game on him in incremental steps. I could see Boyle being nominated in a supporting role, and I’m a little surprised he was overlooked.

I liked this more than I expected to. It’s a smart film, and that always plays well with me.

Why to watch The Candidate: A story that’s still timely.
Why not to watch: Like most political films, there’s a wide stripe of cynicism in the middle of it.