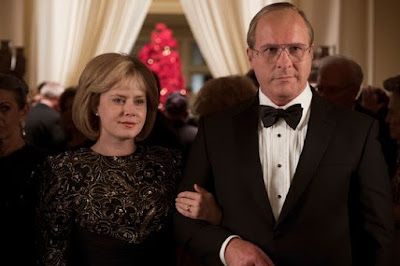 I’m going to warn you off the bat here: this is a political movie and I have political opinions. If you were a fan of George W. Bush or the current American president, you’re going to have problems with this review. This isn’t because I’m going to go on some kind of rant (I hope), but because Vice shows a precise template for exactly how, over the last 20 years, the American right has done everything it can to damage the democracy that we still enjoy. If you’re going to have a problem with me saying exactly that, the door is over there. If you’re going to go on a screed in the comments and use words like “libtard” and “cuck,” I’ll be deleting your comments. You’ve been warned.

Vice is more or less the biopic of Dick Cheney, who hovered around the halls of power during multiple Republican presidential administrations. While I can’t be sure, my guess is that Christian Bale was selected to play Cheney because he was able to slightly modify his Batman voice to be a little more understandable. Bale looks staggeringly like Cheney in a good portion of the film as well, something that can be mildly said for Sam Rockwell as George W. Bush and not at all for Steve Carrell as Donald Rumsfeld.

Anyway, this is the story of Cheney’s initial issues with alcohol and his dead-end life as a linesman after his budding alcoholism got him kicked out of Yale. Cheney is put on the straight and narrow by his wife Lynne (Amy Adams), and he eventually gravitates toward power, working as Donald Rumsfeld’s intern and learning the ropes during the Nixon administration.

The picture Vice paints of Cheney is an interesting one. His initial run for the House (his home state of Wyoming has a mere Congressperson, so in many ways, it is a more powerful position than the Senate for that state) shows him as someone unlikeable and dull. His constant problems with his heart force his wife to run his campaign for a couple of weeks, and the movie’s story is that Lynne Cheney was the true kingmaker here, propelling her husband’s career into Congress. All of this is sidelined when daughter Mary Cheney (Allison Pill) comes out as a lesbian, forcing Cheney to choose between his political career and accepting his daughter. It is literally the one humanizing moment of the film that Cheney chooses his daughter over politics. The film then offers us a false ending, telling us about the life that Dick and Lynne Cheney lived after his time in Washington.

Cue the record needle scratch sound effect that, to be honest, generations after my own beloved Gen-X will no longer comprehend in a visceral way. George W. Bush taps Cheney to be his vice president, which Cheney agrees to only with a huge expansion of his powers.

A great deal of this is common knowledge, of course. A lot of the film is likely pure speculation, but seems to be more or less vetted in terms of what happened and the known opinions of the main player of the time. What we’re presented with is a depiction of a man and an administration so keen to do whatever it wanted by any means that it stopped at virtually nothing to put people in place with the “right” interpretations of the Constitution and other documents to allow (among other things) the ability to declare war, torture, rendition enemy people without due process and a great deal more. The film makes the case that Iraq was a target long before 9/11, and that the attack on America soil was used as a pretense to create the desired war. While this view is certainly partisan, it is also compelling.

So let’s talk about the important stuff. Adam McKay’s screenplay has been both lauded and lambasted. It’s been hailed as a brilliant piece of political writing and as a hack job. His directorial work has gotten more consistent praise, and deservedly so. There are odd moments here that stretch the fourth wall without quite breaking it and other fourth wall breaks that are clear and disturbing. McKay wants us to see Cheney in his natural environment, but also at times in a world of disturbed and disturbing fantasy where sending people to Guantanamo is the equivalent to ordering something off a menu.

Bale is very good in this role, and I think his nomination is well-deserved. It is very much akin vocally to his time as Batman, but this works for Cheney as a character. The physical transformation is more impressive. Both Amy Adams and Sam Rockwell were nominated in supporting roles. I'm not convinced that Rockwell’s performance—while good—deserves the nomination. Amy Adams, on the other hand, appears to have been robbed of an Oscar once again.

The truth is that I found Vice difficult to watch. It’s hard to watch someone gleefully (or at least as gleefully as Cheney ever got) dismantle 200+ years of democracy simply because he wants to and because it benefits him financially. But that’s the world we’ve lived in for at least the last 20 years.

Why to watch Vice: It’s important.
Why not to watch: It’s infuriating.