My Name is Luca; I Live on the Ocean Floor

Films: Luca
Format: Streaming video from Disney Plus on Fire! 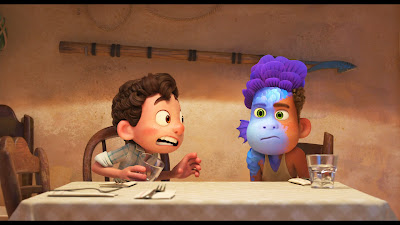 There was a time when Pixar could do no wrong. That probably stopped around the time of the Cars movies, or perhaps The Good Dinosaur. Going into Pixar these days doesn’t come with that virtual guarantee of the near perfection of their earliest films. But, even a weaker Pixar film tends to be a lot better than a lot of cinematic fare for children, and it’s the rare Pixar that doesn’t nab an Oscar nomination for animated feature. This is why there are only a couple of their films I haven’t seen. I knew I’d get to Luca sooner or later.

I’ll drop the dime immediately; Luca is mid-range Pixar at best. It’s a fine movie, which is generally true of Pixar in general, but it doesn’t feel like it’s really doing a whole lot that is new. It did almost immediately become a movie that was embraced by the LGBTQIA+ community for reasons that are immediately apparent to anyone who isn’t completely thick. It evidently wasn’t made specifically to be a metaphor for what some of my friends proudly call the Alphabet Mafia, but it’s close to impossible not to see it that way.

Our director is Enrico Casarosa, who is frank about Luca being based in large part on his own childhood in Italy. So, we’re going to be in a small coastal village in Italy called Portorosso. Actually, we’re going to be just off the coast of the town under water, because most of our main characters are going to be sea monsters. Luca Paguro (voiced by Jacob Tremblay) lives with his parents (voiced by Maya Rudolph and Jim Gaffigan) and spends his days herding goatfish. He is constantly told by his mother that the surface world is dangerous and he should keep his distance from the town. He is fascinated by the surface a la Ariel, a passion that is secretly encouraged by his grandmother (Sandy Martin).

One day, Luca encounters another sea monster of about his own age. This is Alberto Scorfano (Jack Dylan Grazer), who lives out of the water in a dilapidated tower across a small bay from Portorosso. This is where we learn that sea monsters, once they become dry, look exactly like humans. Luca and Alberto spend time together and dream of purchase (or building) a Vespa and using it to see the world. Eventually, Luca’s parents find out and decide to keep him safe by sending him to live in the deeps with his uncle Ugo (Sacha Baron Cohen). Instead, Luca runs away with Alberto, deciding that Luca’s parents would never risk going into the town.

It is here that the plot really begins. First, Luca and Alberto discover that the people of Portorosso are deathly afraid of sea monsters and the fishermen who are the bulk of the town’s economy actively hunt them. Second, they encounter Giulia Marcovaldo (Emma Berman), a girl who spends summers in the town with her father (Marco Barricelli) and is desperate to win a yearly race called the Portorosso Cup. They also encounter Ercole (Saverio Raimondo), a local bully who wins the Portorosso Cup every year despite being too old to compete in it, since it is a race for children.

Where this goes from here isn’t that surprising. Alberto and Luca team up with Giulia to beat Ercole and his two toadies while trying not to expose the fact that they are sea monsters in a town filled with people who are all too ready to use harpoons on them. Change “sea monster” for “gay,” and it’s not that hard to see exactly why Luca became a film championed by the LGBTQIA+ community. The very nature of a plot involving characters being forced to hide who they are so that a potentially aggressive and violent society will accept them makes that comparison almost inevitable.

So, the message is a good one, and it’s equally adaptable for immigrants trying to fit into a new country. So if this is the case, why am I saying that Luca is mid-tier at best? I think the issue here is that I was never really surprised by where the movie went. One of the things that Pixar often does very well is creating a situation that is resolved in an unexpected way. With Luca, I had a very good idea of exactly where we were going to end up long before we got there. The plot has very known and expected beats throughout, and so each moment of the film was telegraphed in large part.

It also feels a lot like a cobble of other films. Luca himself has a lot of aspect of Ariel, while Ercole comes across in no small part like Gaston from Beauty and the Beast. The plot regarding the Portorosso Cup race, a triathlon of swimming, pasta eating, and biking, is taken directly out of every “underdogs trying to beat the hugely favored winners” story ever made. If you’ve seen even a few of those movies (Breaking Away, The Mighty Ducks, Little Giants, The Bad News Bears, and on and on and on), where Luca is not only unsurprising, it’s expected.

So Luca is fine, but it’s not a film I think of as being very rewatchable. I’ve happily sat down with the Toy Story films or The Incredibles and other Pixar, but Luca is not one I will feel the need to see again for a long time.

Why to watch Luca: Like many a Pixar film, the message is worth seeing.
Why not to watch: It feels like lesser Pixar.