Let the Bodies Hit the Floor 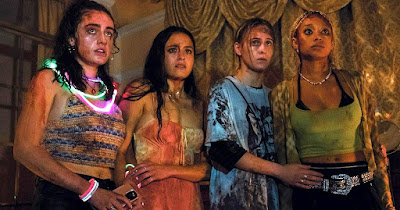 Genres go through very definite periods where tropes get changed or rewritten or played with. Scream did that for slasher movies, and after its release there have been a number of slasher and horror films that played with the idea of being more meta. Bodies Bodies Bodies appears to be at least in part another step in the evolution of modern horror and horror-adjacent movies. This is as much a commentary on many aspects of modern culture as it is a bloody whodunnit.

The elevator pitch here is that a group of very privileged 20-somethings who have known each other for years decide to have a party at the opulent house of one of their number during a hurricane and things get out of hand quickly. There’s a lot more that goes into it, but that really is the basics of the film. Our group of friends is going to include a couple of outsiders including who is clearly going to be our final girl since she is the character we tend to focus on.

The film starts with Bee (Maria Bakalova) and her girlfriend Sophie (Amandla Stenberg) heading to the party. Sophie is extremely privileged and Bee is definitely working class and is worried that this (as well as her Eastern European accent) will make her feel out of place at the party. It’s also worth noting that we open the movie with the two of them literally making out. I know this will sound prudish, but watching people suck on each other’s tongues is really off-putting.

Regardless, Bee and Sophie arrive at the mansion and we walk into a lot of relationships that have history and baggage. Emma (Chase Sui Wonders) is dating David (Pete Davidson), but Max (Conner O’Malley) has confessed his love for her and left the party. Alice (Rachel Sennott) has brought her new boyfriend Greg (Lee Pace) who is also about twice everyone else’s age. Jordan (Myha’la Herrold) is there on her own, and very much seems to want to be in charge of things. There’s a bit of tension around Sophie’s arrival—we find out that Sophie spent some time in rehab.

Sophie’s time in rehab is slightly problematic in the sense that as the hurricane hits, things turn quickly to booze and harder drugs. Eventually, the topic turns to the game of Bodies Bodies Bodies, which is one I know as Werewolf. Everyone gets a sheet of paper; one person has a piece with an X on it. That person is the killer (or werewolf). When the lights are out, the killer strikes, and with each murder, everyone decides on who is the killer and gets rid of that person. If they are wrong, the killer strikes again. It’s Among Us, but in the real world.

After a round of the game, Greg leaves after having been “killed” and David storms off after being ousted. Not long after that, David is found outside with his throat cut by a large kukri. And now the real version of Bodies Bodies Bodies starts to be played.

In this respect, Bodies Bodies Bodies is a very traditional movie of this type. As the film continues, people are winnowed out of the cast one by one and everyone accuses everyone else of being the actual killer. Throughout, those who remain are also concerned with their own inability to get online with the wifi down because of the storm. They compare their own troubled pasts and their family wealth and complain about their own difficulties and eventually all of their petty rivalries and jealousies come out.

There’s a great deal to like with Bodies Bodies Bodies. The film works as a pretty good whodunnit very much in the style of something like And Then There Were None with how everything works. This is a horror movie in the sense that horrible things happen, but it’s honestly more of a deadly mystery than it is anything else. It works on this level—and it has to. The film has to work on that sort of base level for it to work at all.

But it also works as a commentary on wealth culture and privilege. All of the behavior, the drugs, the complete lack of consequence for much of the behavior smacks of people who consider having to call down to room service twice the definition of hardship. They have the same kinds of problems and foibles as anyone else, but their money makes them feel like their problems should make them the center of everyone else’s world. Couple this with their desperate use of social media, TikTok, texting threads, and the like, and you also get a commentary on current online culture. When the power goes out from the storm, everyone’s first concern is their inability to text each other—while they are in the same room.

Why to watch Bodies Bodies Bodies: A great commentary on privilege and online culture.
Why not to watch: You’ll be quite happy when most of these characters die.