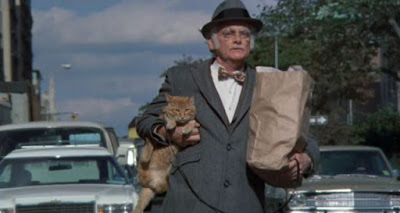 It’s mildly shocking when you look at Harry and Tonto, to realize that Art Carney was only 58 when playing the first of the two title roles. Carney’s character, Harry Coombes, is a widower in his 70s, and Carney does not look out of place at all. Some of that is going to be the cosmetics, of course, but a great deal of that is Carney himself. He did, after all, win the Oscar for this performance.

It’s worth saying at the start here that Harry and Tonto is much more a character study than it is a film with a serious plot. Harry is a widower living in New York. The building he has lived in for years has been bought and sold, condemned so that a parking lot can be put up. Harry doesn’t want to move, though, and is eventually forced out of his apartment. He and his cat Tonto move in with his older son, Burt (Philip Bruns) and his family. But bickering seems to be the norm here, in part because of Harry’s presence. He decides to go to Chicago to visit his daughter.

Tonto is going to guide a great deal of our narrative here. Harry originally plans to fly to Chicago, but won’t let Tonto’s carrier go through the x-ray machine. He opts instead for a bus, but leaves it when he determines that Tonto will not do his business on the bus. He eventually buys a car and drives, picking up hitchhikers along the way. In particular, he travels with a young runaway named Ginger (Melanie Mayron), who claims at various times to be 15, 16, and 18. He also visits an old flame in a nursing home who might or might not remember him.

Eventually, Harry makes it to Chicago and his daughter Shirley (Ellen Burstyn), but doesn’t stay long. Part of this is that Ginger is on her way to a commune in Boulder, CO. Part of it is that his grandson Norman (Josh Mostel), who has shown up from New York, has decided to go to Boulder as well. And so Harry decides to fulfill a lifelong goal of driving across country, eventually showing up in Los Angeles to see his youngest child, Eddie (Larry Hagman), who is desperate to put up a good front but is actually broke.

Along the way, Harry has a variety of adventures. He meets up with a man who sells some sorts of natural remedies, spends a night in jail for public urination, and hitchhikes himself, getting a ride from a prostitute. And—and believe me, this sounds like a spoiler but is not—Harry decides that he likes living in California. And that’s pretty much it.

It’s honestly difficult for me to come up with a great deal to say about Harry and Tonto in terms of the plot. There isn’t a great deal of plot—there are episodes that we witness Harry go through. Tonto is less a character than he is a plot device. We need Harry to not go on the plane—Tonto is there to get us there. It would be more interesting if Harry were driving; Tonto is the MacGuffin who will get Harry into a car.

There are moments of drama here in the sense that this is in large part a movie about relationships. It’s at the very least about the relationships in Harry’s life and how he deals with them. At the same time, it’s very much a comedy, or at least it very much wants to be a comedy. There are a number of repeated jokes, for instance. In New York, Harry and his neighbors spend a great deal of time talking about the television show Ironside. Cross country and in a Las Vegas jail for the night, Harry’s cellmate (Chief Dan George) asks Harry if he has ever watched Ironside, commenting that he thought it was about a native like himself.

If I had to describe this movie in two words, they would probably be “sweet” and “harmless.” There isn’t really anything new going on here. It’s a nice little character study about a guy who is very likable, even when he is randomly quoting literature, a reminder for us that the character is a retired teacher. But even with that, and even with this being a character study, there isn’t a whole lot in the way of actual character. Everyone is more or less a series of quirks, Harry having the most because we spend the most time with him.

So, ultimately, it’s good but it’s not any better than good.

Why to watch Harry and Tonto: It’s rather sweet.
Why not to watch: Beyond Harry and perhaps Tonto, there’s not a lot here.