Film: Fear
Format: DVD from NetFlix on The New Portable. 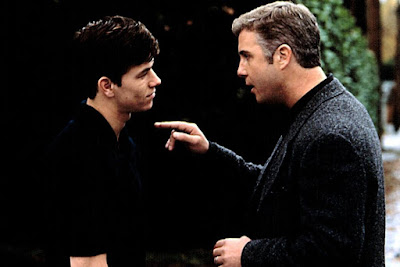 What can I say about Fear from 1996? I can say that it’s interesting to see Reese Witherspoon at this early stage in her career. Same for Alyssa Milano and for Mark Wahlberg. And yet for having three young stars (Milano actually had a substantial number of credits before this—technically so did Wahlberg even if most were as Marky Mark), Fear is a very standard thriller in a lot of respects. There’s nothing here that you haven’t seen multiple times, aside from Mark Wahlberg grinding on Reese Witherspoon.

To be more specific about what we’re going to get here, Fear is one of those movies where what begins as an innocent crush/fling/attraction is going to quickly become deadly. It’s also one of those movies where the bad guy is just a little bit smarter or ahead of everyone else and while he’s frequently doing things that are clearly illegal, he’s not quite going to get caught in those things until the very end. Everything is going to build up to a final confrontation, when everything is finally going to get resolved. You’ve seen this before. It’s a hell of a lot like Fatal Attraction for the high school crowd with an ending cribbed in many ways directly from Cape Fear.

Anyway, Nicole Walker (Witherspoon) is a high school student, relatively rebellious, in part because she is now living with her father (William Peterson) and his second wife Laura (Amy Brenneman). One day, she and her friends Margo (Alyssa Milano) and Gary (Todd Caldecott) leave school and head to a local restaurant. This is where Nicole sees David (Wahlberg), who is sort of the epitome of the movie cliché bad boy. When plans with her family fall through, Nicole heads off to a party with Margo where she once again sees David. The two are clearly attracted to each other and are soon…not quite dating, but seeing each other.

Eventually, David meets Nicole’s family and her father mistrusts him immediately. That’s initially chalked up to him being overbearing and overprotective and as something like fallout from his divorce years earlier. It’s soon evident that David is more than a little bit possessive, though. When he sees Nicole walking with Gary, David essentially kicks the shit out of Nicole’s friend because, well, another guy is touching his girlfriend.

Eventually, of course, Nicole is going to figure out that David is bad news. Specifically, she’s going to see him have sex with her friend Margo. But by the time this happens, it’s going to be too late. We’re going to end this romp with David and his pals invading the family home so that David can run off with Nicole, who no longer wants to be around him.

I’m of two minds with Fear. On the one hand, it’s not badly acted. In fact, there are some parts of it that I can see as being potentially triggering for some people. David is a nasty and ugly character, but also one possessed of the sort of charm that is common with sociopaths and psychopaths. Some of the elements here are certainly very reminiscent of many things talked about by people who have survived abusive relationships, meaning that this is not really a good movie choice for anyone traumatized by such events in the past. Naturally, since this is a movie, it gets carried away with itself in the third act. Yes, I’m well aware that situations like this do become violent. This seems a bit extreme in that it involves so many people essentially signing off on the abusive relationship.

The problem is this: there’s nothing here you haven’t seen. This is straightforward “love affair gone bad and turned possessive” story telling. The cast is good, though and there are a few chilling moments, but overall, it’s standard, and that’s a bit disappointing.

Why to watch Fear: It’s fun to see the early work of eventual stars.
Why not to watch: You’ve seen this before.