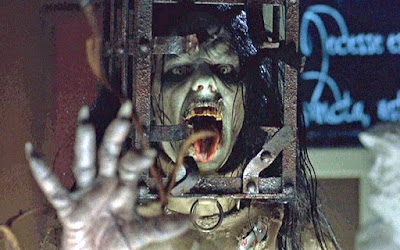 The things I do for this blog. Seriously. I’d seen Thir13en Ghosts before, and I knew it was a movie that I didn’t like much. It’s a shame, too, because there is a great deal of potential here. Part of that comes from the very loose association it has with the William Castle film 13 Ghosts. There’s also some really interesting ideas for those ghosts. The problem is that the execution isn’t that good. There’s a movie here that could be made, and be interesting, but it’s not this one. This could also be a very interesting miniseries, but that’s not this movie, either.

So we’re going to have two important events at the beginning of the film. In one, Cyrus Kriticos (F. Murray Abraham), with the assistance of Dennis Rafkin (Matthew Lillard) captures an extremely powerful ghost who seems to have the ability to kill people in the real world. During the attack, Cyrus himself is killed. We also get a little insight into the lives of other people in the Kriticos family. Specifically, we’re looking at Arthur Kriticos (Tony Shalhoub) and his wife and kids. His wife Jean (Kathryn Anderson), we learn, is killed in a fire.

Cut to the present, maybe half a year after the fire, and Arthur is raising his two children Kathy (Shannon Elizabeth) and Bobby (Alec Roberts) with the aid of a nanny named Maggie (Rah Digga). They’ve got money troubles and are living in a cramped space, but evidently that’s going to change. The death of Cyrus Kriticos initially seems like a sudden boon to Arthur and his kids. Evidently, they’ve inherited Cyrus’s house.

That house is going to be one of the two main features of the rest of the film. Constructed mainly of glass that has been etched with a number of Latin phrases (always a dead giveaway), the house is actually a gigantic infernal machine. See, the ghosts that Cyrus and Dennis had been capturing have been placed in the house in holding cells in the basement. Once the house’s clockwork mechanisms are set in motion, the infernal machine begins working, the ghosts in the basement are freed to wander the house (and potentially kill people) and the mechanism’s dark design goes to work. We’ll be graced by a return of Dennis as well as the sudden appearance of Kalina (Embeth Davidtz), who appeared early in the film as a foil to what Cyrus is doing.

So here’s the issue with Thir13en Ghosts despite, as former MST3K riffer Kevin Murphy has said, it’s interesting use of the rare letter 13: it’s not very good. There are a lot of really interesting ideas here and there’s a lot that could be done with this movie, but it’s simply not. We’ve got these ghosts floating around and, in a nod to the original Castle film, our characters can only see the ghosts when they put on special glasses. The original film came with “ghost viewers” that allowed the audience to see ghosts a la 3D glasses during the film. A great deal of time is spent showing us the ghosts and eventually explaining them. I’m going to graze spoiler territory here—this isn’t really anything having to do with the plot, but it does delve into the sort of mythology the film wanted to create.

The idea is that we’re given something that the film calls the Dark Zodiac, 12 specific ghosts that are needed to power this machine that was evidently planned by a mystic centuries earlier. We don’t really get the details—just the names of them, and the first nine are really generic in a good way. They’re named things like “First Born Son” and “Withered Lover,” which offers some interesting leeway in where we go. The last three, though, are really specific. They are, in order, the Hammer, the Jackal, and the Juggernaut. And it just so happens that we’ve managed to find ghosts nicknamed those very things, almost as if our mystic predicted they would eventually exist.

And with the exception of a couple of them, we’re only given quick glimpses. Some of them barely figure into the film at all. The real shame of it is that the DVD includes the backstory of each of them narrated by F. Murray Abraham. It’s honestly better than the movie.

What would have been better than this is series of short films about each of the ghosts, at least in most cases. It would have been a hell of a lot more interesting and even scarier. Instead, we get a pretty standard spook fest with no real scares beyond a couple of jumps, a very standard ending, and, honestly, a pretty exceptional set design.

Why to watch Thir13en Ghosts: The set design.
Why not to watch: The DVD extras are better than the movie.