Film: I Am Sam
Format: DVD from Sycamore Public Library on The New Portable. 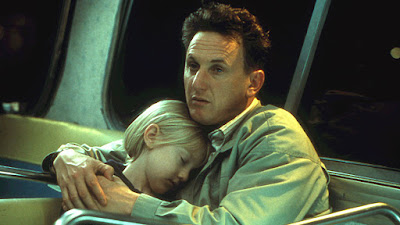 I’m not sure where to start with I Am Sam (or i am sam as it is written in the film and on the DVD case). It’s a movie that is simultaneously heartwarming and terribly disturbing. It’s one of the high points of Sean Penn’s career and also the sort of film that, once you dig below the clear emotional manipulation of the story, is nothing but problems. It’s a movie where the emotional pull is very clear, and at the same time so obviously wrong that it’s difficult to understand how the film was made.

Even if you haven’t seen I Am Sam, you almost certainly know at least one of the major plot points; Sam Dawson (Penn) is mentally challenged. We’re told early on that he essentially has the mental capacity of a seven-year-old. Coincidentally, Sam has a daughter named Lucy (Dakota Fanning) who is about to turn seven. Sam was abandoned by Lucy’s mother, a homeless woman, when Lucy was born. He works at Starbucks and raises Lucy with the help of his equally challenged friends and Lucy’s piano teacher (Dianne Wiest), an agoraphobic who lives across the hall from him.

Naturally, this is about as far as Sam can go as a parent before it’s clear that he’s not up to the task of raising Lucy on his own. A couple of incidents puts Sam in court with Lucy taken away from him. Not knowing what to do, he contacts Rita (Michelle Pfeiffer), a high-priced attorney who initially attempts to foist Sam off on another lawyer. Eventually, though, Rita decides to take Sam’s case pro bono when she determines that she has a reputation she’d like to soften.

What this means in terms of the film is that Rita is struggling with her family in many ways. She is always working, and so is her husband, and her son Willy (Chase MacKenzie Bebak) is caught in the middle, essentially abandoned. It is, perhaps, the most allegorical thing I’ve seen in a film in a long time. Rita is a fit parent because she is smart and makes a lot of money, but she ignores her son and her marriage for the sake of her job. Sam, mentally deficient and struggling, earning $8.00/hour, loves his daughter and does everything he can for her even though she is rapidly becoming much more intellectually advanced than he is. I didn’t need my English degree to see the message here.

And really, that’s the major problem with I Am Sam. This is a situation that is so untenable that I kind of question the motive behind the film. It’s clear that we’re supposed to be rooting for Sam because he truly does love his daughter and we’re supposed to dive in head-first with the idea that, as the Beatles-remake/cover soundtrack assures us, love is all you need. But it’s clearly not. Try as he will and as much as we may emotionally want that, there’s no way that Sam is a fit parent.

And yes, there’s no movie without this, and yes, it’s completely unfair. In the real world, I can’t imagine this story actually happening, and I’m the sort of person who will happily wax rhapsodic about the verisimilitude of movies like Dredd or the Harry Potter films.

I should talk about the performances here, since Penn’s is why this appeared on my radar. Penn, for whatever baggage he brings to a production is really very good. One of the things he does extremely well is play the part as honestly as he can. It would be a temptation to make Sam something he isn’t or to play him either for laughs or for much more pathos than the role deserves. Penn doesn’t; his portrayal is honest without being unfairly noble. This is probably the reason he was nominated. There’s no real judgment in his portrayal of Sam, and it’s honestly one of the best things I’ve seen him do.

As much as I desperately want to love I Am Sam, I can’t. I respect the hell out of virtually all of the performances, and it’s a hell of a good cast. That cast includes Laura Dern as a foster mom and has Brent Spiner showing up for a cup of coffee as a shoe salesman. There’s so much here that I want to like, but the premise of the film bothers me so much that I just can’t get beyond it.

Why to watch I Am Sam: Sean Penn is really good in this.
Why not to watch: Honestly, the plot is really problematic.