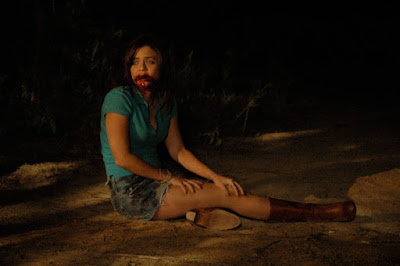 Siskel and Ebert used to call a particular breed of slasher film a “dead teenager” movie. Like it or not, that’s exactly what All the Boys Love Mandy Lane is. It’s a movie wherein we will reach the end credits with half a dozen or so corpses who, with their ages added together, would barely break the century mark. Most of the clichés that you expect in the genre are here, and while there are clearly some allusions to events like school shootings, there’s not much here that you haven’t seen at least a dozen times.

Mandy Lane (Amber Heard) has blossomed over the summer and now is suddenly irresistible to all of the boys at her high school. Dylan (Adam Powell), a high school meathead, more or less seems to think that commenting on her sudden “hotness” is the best way to get into her pants. He invites her to a pool party, and she consents to come, but only if her friend Emmet (Michael Welch) comes along, too. Emmet is less than popular at the school and spends most of the party being bullied by Dylan and others, who are trying to impress Mandy. In revenge, Emmet convinces Dylan to dive into the pool from his roof, but Dylan can’t clear the jump, smashes his head on the concrete, and dies.

By the end of the school year, Mandy has fallen in with the crowd that were Dylan’s friends while Emmet has become more and more of a bullied loner. As the school year ends, Mandy is invited to a weekend at classmate Red’s (Aaron Himelstein) family ranch. She agrees to go, and out goes a collection of potential teenage victims for the rest of the movie. The other people who head out to the ranch are vaguely individual but not really, so I’m probably not going to mention them by name. Honestly, they’re pretty interchangeable.

What follows is exactly what you expect when you know that this movie is a slasher. Before you know it, people start getting killed. Because no one is aware of this for some time, the partying continues. For those of us in the audience, the identity of the killer remains a mystery for about five minutes and then is completely obvious. The movie doesn’t want to try to surprise us with the killer’s identity, but with the killer’s ultimate goal.

I’ll be blunt—there are a lot of problems here. One of the first, and it’s a significant problem, is that we have to essentially believe that Amber Heard is the end-all be-all of teenly womanhood. We’re supposed to be on board with the fact that every guy on the planet is suddenly dumbstruck by her ravishing beauty. As the teens drive out to the ranch, we get a snippet of conversation from one of the cars where we they guys are more or less fighting over who has “dibs” on her.

The other thing is that it’s not that inventive. It wants to be, and it wants to be thought of as being an inventive and interesting slasher movie, one that might actually have something to say, but it doesn’t. It wants to draw parallels to Columbine in some respects—there’s an allusion to at least Eric Harris at one point—but it not only misses the target, it misses the entire dartboard. This becomes instead just another movie where a killer hunts people down and slaughters them. All the Boys Love Mandy Lane doesn’t even give us a lot of quality kills.

So here’s the thing—I’ve seen worse movies than All the Boys Love Mandy Lane. I’ve seen movies that have angered me, turned my stomach, or made me weep for the state of the film industry. I’ve seen movies that have had less going for them, bigger problems, and dumber plots than those issues with All the Boys Love Mandy Lane. But it’s one of the first times I legitimately can’t think of a good reason for anyone to watch this. There’s literally nothing here you haven’t seen done elsewhere and done better. This film is a cipher, and the less I have to think about it, the better.

Why to watch All the Boys Love Mandy Lane: I’m struggling here...
Why not to watch: You’ve pretty much seen this despite the minor new things.