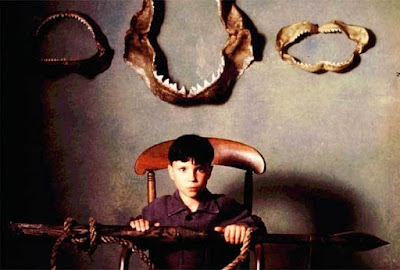 I wasn’t sure what to expect with The Reflecting Skin. I knew this was classified as a horror movie, but this is not the standard sort. There aren’t supernatural monsters seeking to devour the flesh of the innocent. There are no zombies here, no ghosts, and no creeping undead. That there is instead is sort of tawdry human evil the runs through the entirety of this film. There isn’t so much a sense of corrupted innocence here as there is of a world where there is nothing innocent, where even those we would normally call innocent are tainted in a way that was beyond their control, like people trying to live on a toxic waste dump. The world of The Reflecting Skin is one of banal evil, where everything is awful simply because everything is awful. It’s a depiction of the real world if the real world were somehow transported to Hades.

The Reflecting Skin is absolutely a horror movie despite the lack of supernatural boogey men. In fact, there is a mob of serial killers involved in the film, but they are not the focus of the story. What we have, in effect, is a confluence of events and ideas where the absolutely wrong thing happens in absolutely the right way for the worst possible outcome for everyone involved. The Reflecting Skin is a fever dream of fantasy, misinformation, miscommunication, and murder.

Post World War II, Seth Dove (Jeremy Cooper) lives with his browbeaten father Luke (Duncan Fraser) and his domineering mother Ruth (Sheila Moore) in the middle of nowhere in the house behind the family gas station. One day, Seth puts gas in the car of a group of suspicious young men who rather maliciously suggest that they will see him again soon enough. Seth’s father spends his time reading pulps and attempts to explain to him what a vampire is, which Seth doesn’t seem to fully understand.

Seth and his friends Kim (Evan Hall) and Eben (Codie Lucas Wilbee) spend their time antagonizing a British woman with the unlikely name of Dolphin Blue (Lindsay Duncan) who lives on her own. Their favorite prank is to inflate the frog with a reed and then shoot it with a slingshot to make it explode when she gets close to it. Seth is forced to apologize to her, and he has a very unfortunate conversation with her.

As it happens, Dolphin is a widow. Her husband killed himself after about a week of marriage for no clear reason. She has a series of keepsakes that remind her of him and that coincidentally make her look a bit like a ghoul or, well, a vampire. She also, speaking metaphorically, claims to be 200 years old and talks about how she hates being out in the day. In short, Seth decides that she is a vampire. And right about the same time he draws this conclusion, Eben disappears.

So we’ve got that part of the set up. Now we need the rest. Eben’s body turns up in the Dove family’s well. And it turns out that Luke Dove once had a same-sex “indiscretion” years before, so is immediately pegged as the town pervert and suspect. Not willing to undergo any interrogation, even for something he didn’t do, Luke douses himself with gasoline and lights himself on fire. Since there is now no adult male in the family, older son Cameron Dove (Viggo Mortenson) is sent home from his military stint in the South Pacific where he worked with various nuclear tests. Soon enough, Cameron and Dolphin begin a relationship, and Cameron starts to show the effects of radiation poisoning, which to Seth seem to mimic the effects of being in the thrall of a vampire.

I’m going to leave the plot there except to say that what is going to follow is nothing good and includes one of the most disturbing things I’ve seen in a movie, the sort of thing that I’m certain will stick with me for months and appear in my consciousness unbidden at odd moments.

If I needed to describe The Reflecting Skin in a single word, that word would be “bleak.” Everything about it is bleak, from the people to the landscape. It suffers from something many a movie does—child actors. Frankly, the kids aren’t that great. Jeremy Cooper does the best he can but there are moments here that just read as stiff, which you’re going to get with a kid.

This is one of those movies I won’t watch often because of how despairing it is. Every frame feels like a punch in the face. It’s brilliant in its own way, but not something for everyday consumption.

Why to watch The Reflecting Skin: You have not seen anything like this.
Why not to watch: This fever dream includes some pretty weak acting.

Posted by SJHoneywell at 1:31 PM