Feet (and Everything Else) of Clay

Film: The Golem: How He Came into the World (Der Golem: Wie Er in die Welt Kam)
Format: Internet video on the new internet machine. 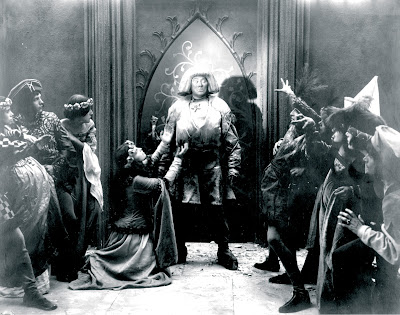 If you were ever a D&D player, you know a little bit about golems. One of the things that you probably know about them is they are prone to go out of control from time to time. This is especially true of the clay variety, the sort built by clerics. What you may not know is that a lot of this is a mythology that comes from the 1920 silent movie The Golem: How He Came into the World (or Der Golem: Wie Er in die Welt Kam if you prefer the original German). The fact that the clay creature is created by a priest and control is lost comes straight from this film.

Well…rabbi rather than priest. The title creature is built as a protection for the Jewish people in medieval Prague. The Jews, of course, are being subjected to pogroms and attacks, and have been recently commanded to leave the city by the Holy Roman Emperor. A knight named Florian (Lothar Muthel) is sent to deliver the news to the Jewish people, and specifically to Rabbi Loew (Albert Steinruck), who has predicted disaster for his people. However, Florian finds himself attracted to Miriam (Lyda Salmonova), Loew’s daughter, who is also the object of affection for Loew’s assistant (Ernst Deutsch).

Loew begs Florian to take a message for him to the emperor—he has been useful in preventing disasters in the past. He is granted an audience, and in preparation, he builds the Golem (Paul Wegener, who also co-authored and co-directed the film). The giant creature, made of clay, is brought to life by summoning the demon Astaroth and compelling the word of animation from him. Thus animated, the golem becomes the rabbi’s servant and is useful in preventing a disaster at the emperor’s court, thus allowing the Jews to stay in Prague.

The problem comes in the person of Florian. Loew knows that at certain times in the horoscope, the golem will be lost to his control when the spirit of Astaroth takes it over. He deactivates the creature before this happens, but his assistant brings it back to live to deal with Florian, and of course all hell breaks loose.

This is a fascinating film. There are clear parallels here to the Frankenstein story, enough that the two likely influenced each other. What I mean is that Mary Shelley almost certainly knew of the golem legend when creating her book, and Paul Wegener almost certainly knew Shelley’s story when he wrote this film…as well as the earlier, shorter version of the film from five years previous that involved much of the same cast but had an entirely different story (and was released in the U.S. under the name The Monster of Fate).

Nothing here is so impressive as the monster itself. Wegener looks as if he is made of clay, and as if all of his clothing is made of clay as well. He genuinely looks like a statue come to life, something quite impressive for a film that is a century old in less than a month. His performance is notable as well. Honestly, much of the cast is, well, silent movie cast. They gesticulate a great deal and emote a lot and have big ol’ gestures. Wegener is much more subdued, and for a modern audience, much more interesting and menacing.

It’s also a good story, albeit one that takes some time to get going. We don’t have anything that is really noteworthy concerning the more evil side of the monster until the very end of the film, although the summoning of Asteroth is pretty interesting.

There are multiple versions of this film available online. IMDb and Letterboxd suggest that The Golem is about 91 minutes long. I found versions considerably shorter than that (not the hour-long 1915 version) as well as a few about 10 minutes longer, which is the version I watched. I was not sad that there were an extra 10 minutes here. There probably is some fat that could be trimmed, but I think allowances need to be made for the time in which this was made. Filmmakers were still inventing the language of film, and many of the conventions we understand now were not known 100 years ago.

This is worth tracking down. If for nothing else, the appearance of the title creature is worth seeing—the picture is good, but it doesn’t do him real justice.

All of that said, I did find it difficult not to think of what happened in Europe a decade and a half after this film was made. If only the Jewish people could have had a golem built for them in 1933...

Why to watch The Golem: The costuming alone is worth it.
Why not to watch: It’s hard not to think of what happened a decade or so after this movie was released.